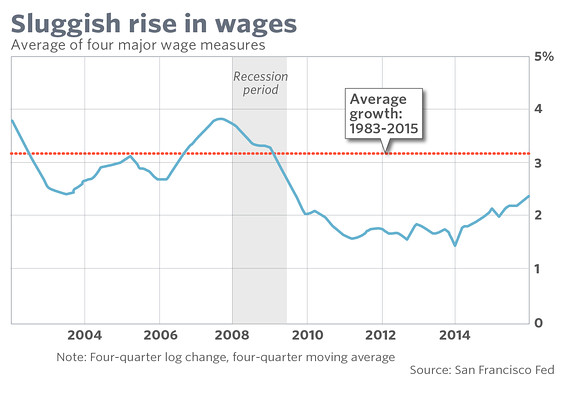 Wages have remained well below their longer-run average.
WASHINGTON (MarketWatch) — Slow wage growth since the Great Recession is not necessarily a sign of a weak labor market, but rather is due to special factors including higher-paid baby boomer retirement, according to new research released Monday by the San Francisco Federal Reserve.

The report suggests it could be a mistake for the Fed to wait for a pickup in wages before raising interest rates. In other words, the labor market may be stronger than it appears on the surface. But neither should policy makers jump to conclusions about inflation, which could remain in check for the near term.


Wages, or lack of thereof, have been a key puzzling factor in trying to pin down interest rate expectations. A decline in average hourly earnings was one negative in an otherwise solid job report for February released late last week.

Slow wages are often seen as a sign of low inflation and labor-market slack, two forces that allow the Fed to be patient in raising interest rates.

One factor is that low-wage workers are moving to full-time jobs. The vast majority of these new workers earn less than the typical full-time employee, so their entry pushes down the average wage, the researchers found.

In addition, the exit of higher-paid retirees have also pushed down wage growth. This “silver tsunami” is expected to be a drag on wage growth for some time.

“Correcting for worker composition changes, wages are consistent with a strong labor market that is drawing low-wage workers into full-time employment,” the study found.

Will this boost inflation? Not necessarily. As long as employers can keep their wage bills low, labor cost pressures for higher inflation could remain muted “for some time,” the researchers said.

However, if the lower-wage workers are less productive, companies may face a spike in their unit labor costs that they’ll presumably be forced to pass along in higher prices.

Wage growth has not kept up with inflation since I started working in the mid 60s, all that has grown is the manipulation of the statistics used to calculate growth and inflation.

I identify as vaccinated bitches!

Time for all the purple penguins to pony up a new solution factoring out the Qtips.
'I pledge allegiance to the flag of the United States of America; and to the Republic, for which it stands, one nation under God, indivisible, with liberty and justice for all!'
(except in California, New York, New Jersey, Michigan, Illinois, Massachusetts, parts of Oregon and WA state, and all of Washington DC)