stick that up your pipe and smoke it!

By Soren K.Group 20h ago

Via Gerardo Del Real and the Outsider

I’ve written since last year that we are approaching a dangerous time that lends itself to war, volatility, and in many parts of the world, revolution. Dangerous because the “powers that be” — central banks, governments — that are usually in charge of manipulating order are the institutions actually causing the chaos this time. There were several important developments last week — some obvious, some not so obvious — that provide important clues as to how this may play out.

The obvious event that everyone paid attention to was the 50-something barrage of missiles fired off at a Syrian air force base in what was said to be a response to the horrific chemical weapons attack that someone perpetrated on civilian men, women, and children. Although the missile strike was not said to be part of a permanent campaign in Syria there has clearly been a change in policy that Russia has been quick to denounce.

The response wasn’t exactly sugarcoated either. A statement issued on Sunday — and reported by Zero Hedge — by a joint command centre consisting of forces of Russian, Iranian, and allied militia supporting Syrian President Bashar al-Assad said that Friday's U.S. strike on the Syrian air base crossed “red lines” and it would "respond with force" to any new aggression while increasing its level of support to its ally.

Not exactly the friendly tone that once existed between Putin and Trump.

In the statement published by the group on media outlet Ilam al Harbi, the pro-Assad alliances said that “what America waged in an aggression on Syria is a crossing of red lines. From now on we will respond with force to any aggressor or any breach of red lines from whoever it is and America knows our ability to respond well.”

There is great potential for a rapid escalation of hostilities because of what’s at stake: Commodities and natural gas. 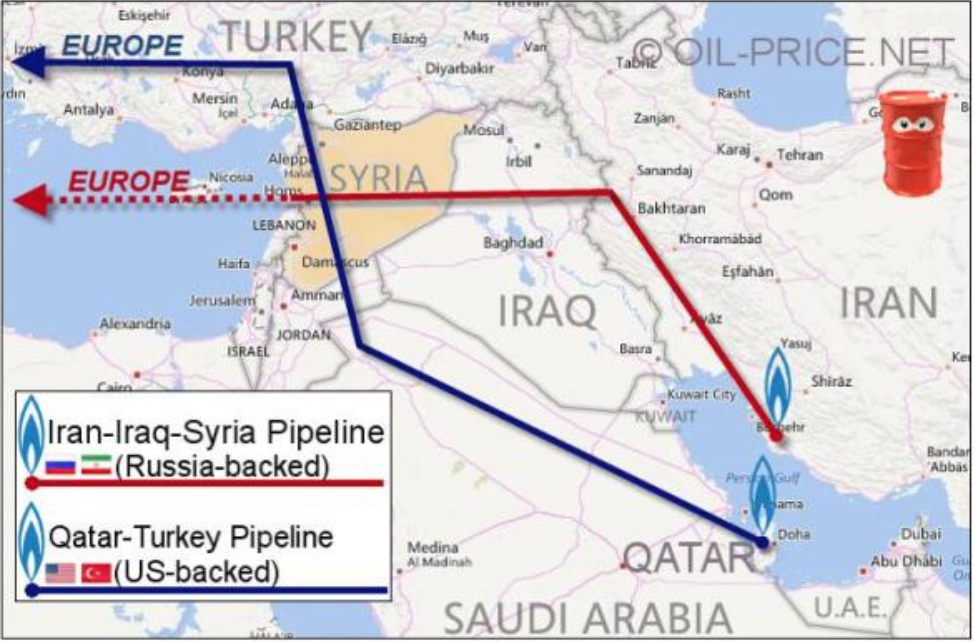 The map shows the competing Shia (Russia-backed) and Sunni (U.S.-backed) gas-pipelines into Europe. Robert F. Kennedy Jr. wrote an excellent piece titled “Syria: Another Pipeline War" that explains in detail the players and the game. You can read that here.

The immediate response by the precious metals was predictable: higher gold and silver prices. Gold briefly touched the $1,270 per ounce level before giving up nearly all of the gains. Silver rocketed to $18.43 an ounce before closing at $17.96 an ounce, down 1.54%. The not-so obvious developments that merit attention were the ADP jobs report on Wednesday and the Fed minutes that followed later in the day. Data showed that U.S. companies added 263,000 workers in March, the most since December 2014 and well above economists' expectations of 187,000.

Two statements in the minutes stood out.

“Most Federal Reserve policymakers think the U.S. central bank should take steps to begin trimming its $4.5 trillion balance sheet this year as long as the economic data holds up, Fed meeting minutes showed. The minutes also showed “some participants viewed equity prices as quite high relative to standard valuation measures.”

Both statements are important because they lend credence to how I speculate the next 12 months will play out. The major U.S. stock market indices will continue higher and the dollar will surge higher, fueled by capital flight out of Europe and Japan. The market is forward looking and I believe it’s starting to recognize the likely path forward.

The whispers of asset bubbles will grow louder and force the Fed to continue its policy of rate hikes while simultaneously beginning to trim the $4.5 trillion balance sheet. The market will call the Fed’s bluff if it appears Fed chairwoman Janet Yellen is serious about trimming the balance sheet. Any resemblance to a 2008 market collapse will force the Fed to reverse course and once again “stabilize” markets. Stabilize how? More QE.

It may come in the form of another name but it will be more of the same.

The prequel will be the soft launch of further rate hikes and a slimmer balance sheet. It starts with the rhetoric which has now been introduced in official “Fed speak” via the most recent Fed minutes.

The short-mid-term reaction will be what we saw last week. Higher dollar, lower precious metals prices, and lower bond yields in the U.S.

This will be short-lived, however, and the reaction by central banks worldwide will lead to a high-stakes game of central bank chess that will unfortunately have many very serious real-life consequences, but it will also ignite one of the most powerful bull markets in precious metals history.

The Soren K. Group of writers are currently 5 persons writing collectively. Backgrounds are professional, ranging from Finance to Banking to Real Estate. Topics include politics, markets, and Global Macro situations with a libertarian bent. Some posts are collaborative, some individually written.

I've said this along. Follow the money, Follow Oil.
Syria knows it is the lynch-pen for both transmission pipelines.
My WAG - Syria wanted a bigger piece of the financial pie than what was being offered.
So the Big Oil gods started pulling in Big .gov to create havoc in Syria either take the land ( Look where the fighting was /is)or win the influence of the Assad government ( Russia / Iran) and use their military assistance to support the pipeline territory.