A Case Study in Hatred and Genocide: The Allied Plans for the Annihilation of the German People

A bit of historical perspective...


A Case Study in Hatred and Genocide: The Allied Plans for the Annihilation of the German People
Posted on 11/24/2012by justice4germans

Measures for the Devastation of the Heart of Europe 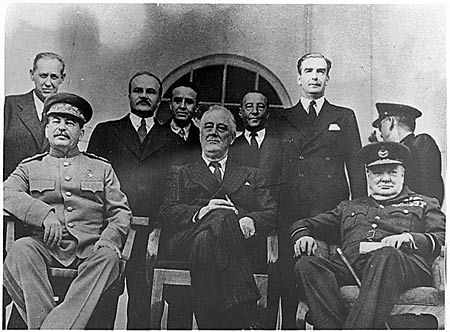 Long before the outbreak of the Second World War, and certainly long before the outcome of this European slaughter of brothers was foreseeable, the victors-to-be and their hangers-on had made plans for the disposition of Germany that contained fundamental violations of the Law of Nations. In addition to demilitarization and de-nazification projects there were plans for the destruction or expulsion of Germans from territories they have had inhabited for many centuries. For example,the expulsion of three and a half million of the Sudeten Germans was proposed in December 1938 by later Czechoslovakian president Edvard Beneš, that is, nearly a year before the official outbreak of the war – and he was not the first to make the proposal. During the Pan Slavic Congress held in Prague in 1848 the decision was taken that not only Sudeten Germans, but all ethnic Germans east of the line Triest-Stettin should be driven out. In summer 1917 Beneš and later president Minister-President Kramář gave the Allies a memorandum in which they demanded the dismemberment of Germany and the incorporation of large territories of the German Empire and Austria-Hungary in the Czechoslovakia that was to be formed.[1] After the signing of the dictate called the “Versailles Treaty,” nationalistic Czech and pan Slavic statements and demands were politically prominent; unfortunately there is not space here to discuss that subject in detail.[2] However, these demands were all more or less fanatically fixed on the expulsion of the Sudeten Germans.

These projects in violation of the Law of Nations were by no means merely the extravagant thoughts of chauvinistic, pan Slavic or Communist politicians: they were the official policy of national governments. The preamble to the Atlantic Charter expressly granted Czechoslovakia the proviso that, on the signing of the document, the expulsion of Germans could not be hindered. In September 1942 Beneš, ironically president of the National-Socialist Party, which after the war renamed itself the “People’s Socialist” Party, received support for his plans from the English government. London communicated that it had no objection to the deportation of the Sudeten Germans, a population that has been dwelling in what is now Czechia as long as the Czechs themselves. In May 1943 Beneš received a similar communication from Roosevelt and in June 1943 another from a Soviet liaison man in London, Alexander Bogomolov. In fact, the Czechs, and especially Beneš, had never intended to subject the goal of a de-Germanized Czechoslovakia to international supervision or even to any criteria of humane conduct. In July 1944, a notice from high authority was circulated in the Czech resistance to the effect:[3]

“We consider the possibility of the transfer of our German population. It can not be definitively stated that three millions of Germans in all can be transferred subject to some kind of international regulation. […] It is necessary that in the first days of liberation we ourselves remove many and that as many as possible guilty Nazis fly before us out of fear of a civil revolt against them in the first days of the Revolution, and that as many as possible who resist as Nazis and defend themselves be struck down by the Revolution.”

After the military capitulation it was no longer necessary for the Czechs to operate conspiratorially and they professed their bloody intentions publicly. On 31 May 1945 the Czech National-Socialist newspaper Slovo národa stated drily:[4]

“It will not be permitted for citizens of German descent to mingle with the Czech population.”

We should add to this remarkable announcement that it has been shown that the Czech exile government under Beneš worked single-mindedly for ethnic cleansing in what was to be a newly formed Czech Republic, and that this has been carried out in a manner disregarding human rights and against the Law of Nations, as will be shown below.

Even in Poland they dreamed of expansionist plunder raids and fantasized about Polish extension to Stettin and even to Berlin, and this long before September 1, 1939. The official program of the Polish Westmark Union contained the statement:

“The natural boundary of Poland is west of the Oder.”

A handbill put out by the Preparation Committee for the Grunwald festival in memory of the battle of Tannenberg in 1410 stated:

“We will take back what the Germans have taken from us on the Elbe, the Oder, and the Vistula!”

“One must clearly understand that Poland will not know peace until it rests itself on the Oder.”

On August 7, 1939, the Słowo Pomorskie of Thorn said this about the Germans:

“Therefore today we Poles say quite clearly: go back where you came from. On pushcarts drawn by dogs you came hither. You brought only a poor bedding. You can go back the same way.”

On July 20, 1939, the weekly Naród w walce proclaimed that Danzig must “remain Polish” and demanded that Germany surrender the East Prussian territory to Poland.[5]

During the war Poland received from London support similar to that received by Czechoslovakia. Churchill viewed the occupation of East Prussia by the Poles and the consequent mass expulsion of Germans with equanimity. At the conference in Tehran he admitted to Polish imperialism:[6]

“We believe that Poland unquestionably should be satisfied at the expense of Germany.”

Some 14 months later, at the conference of Yalta, Churchill confessed that there were many people in Britain who were troubled by the thought of deportation but stated that he personally had no qualms about it. In his view, six or seven million Germans had already been killed, and at least 1 or 1.5 million more would probably be killed before the end of the war.[7] These ideas for the future were by no means propaganda blather, but were the actual views of the British Prime Minister. At the 4th session of the Yalta Conference, on February 7, 1945, Churchill reinforced his anti-humanitarian conception by declaring “that he was not at all proposing to stop destroying the Germans.”[7] A week later the genocide of Dresden was committed by British and American bombers.