Don't white people deserve compensation for injustice too? OK, maybe not — but bribing them too.​

The unresolved cruelties of America's past are a common topic in our politics, and many believe Native Americans and African Americans deserve compensation for the injustice suffered by their ancestors. While in no way denying the merit of these prior claims, we might also consider those things about to happen — the things we know lie ahead. Aside from reparations for things in the past, we should also consider reparations for things in the near future, and compensate in advance for an injustice which has not yet happened, but certainly will.
This impending, gross injustice is the inexorable demographic shift that will, within decades, make white people a minority in America. Yes, the people who discovered America, explored the vast continent and built this nation from nothing (or so they like to insist), will at some point be less than half our population. From the birth of this nation, white Americans have been able to dominate the country by a combination of our grotesque political structure, our byzantine election laws and their aggressive, often unapologetic suppression of other groups. But now, white dominance is slipping away by the force of immigration and disproportionate birth rates, and the day looms when their tenure of dominance will end. And when that day comes, we can imagine them crying out, as they always do when things don't go their way, that it's just not fair.
If they did no more than mewl and whine about it, adding to the general din and clamor on the right, we might ignore it as background noise. But these people are dangerous and will act out their frustrated fantasies, as we all learned last Jan. 6. So, in the spirit of reparations for the injustice of this pending historical shift, and in the hope of preventing more outbreaks of violence — for which the white population is fully armed and prepared — we should consider payment to white Americans before demographics do their damage. Yes, pay them beforehand, soften the blow in advance and conciliate their good will while we still have the chance.

Now, many people will say this is a ridiculous proposal. (I would prefer to describe it as modest.) For one thing, there are many white Americans who accept their declining demographic with equanimity, and have no need of reparations for an injustice they do not perceive. Clearly, my proposal is not intended for these tolerant citizens (among whom, in full disclosure, I choose to count myself.) But there is a significant proportion of the white population that sees the matter in a different light, and in any society with a claim to being a democracy, everyone must be heard and their views considered — all the more so if the disaffected citizens are strongly disposed to violence.
In the last election, 74 million Americans voted to continue a racist, corrupt and incompetent administration, and the most vehement among these voters, supposedly convinced that they had been cheated of their election victory, acted out their frustration in a violent insurrection at the nation's Capitol. These people, too, are Americans — indeed, they insist they are the only real Americans, the living embodiments of American values— so we must appeal to them in a way they will understand. We must make them an offer they cannot refuse, or at least one they are highly unlikely to, while calling on what they prize most — the highest of all American values: money.
Fortunately, the white right in America has displayed such boundless avarice and self-regard that we may safely assume that its alleged fervor for electoral justice will diminish with the prospect of financial reward. After all, the white right sells its votes in every election, and has done so for decades. Its members take money in exchange for their ballots when they vote for the party that promises them the largest tax cut. To be sure, that money is cleverly disguised in the garb of reduced taxes, but it's a sale nonetheless. Indeed, we might point out to these citizens that selling their votes for a tax cut amounts to being paid with their own money. Just imagine how much more appealing it will be to sell their vote for other people's money.
A new federal agency might be required to administer this, but it's unlikely that the white right's aversion to "big government" would extend to an entity that serves its own financial interests. How will applicants prove they are qualified? All they need is a copy of their birth certificate (a short form will do), and also a supporting document to establish "whiteness," for example, membership in any established organization of the far right: the Proud Boys, Three Percenters, Oath Keepers, Boogaloo Boys, Ku Klux Klan or, if we must, the spineless sycophantic rump remnant of the white right known as the Republican Party.
Once the qualified pool is identified, how are we to determine the amount to pay? For reasons explained below, I suggest $5,000 — paid every two years, coinciding with federal elections, for a period of 20 years. This would spread out the financial burden over an extended period of time. Recognizing the political views of the white right, the program would have to be funded with no new taxes; one method that comes to mind would be ending our current subsidies for Afghan drug lords and using this money to address injustice in our own country. Who would object to something so sensible?

And how will the money actually be paid? One method seems especially appealing. It's widely understood that many people on the white right, if not most, carry some degree of financial burden, often in the form of crushing credit card debt. I suggest that the biennial $5,000 should be paid directly toward the qualified white applicant's credit card debt. That is, directly to MBNA, Citibank, Capital One and so forth — such lenders would certainly embrace this bold reform, which in turn would relieve them from the burden of chasing down deadbeats from one rural forwarding address to another, while members of the white right would be liberated to charge even more to their credit cards and American retailers (especially those who sell liquor, guns, pharmaceuticals and electronics) would have a fresh infusion of cash. It's a win-win-win!
On the farthest fringes of the white right there may indeed be some solvent citizens who will condemn this program as socialism. But really, is there anyone within that demographic who has ever rejected a Social Security check, Medicare benefits, a military pension or so-called socialism in any other form? Certainly not. Of course, they will insist that their benefits have been fairly earned or paid for with salary deductions over a lifetime, and that socialism means any benefit that isn't earned or paid for, like welfare. We all know that money paid to white people, by definition, cannot be welfare. They, after all, have always insisted that government must never give anyone a free ride.
Well, OK: Let's take them at their word. If we are to provide them with reparations for an injustice that has not happened yet, and which some might describe as no injustice at all — this dreaded demographic shift which they call replacement, neglecting to mention the millions of people who were already here but replaced by Europeans — and if they insist on the principle of no free lunch, then they should be willing to meet one simple condition: In exchange for these payments of $5,000 every two years, they must agree not to vote in federal elections for the next 20 years. That's it: Take the money, and give up your vote.
Who could possibly object? In the past, this cherished American demographic has sold their votes for tax cuts and symbolic culture-war policies, and then had to bother to vote in order to get what they wanted. Now they will sell their votes for cash upfront — and then simply stay home on Election Day. Such a deal! They'll have the money in hand and be spared the bother of figuring out which candidate is offering them a bribe. No more tiresome thinking about the issues, no standing in line at the polls, no anxious wait for the vote count — and no reason to care.
The biennial amount of $5,000 might have to increase gradually over the period to maintain continued support, lest the white right begin to think that $5,000 is not enough and their new entitlement is not keeping up with the cost of living, leading them to the firm conviction that it's not fair! But whatever the cost, the return on investment for the rest of the American public will be quickly apparent. We can readily imagine the benefits of having this system in place for the next 10 biennial election cycles, beginning in November 2022. With the votes of the white right neutralized over a 20-year period, Americans may at last put an end to the Electoral College, voter suppression, gerrymandering, the filibuster and other forms of electoral chicanery that have perpetuated minority rule since the founding of this country. Indeed, we might even decide to pay reparations to those other Americans who believe the debt to them is long overdue.
Moreover, there will be the added benefit of a greater sense of security, with the hope that the white right, having received reparations before demographics makes them a minority — not to mention long before any hypothetical discrimination or oppression — will accept its new status with equanimity. And perhaps, just perhaps, with this system in place we may even hope that the white right will at last give up its vision of crushing the rest of America under their boots. 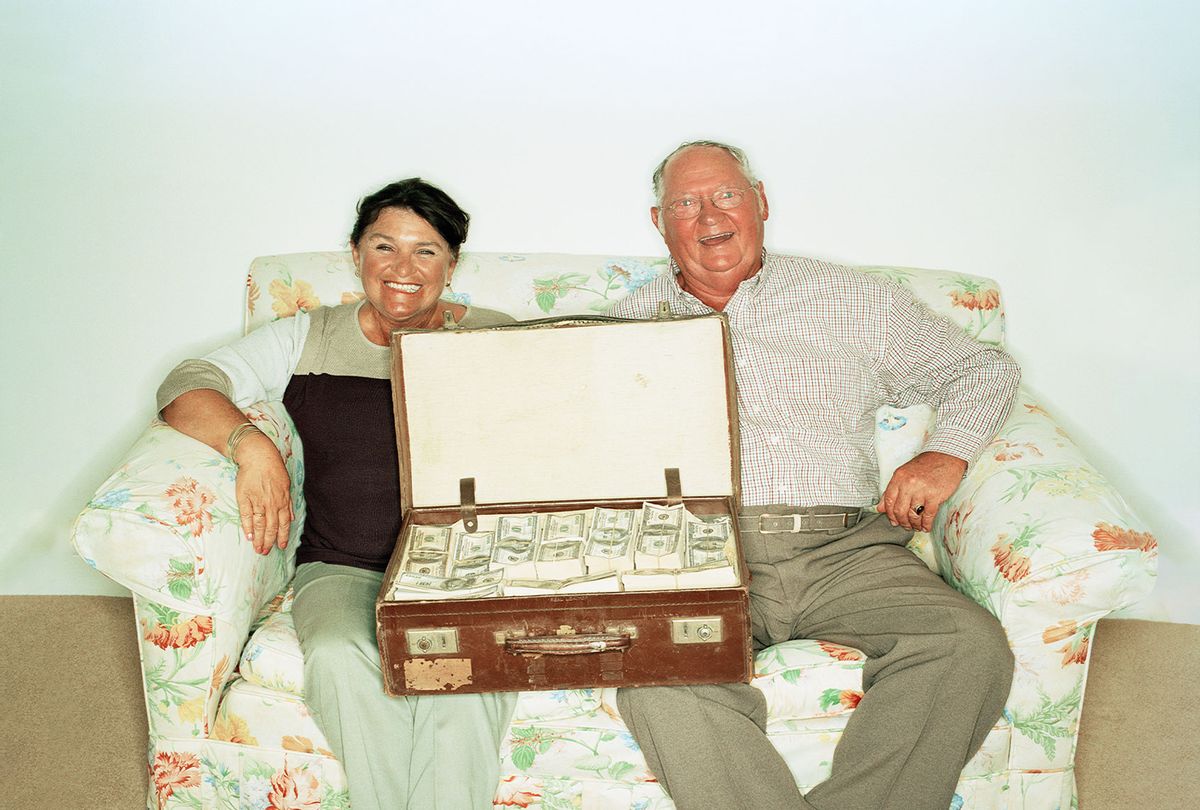 Don't white people deserve compensation for injustice too? OK, maybe not — but bribing them is another story

There is already a bill in Congress for white reparations. Compensation to all white skinned people of European decent are to receive 10 free dance lessons.

edsl48 said:
In the last election, 74 million Americans voted to continue a racist, corrupt and incompetent administration, and the most vehement among these voters, supposedly convinced that they had been cheated of their election victory, acted out their frustration in a violent insurrection at the nation's Capitol.
Click to expand...

See...white people are awful. The nerve of them ray-cis bigots to think they should get to vote for who's president and to have those votes counted.

...and the deaths attributed to those allegedly ray-cis "insurrectionists"? Yeah...5 white people.
Hypocrite says "If you don't hold it, you don't own it!" ...turns around and buys PM "shares" from JPMorgan.
"It is no measure of health to be well adjusted to a profoundly sick society." ~ Jiddu Krishnamurti
"None are more hopelessly enslaved than those who falsely believe they are free." ~ Johann Wolfgang von Goethe
“In individuals, insanity is rare; but in groups, parties, nations and epochs, it is the rule.” ~ Friedrich Nietzsche™

How about starting by giving ALL my money back from taxation.
As Newton said, for every male action, there is an unequal and opposite female overreaction.
You must log in or register to reply here.
Share:
Twitter Share Link