After confiscating much of the nation's wealth, India's government wants to give it back to the peop

After confiscating much of the nation's wealth, India's government wants to give it back to the people as welfare

After implementing a sudden monetary policy that wiped out a great deal of the people's wealth and set back the economy several years, India's Prime Minister now is looking at trying to save his election chances by offering up free money to the people under the guise of a Universal Basic Income.

In late 2016, Modi declared the two largest currency denominations no longer legal tender overnight, and gave the 1.3 billion inhabitants approximately a month to turn their currency into the banks. In response to this, the Indian people rebelled with many of them trying to exchange their currency for gold and gold jewelry rather than deposit them in the banking system that less than 40% of the population actually trusts.

Three months later, and with support falling everyday for the Prime Minister, the government is now rushing to implement a new policy which would accelerate the digitization of their monetary system, while also attempting to be benevolent by introducing free monthly welfare checks to large portions of the population. 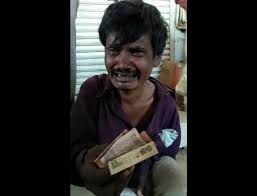 Prime Minister Narendra Modi shocked his country and the world in November 2016 by announcing that he would fight corruption by rendering 86 percent of the country's currency worthless. The decision wreaked havoc with India's economy for several months, but Subramanian believes that the worst is over, now that plans for a remonetisation are in place.

"Briefly, the costs include a contraction in cash money supply and subsequent, albeit temporary, slowdown in GDP growth; and benefits include increased digitalization, greater tax compliance and a reduction in real estate prices, which could increase long-run tax revenue collections and GDP growth," the report reads.

The report also lobbied for a Universal Basic Income (UBI) program to replace India's innumerable social-welfare programs. India has over a thousand such measures, but UBI could replace them all in a system virtually impossible to exploit.

A UBI in India would provide every citizen, regardless of net worth, a monthly payment with no strings attached. It can be used to provide for basic needs, the theory being that it will be enough to prevent poverty, giving recipients the ability to seek education and recover from economic hardship. - Sputnik News

And that's how you buy votes.
​
The market value of precious metals is, as that of all other things, in the compound ratio of their utility and of their scarcity.

Something that everyone gets will become the new zero. hyperinflation will be triggered.
Those of us who can count to potato must do it for those who cannot !

Universal basic income..... that hits your "ebt" card so it's all digital & they control it and you. Probably can't be exchanged for cash and only a small amount is allowed to be rolled over every month or it is taken back. So it' spend what we give you so we are in total control of the cash flow of the country.

Whatever happened to people working for a living or or joining the services? Something other than looking for as much free stuff as you can get. I never like the free stuff my mom was always reaching for. It usually cost her or me too much time or aggravation.

With the stroke of a pen, this could happen here... again.

UBI sounds frighteningly like the gov will demand all paychecks be deposited and will allow you enough of your earnings to keep working. The banks will not let you withdraw more cash than bus fare and a coffee.
The meaning of life is to give life meaning.

If they keep doing these things, alternatives such as bitcoin or maybe even gold or silver will become the people's currency.
Arm Leg Leg Arm Head
You must log in or register to reply here.
Share: Twitter Link