What the heck is a 'negative' interest rate?

Bond king Jeff Gundlach hates just about everything these days.

The elite investor thinks the spike in oil prices is unsustainable, U.S. stocks have little room left to rise and junk bonds will get trashed by a wave of energy defaults.

But the billionaire founder and CEO of DoubleLine Capital saves his darkest warning for fans of negative interest rates.

"Negative rates are really bad," Gundlach cautioned during a webcast on Tuesday afternoon. "It's going to backfire like an old Model-T."

Central bankers in Europe and Japan have embraced negative rates as a way to stimulate growth -- despite the fact that little is known about the consequences because they've never been tried on a grand scale before. Even the U.S. Federal Reserve recently sounded open to the idea, in a crisis at least.

But Gundlach has a message for the Fed: "We don't want negative interest rates," he said, adding that it would send "banks crashing and stock markets tumbling." 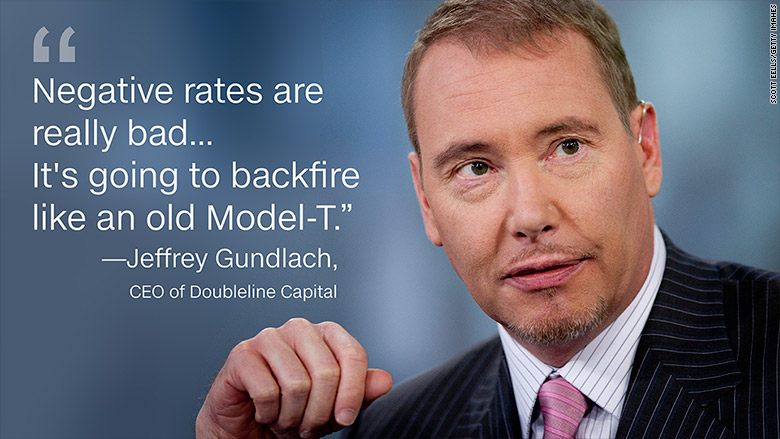 Gundlach believes negative rates are already spooking global markets. He correctly noted that stock markets in both Europe and Japan are sitting below the levels they were at prior to the introduction of negative rates.

"There seems to be ample evidence that negative interest rates are more harmful than helpful. I certainly hope we don't go there," Gundlach said.

Negative rates pose serious challenges for banks. In theory, negative rates mean that instead of someone being rewarded for storing money at a bank, depositors are penalized. Of course, banks in Japan and Europe aren't actually charging customers. These banks are paying the penalty themselves -- much to the dismay of shareholders.

Worries about negative interest rates contributed to a huge plunge in European bank stocks earlier this year. At one point Deutsche Bank (DB), Germany's biggest bank, plummeted to its lowest price ever.

As you may have guessed, Gundlach isn't a believer in the big rebound in America's stock market since mid-February. He sees a "very poor" risk/reward backdrop for stocks, warning the S&P 500 may have just 2% of upside yet 20% of downside.

Back in December prior to the big market plunge this year Gundlach warned that U.S. stocks were "whistling through the graveyard." DoubleLine did buy stocks around February 11 when the markets bottomed, but don't expect to see the firm doing so now.

Like Goldman Sachs, Gundlach believes the 42% spike in oil prices is too extreme, especially because the supply glut still lingers.

"Oil inventories are through the roof," he said.

The financial stress caused by cheap oil is also likely to spill over into the junk bond market, Gundlach warned.

"Defaults are going up as sure as the day follows night," he said.

So what does Gundlach like? He still thinks gold is going to rise to $1,400 an ounce due to a lack of confidence in central banks. Gundlach isn't the only one loving gold though. The yellow metal is up 19% this year.

Fittingly, Gundlach admits that rally makes him "a little bit nervous." What doesn't these days?

All these guys do is talk their books. Can't believe a single word they say. They don't really believe anything that won't make them richer. Period.
Share:
Twitter Share Link