China is only months away from burning through its currency reserves

SocGen claims China is only months away from burning through its currency reserves
By Sue Chang
Published: Feb 4, 2016 1:47 p.m. ET

Beijing may be forced to float the yuan within six months 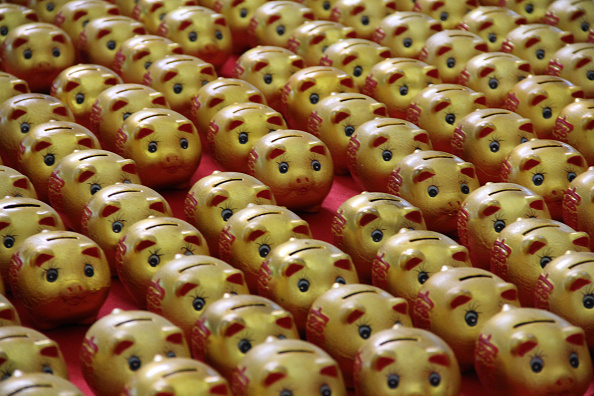 
China’s reserves may not be sufficient if its chickens come home to roost.
China is burning through its foreign-currency reserves at such a blistering pace that the country will run down its cushion in a few months, forcing the government to wave the white flag and float the yuan, says Société Générale global strategist Albert Edwards.

“The market remains content that massive firepower remains to support the renminbi. It does not,” Edwards, a perma-bear with a propensity for doom-and gloom-prognoses, said in a report published Thursday.


Société Générale, using the International Monetary Fund’s rule of thumb on reserve adequacy, estimates that China’s foreign-currency reserves are at 118% of the recommended level. But that cushion is likely to evaporate soon on a combination of capital flight and the continuing effort by financial authorities to stem a dramatic drop in the currency. 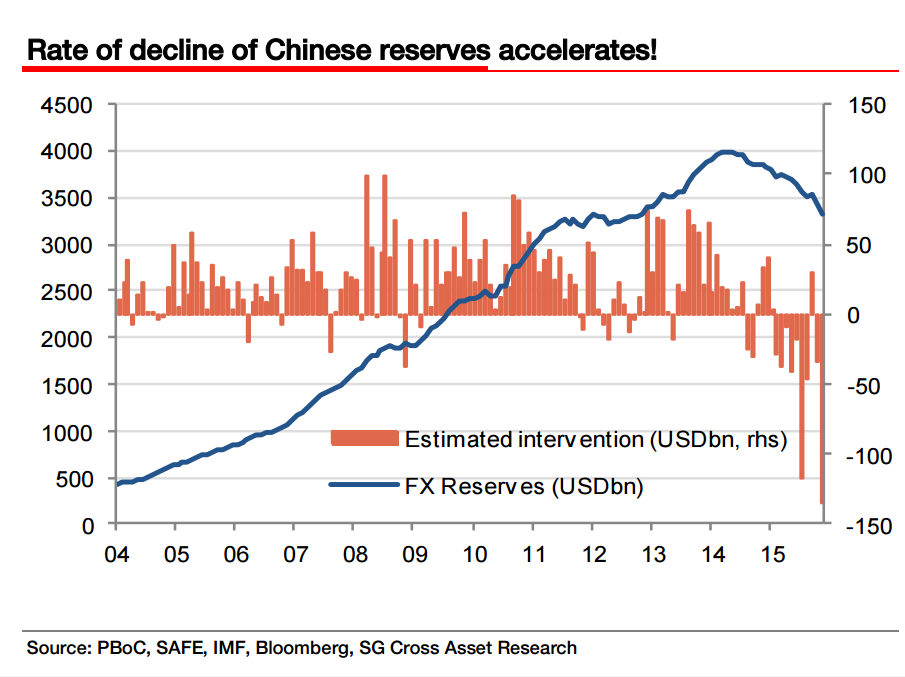 
China’s reserves totaled $3.33 trillion in December, according to official government data. Edwards estimated that China’s foreign-exchange reserves fell by about $120 billion in January, a trend that is likely to continue in the foreseeable future.

That is likely to trigger a “tidal wave of speculative selling,” which in turn will force the People’s Bank of China to allow the yuan to freely float within six months.

The yuan currently moves within a trading band set by the People’s Bank of China that the central bank can change at will.

“We estimate that if capital outflows maintain their current pace, the PBoC would be unable to defend the yuan for more than two to three quarters,” Wei Yao, Société Générale’s China economist, said in a report published earlier this month.

“China’s reserves have already fallen by $663 billion from mid-2014, and a further decline of this scale would start to severely impair the Chinese authorities’ ability to control the currency and mitigate future balance of payments,” she said.

Against this backdrop, Société Générale is projecting the yuan USDCNY, +0.1233% to sink to 7.5 against the U.S. dollar this year, significantly weaker than 7 yuan to the buck predicted by most economists. The dollar is currently at 6.56 yuan.

Edwards and his colleague join a growing group of economists and investors who are sounding the alarm on China’s approach to managing its yuan exchange rate.

On Wednesday, Kyle Bass, founder of hedge fund Hayman Capital Management, expounded in depth on why he is shorting the yuan and the problem of escalating bad loans in China’s banking sector.

“This isn’t an aberration. This isn’t a speed bump. This is China’s excess—let’s call it misallocation of capital—coming home to roost,” Bass said in an interview with CNBC.


Eric Chow on Investing in the Year of the Monkey
(3:24)
The Value Partners' hedge fund manager sits down with Barron's Asia Isabella Zhong to discuss his outlook for China's economy and why a Hong Kong property developer is one of his favorite picks.

What is particularly noteworthy about Edwards’ scenario on China is its similarity to how Korea’s currency crisis unfolded in 1997.

A crisis of confidence in the country sparked a surge in withdrawal of funds that eventually forced Seoul to float the Korean won in 1997 in exchange for billions in emergency loans from the IMF. The won, until then, had been pegged to the U.S dollar and was only allowed to trade in a limited daily band.

China last year devalued the yuan, a move that roiled stock markets around the world. Chinese authorities have indicated that they will introduce further changes on how the currency is valued against its peers, which analysts believe will give the government more flexibility in nudging the currency in the direction that they desire.

Barclays, meanwhile, projected China’s reserves to have dropped by as much as $140 billion last month to $3.19 trillion — or more than Edwards has forecast. “If correct, this would be the biggest monthly drop in foreign exchange reserves on record,” said David Fernandez, an analyst at Barclays, in a note.

The PBOC is expected to report on the level of its currency reserves this weekend.

With the pace at which the global economic landscape has changed since January 1st, 6 months seems like a long haul to burn through their FX reserves.

Meanwhile, China has just opened up a new bank, The AIIB with a 100B in capital. Yes they partnered with 57 countries or so (minus the US) but how does the report correlate with this new banking scheme? Hmmm.....
Slow is smooth.....smooth is fast...

and where does one propose that capital came from?

I said that in December. Their stock market is sucking a lot of it plus their debt-to-GDP ratio is 350%. They have big monthly payments.

Well, there's only one answer for China and the rest of the world...QE to the moon! Remember, they actually think they can print their way out of this mess! Besides, they instituted/joined a new bank that can make all kinds of loans so China will just borrow back it's own deposit and the deposits of everyone else. This size of loan should make the new banks balance sheet look really good.

Wow! That's scary! I think I'm gettin' the hang of this insanity stuff...
Orthodox Jedi
Make mine a vodka and vicodin latte.
You must log in or register to reply here.
Share:
Twitter Share Link