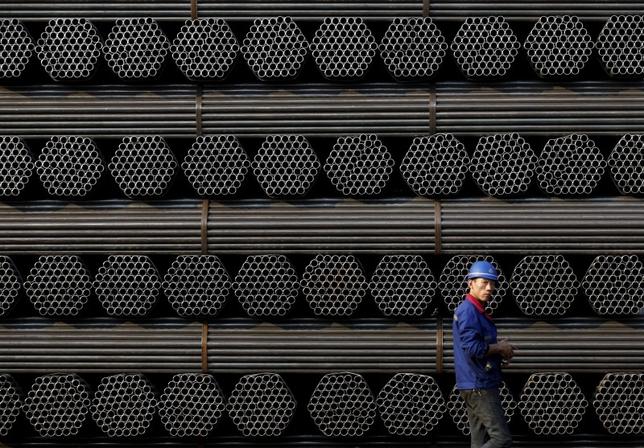 A worker walks past a pile of steel pipe products at the yard of Youfa steel pipe plant in Tangshan in China's Hebei Province in this file photo dated November 3, 2015.
Reuters/Kim Kyung-Hoon/File Photo

Chinese commodities dived on Monday, led by 6 percent falls in steel and iron ore futures, as deepening worries about China's demand extended a fortnight of sharp drops and false rebounds in the country's market for industrial metals.

To limit speculation on futures from steel to coal, the country's three commodity exchanges have taken aggressive measures, including raising trading margins and transaction fees, and widening daily movement limits.

The big market swings and the response of authorities have raised concerns about the risk of contagion for global markets, particularly after last year's stock boom and bust.

On Monday, the Dalian Commodity Exchange said it would continue to strengthen its market monitoring and may raise transaction fees further to curb speculation.

The most-traded rebar, or reinforced steel, on the Shanghai Futures Exchange posted its biggest daily fall on record on Monday. It hit a downside limit of 6 percent to 2,175 yuan ($334.41) a ton, the lowest since April 7.

September iron ore futures on the Dalian Commodity Exchange also tumbled by their daily permissible limit of 6 percent to 388 yuan a ton.

Related Coverage
Spot prices of billet, a semi-finished steel product, regarded as a key reference point for the physical market, have tumbled over the last few days, traders said.

The declines followed customs data on Sunday that showed iron ore imports fell 2.2 percent in April from March, while copper ore and concentrate imports shed 8 percent on the month.

Talking down the prospect of any quick economic recovery, state-owned People's Daily said on Monday that China's economic trend will be "L-shaped", rather than "U-shaped", and definitely not "V-shaped".

"Steel demand is seasonally weaker between June and August, while output keeps rising, which has been interpreted by investors as the turning point of the economic recovery," said Zhao of Merchant Futures.

Speculative interest has focused on steel since it is seen as a lead indicator for the commodities complex, which is used at the very early stage of projects.

"In the next two to three months we might see some seasonal factors kicking in to cool prices down and drive speculative buyers away," said Judy Zhu, an analyst with Standard Chartered in Shanghai, adding that demand should gradually improve over six to eight months.

China's Dalian soybeans slid for a fourth consecutive session on Monday to their lowest in nearly three weeks even as strong demand from the world’s top importer of the commodity drove the benchmark U.S. prices higher.

Cotton futures on Zhengzhou Commodity Exchange finished down 2.2 percent, the lowest since April 18.

(Additional reporting by Naveen Thukral in SINGAPORE and Melanie Burton in MELBOURNE; Writing by Ed Davies; Editing by Ryan Woo)