Something unusual is happening in the gold market.
First we had unprecedented dysfunction in the gold futures markets with dramatic paper and physical price divergences amid virus-inspired geographical shortages for deliverables.

"I’ve never seen that before," said one gold trader who has been in the market for 30-plus years.
Saxo Bank's head of commodity strategy, Ole Hansen, observed that a lockdown is occurring in two biggest gold hubs in the world, New York and London, so many traders are working from home. "This has caused a breakdown in the marketplace", he said.
“There is no price discovery in the market right now,” he said Tuesday morning. “If you need to borrow gold in the OTC [over-the-counter] markets right now, you are going to pay a king’s ransom.”​
Then we had the even more stunning negative prices for front-month WTI crude futures as prices converged to negative spot prices at expiration/delivery, thanks to a lack of storage and ETF-driven illiquidity issues. This sparked major losses for some very large market brokerages and clearing houses, among them, Interactive Brokers:


CNBC: "Across the industry, do you think there is going to be some really serious pain?"
Peterffy: "There is about another half a billion dollars of losses that somebody is sitting on... and I do not know who those folks are."​
We also reported that one distinct possibility is that one or more clearing members had run out of physical, something that was indirectly confirmed by the COMEX' own report exposing the conditions behind the physical crunch. In fact, we reported on this distinct possibility on more than just one occasion:
So, it is with great interest that we note that the CME Group, said its precious metals-trading COMEX subsidiary entered into an amended credit facility for a $7 billion revolving secured credit facility.
As Bloomberg reports, in a U.S. Securities and Exchange Commission filing, CME entered into an amendment to its 364-day multi-currency credit facility with Bank of America N.A., as administrative agent, Citibank N.A., as collateral agent and collateral monitoring agent and some of the banks under its existing facility.
The amended facility is for a multi-currency revolving secured credit facility of $7 billion, which is eligible to be increased to $10 billion.

Specifically, the filing says, the new credit facility is "intended to provide temporary liquidity to CME in the event of a clearing member default, a liquidity constraint or depositary default, or in the event of a delay in the payment systems utilized by CME."
Which begs the question: is there a potential $7 billion shortfall about to emerge as a COMEX member collapses - whether due to a physical gold shortfall or otherwise - and if so, what happens to the price of gold if the market suddenly realizes there is a massive hole backing billions in gold paper deliverables? While we hope to find out soon, we bring up a recent tweet from Jeff Gundlach on a topic we have covered extensively in the past, namely the divergence between gold open interest (deliverable claim) to registered gold (actual physical holding) disconnect...
NEVER MISS THE NEWS THAT MATTERS MOST
ZEROHEDGE DIRECTLY TO YOUR INBOX
Receive a daily recap featuring a curated list of must-read stories. 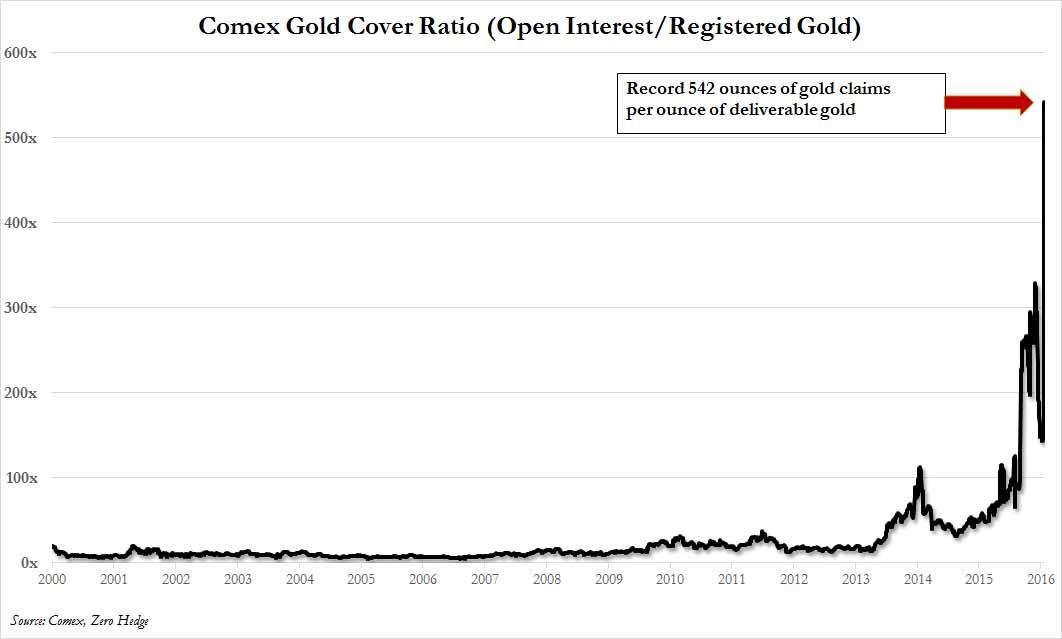 ... and how if all gold longs who owned gold on paper demanded physical delivery the price of the yellow metal would explode:


I spoke about how physical gold is far better that “paper gold” for the opposite but related reason that tanked May WTI today. What if the “paper gold” vehicles wanted to take delivery of their futures and the counter party couldn’t deliver?
— Jeffrey Gundlach (@TruthGundlach) April 20, 2020​

All economic systems are capitalist. The only difference is what the capital is.

GOLDZILLA said:
is there a potential $7 billion shortfall about to emerge
Click to expand...
No, there's potential for MORE see below V V V

GOLDZILLA said:
eligible to be increased to $10 billion.
Click to expand...
don't worry folks, there's plenty for everyone

i read here all the time, that's not a smart play :)
no one wants me to become unreasonable

I might have to get out my scuba gear to look for boats at the bottom of the sea.
All economic systems are capitalist. The only difference is what the capital is.

ZZZZZ said:
"They're gonna need a bigger boat."
.
.
Click to expand...
Why? Paper checks don't weigh much at all or take up very much room.
"Education consists mainly of what we have unlearned." - Mark Twain
"Whenever you find Yourself on the side of the Majority; It is time to Pause and Reflect." - M. Twain
"Torn between the political comfort zone of the official story & logic, pushing me into the uncertain and lonely future.." - Andrei Nekrasov
You must log in or register to reply here.
Share: Twitter Link