Crude falls from 2016-high, as Al-Naimi downplays prospects for cuts 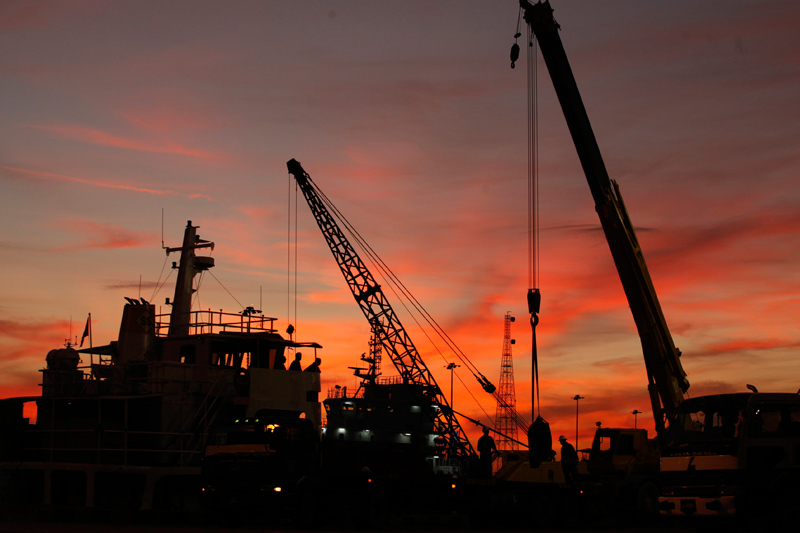 Investing.com -- Crude futures retreated from 2016-yearly highs before paring considerable losses on a volatile day of trading, as Saudi Arabia's oil minister brushed off the potential for extensive output cuts among a host of major producers and investors reacted to a stronger than expected U.S. inventory build last week.

On the New York Mercantile Exchange, WTI crude for May delivery traded in a broad range between $40.09 and $42.06 a barrel, before settling at $41.67, down 0.50 or 1.19% on the session. U.S. crude futures halted a three-day winning streak when they surged more than 16% to reach their highest level on the calendar year. A day earlier, the front month contract for WTI crude settled above $42 to hit its highest closing level since late-November.

On the Intercontinental Exchange (ICE), brent crude for June delivery wavered between $43.77 and $44.94 a barrel, before closing at $44.06, down 0.59 or 1.34% on the trading day. Since falling to their lowest levels in more than a decade in mid-February, the international and U.S. domestic benchmarks of crude have each jumped by more than 30%.

Both WTI and brent futures erased some of Tuesday's gains in overnight trading after Saudi Arabia energy minister Ali al-Naimi downplayed prospects of coordinated production cuts between Russia, Venezuela, Qatar and the Saudi kingdom at a highly-anticipated meeting in Doha on Sunday. It came one day after crude prices jumped more than 3%, after diplomatic sources told Russian news agency Interfax that Saudi Arabia and Russia had formed a consensus on the framework of a deal to cap output near their current levels. Asked on Wednesday on the possibility that his nation could reduce production at Sunday's meeting, Al-Naimi brusquely told reporters from the Al-Hayat newspaper to "forget about this topic."

Russia counterpart Alexander Novak also refuted the Interfax report on Wednesday disclosing in a briefing that any output freeze will be "loosely framed," with few constraints on the participating countries, according to Reuters.

Also on Wednesday, OPEC cut its forecasts for global oil demand growth in 2016 warning of potential reductions among customers in China and Latin America. The downward revisions point to signs of a widening gulf in the global supply-demand imbalance, which is already above an estimated 1 million barrels per day. OPEC, the world's largest oil cartel, now anticipates annual world demand growth of 1.20 million bpd this year, a reduction of 50,000 bpd from previous estimates.

At the same time, OPEC said in its latest report that it pumped 32.25 million bpd in March as Saudi Arabia held production steady around 10.2 million bpd. The latest figures provide some optimism that the Saudi kingdom is intent on capping output at this weekend's meeting in order to prop up flagging oil prices. Over the last 16 months, oil prices have tumbled more than 40% since OPEC rattled global energy markets with a strategic decision to maintain its production ceiling above 30 million bpd in an apparent effort to increase its market share.

U.S. production suffered its fifth straight weekly loss, falling by 31,000 bpd to 8.977 million bpd. With the sharp declines, U.S. output dipped below 9.0 million bpd for the first time since October, 2014.

Crude futures nearly turned positive just before the close of trading, before settling slightly lower on the day.

The U.S. Dollar Index, which measures the strength of the greenback versus a basket of six other major currencies, rose by more than 0.80% on Wednesday to an intraday high of 94.82. In afternoon trading, the index was on pace for one of its strongest single sessions in six weeks. On Monday, the index dipped below 94 to hit an eight-month low.

Dollar-denominated commodities such as gold become more expensive for foreign purchasers when the dollar appreciates.

And gas went up ten cents a litre here last night.
Democracy can't work. Mathematicians, peasants, and animals, that's all there is - so democracy, a theory based on the assumption that mathematicians and peasants are equal, can never work. Wisdom is not additive; its maximum is that of the wisest man in a given group. "But a democratic form of government is okay, as long as it doesn't work. Any social organization does well enough if it isn't rigid. The framework doesn't matter as long as there is enough looseness to permit that one man in a multitude to display his genius. Most so-called social scientists seem to think that organization is everything. It is almost nothing - except when it is a straitjacket. It is the incidence of heroes that counts, not the pattern of zeros. - Robert A. Heinlein

I have this feeling that if they don't release something substantive this time thru, the oil market is going to get killed,

People are tired of this he said, she said rubbish, where nothing happens other than blathering on about nothing,

With oil over 40, not sure that they will see the need to do much,
They announce a freeze, that is equivalent to nothing as they are all pumping flat out so they would be freezing at a oversupply level.

Nothing less than actual production cuts is going to do it is my thought,
Sound of Silence