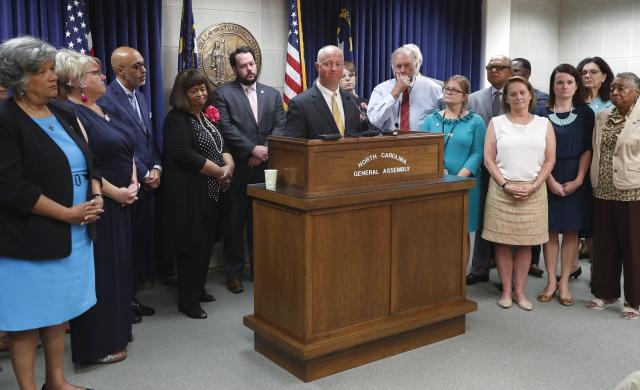 Rep. Darren Jackson, House Democratic Leader, speaks during a news conference with other Democratic House members Wednesday, Sept. 11, 2019. Republicans dominating a nearly half-empty North Carolina House chamber voted on Wednesday to override Democratic Gov. Roy Cooper’s veto of the state’s two-year budget. The unexpected morning vote came without dozens of Democrats on the House floor. Republican leaders tried for months to locate enough votes to meet the threshold for an override, largely through winning over enough Democrats. (Ethan Hyman/The News &amp; Observer via AP)
RALEIGH, N.C. (AP) — Republicans dominating a nearly half-empty North Carolina House chamber used an unexpected vote Wednesday to override Democratic Gov. Roy Cooper's veto of the state's two-year budget, prompting accusations of trickery and deception from Cooper and other Democrats.
Republican leaders had spent months trying to persuade enough Democrats to meet the threshold for an override, and finally seized a moment when most opposing Democrats weren't at their seats. The few Democrats who were on the House floor moments before the 55-9 vote erupted in protest, accusing Republican Speaker Tim Moore of tricking the chamber about the day's plans.
The override isn't complete — the Senate still must hold a vote on the issue, but Republicans there need only one Democrat to join them to secure victory. Senate absences also could make that easier.
"This is a tragedy. This is a travesty of the process and you know it," Rep. Deb Butler, a New Hanover County Democrat, yelled at Moore just before the vote began. "Mr. Speaker, how dare you, Mr. Speaker!"
Moore told her that he "did not advise that there would be no votes this morning." Moore's office provided audio from Tuesday's floor session from House Rules Committee Chairman David Lewis saying recorded votes would occur Wednesday, specifically identifying two different spending measures.
Still, in a fiery early-afternoon news conference, Cooper maintained that Democrats were misled.
"You look at the number of people who were in that chamber and how many of them were Republicans and how many of them were Democrats. There's no confusion about what happened here. This was a lie, and we know why they were not there because they were told that there were not going to be votes," Cooper said. "And the Republican caucus was laying in wait, ready for this."
Cooper accused Republicans of pulling "their most deceptive stunt yet" at a time when many North Carolinians were focused on honoring those killed in the 9/11 attacks, though it wasn't immediately clear how many lawmakers may have been attending memorials.
The House budget override vote has been on the daily floor calendar since early July, and from time to time the Republican leadership had announced that there would be no recorded votes on certain days. There was nothing in the chamber rules to prevent such action Wednesday.
Wednesday's vote also came as lawmakers focus on redrawing legislative maps following a court ruling striking down dozens of districts due to extreme partisan bias.
It also marks the latest battle in a decade-long fight between Republicans who took over the General Assembly in 2011 and Democrats whose party had largely controlled state government for over a century. Democrats have regained some power with Cooper's election in 2016, and ended the GOP supermajority in the House last year by gaining enough legislative seats to prevent veto overrides when the chamber is full.
Cooper vetoed the budget on June 28, saying the two-year spending plan lacks Medicaid expansion for hundreds of thousands of low-income adults, contains paltry raises for teachers and unnecessarily gives corporations additional tax reductions. The veto and lack of an override had led to an 11-week budget impasse. Republicans have said Cooper won't negotiate unless Medicaid expansion is approved, too. Cooper said he just wants the topic to be on the table.
Wednesday's vote was called quickly, giving dozens of Democrats little time to reach the floor. House Minority Leader Darren Jackson of Wake County also said that several Democrats who were on the floor didn't vote and were denied the chance to debate the measure.
Moore "kept talking over us. He turned off our mics," Rep. Mary Belk, a Mecklenburg County Democrat, said at a news conference. She and others went to other desks to use the microphones. As Butler and others continued to blast Moore's actions from the floor, the speaker threatened that he could order Butler removed. Several Capitol police officers entered the chamber, and Democratic lawmakers surrounded Butler, who refused to yield.
"The unseemly lack of leadership is incredible, absolutely cowardice, childishness," Butler said as Moore called for an override vote, on a separate Cooper veto, which also succeeded. That funding measure is needed to prepare for North Carolina's forthcoming shift to a Medicaid managed-care system. It doesn't contain any Medicaid expansion provisions, but Cooper said in his veto message that health care policy should be done comprehensively — a likely reference to expansion.

Anything that makes the Dims squeal makes me happy!
Look up 'The Greatest Story Never Told'- We've been lied to all along!
https://www.impartialtruth.com/adol...tiPSOD_NgC7jycrRJ1GsLfeMHw61x3RfDlqiT_IP81uUg
The truth shall set you free! The worst thing you can do is fear it!
Hellstorm:
https://www.bitchute.com/video/17nypWABfsmu/

yeah, that was definitely a whine
Sound of Silence

Scorpio said:
yeah, that was definitely a whine
Click to expand...
Which brings to mind....whats a jewish(inserrt your description)wifes favorite wine?

But I wanted the keys to the Mercedes!!
1 more..

What's the difference between a Jewish wife and a bowl of jell-o?

Jello shakes when you eat it!!