Djokovic is not a freedom fighter, he’s a global problem - AFR

Djokovic is not a freedom fighter, he’s a global problem​

The global controversy over the Serbian tennis champ reflects rising government impatience with vaccine hold-outs who threaten the world’s ability to handle pandemics.

Novak Djokovic may have lost his battle to stay and defend his Australian Open title, but he’s not the freedom fighter many of his supporters believe.

As governments around the world struggle to guide their nations through a third year of the COVID-19 pandemic, tolerance for anti-vaxxers is waning. The uproar in Australia to news that a Melbourne court, over the objections of the federal government and immigration authorities, cleared the Serbian to enter the country without being vaccinated is not empty bleating. Instead, it’s a sign that he really is among a global minority that’s shrinking by the day as the high-speed spread of the omicron variant energises a new round of vaccinations.

Djokovic may have secured a win when the court quashed the cancellation of his visa. But it’s a Pyrrhic victory in the battle against science and the thousands of researchers developing and rolling out inoculations to protect global populations. The European Union has around 80 per cent of its adults fully immunised. Australia has 92 percent of people 16 years and over fully vaccinated. Even in the US, where a misinformation campaign has deepened partisan divides over the response to COVID-19, more than 79 per cent of the population aged five and older has had at least one dose.

From vaccine and mask mandates at Broadway shows in New York to school closures in Italy, life as we once knew it is in disarray. Leaders who’d hoped that vaccine rollouts would guide their countries back to normalcy are increasingly frustrated with the few who are not only opposed, but continuing to spread misinformation even as they are more likely to die from the disease.

Italian Prime Minister Mario Draghi is among the latest to show his annoyance. With 100,000 new cases and 700 hospitalisations on Monday, the nation is grappling with whether to reopen schools. While his government won a court battle against Italy’s Campania region that had fought to keep them shut, he made clear where he thinks the true trouble lies.

“Most of the problems we have today stem from the fact that there are people who are not vaccinated,” Draghi said. And that’s a distinct minority, with more than 90 per cent of the adult population having had at least one dose by the end of December.
Policies that exist in various countries of excluding those who’ve chosen not to be vaccinated from places like restaurants and public buildings have been labelled vaccine apartheid, a decidedly off-key reference to South Africa’s policy in the mid-20th century of separating people by race. But the difference is stark — individuals have a choice of getting immunised or not. That wasn’t the case for victims of decades of legalised racist oppression.

As solid majorities in wealthier countries become vaccinated, some leaders have tired of persuading the holdouts and grown unapologetic about pressuring them. French President Emmanuel Macron said what many others are likely thinking, that he wants to “piss off” the unvaccinated until they get their shots. And he may not have far to go — 93 per cent of adults in France have received at least one dose.

Much was made of the uproar against such language, and Macron’s vocalisation of disdain for a minority that’s unlikely to vote for him anyway in presidential elections in April. Indeed, criticising them might shore up his support within the vaccinated majority. But his logic, from a public policy perspective, can’t be faulted. “The idea of freedom brandished by some of our fellow citizens to say, ‘I’m free not to get vaccinated’. That stops where you impinge on others’ liberty, where you put others’ lives in danger,” he later said.

All that anyone wants at this point is the freedom to return to something resembling life pre-COVID. The people preventing that from happening are not the vaccine advocates — a group that by now includes even Donald Trump — but those, like Djokovic, who put their own idiosyncratic views before the welfare of those who are less young, healthy and powerful. He’s said he opposes vaccines, but later clarified that he’s open-minded about them while refusing to get inoculated against COVID-19. The 34-year-old has previously stated that positive thoughts could cleanse polluted water, among other claims.

At this moment, roughly one in 44 Australians is infected with COVID-19, one of the highest rates in the world. The fact that the country is now able to ride this out without stringent lockdowns or a devastating wave of deaths is a tribute to the vast majority who have taken their shots to support the health of their fellows and neighbours. This is what a return to normality looks like — and, given the ingenuity of SARS-CoV-2 in generating new variants, it will require continued vigilance around booster shots and modest distancing measures for some time to come.

By chipping away at the public health measures that Australia has used to give itself this outcome, Djokovic has given succour to those who would flout vaccine rules and leave the world less capable of coping with the next variant, and the next pandemic. Liberty for a world No. 1 tennis player that leaves the less fortunate captive to the risks of a fatal infection is no true freedom. 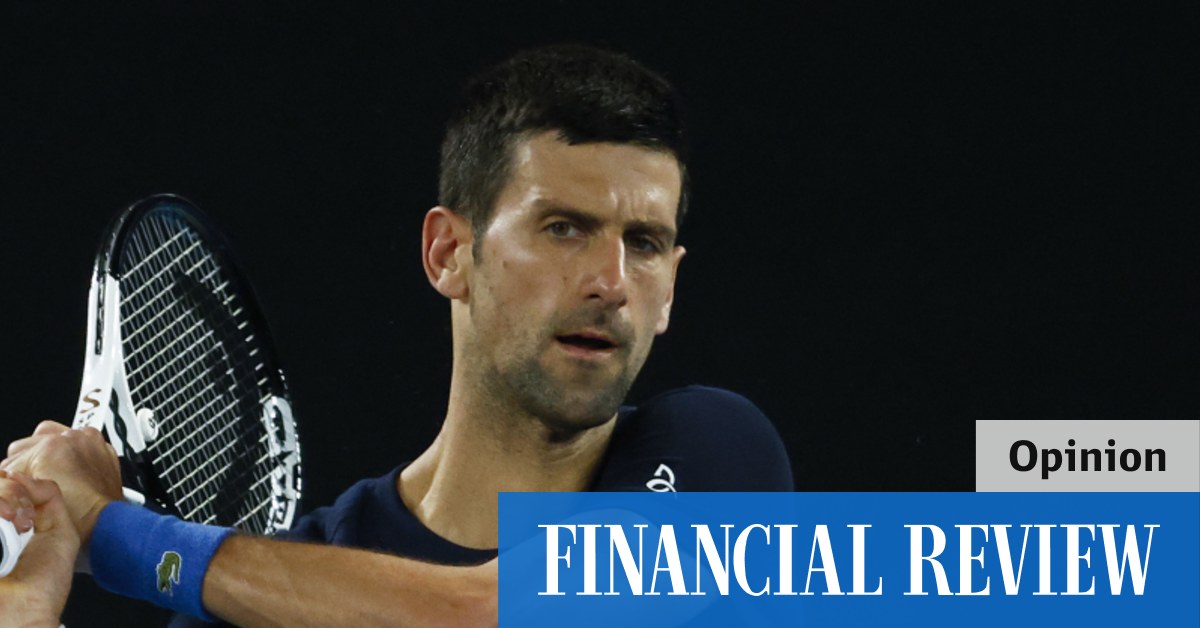 Djokovic is not a freedom fighter, he’s a global problem

The global controversy over the Serbian tennis champ reflects rising government impatience with vaccine hold-outs who threaten the world’s ability to handle pandemics.

www.afr.com
"Circumstance made us become the resistance, we just wanted to be left alone"

Djokovic showed up the Australian govcos as complete arse clowns, and now they are seeking vengeance. Not only are they wanting their pound of flesh for exposing the beer virus scam, they are properly shitty because a "wog" outsmarted them and made them look like first class fools. Anglo Saxon Australia has a rather fucked up history (one that all of the SJW/woke fuckwits conveniently ignore as it doesn't fit their narrative) when it comes to the treatment of the non-Anglo European immigrants that came to the country throughout the 20th century.

The left-leaning media are desperate to keep the narrative going, even in the face of the whole shitshow collapsing all around them.
Last edited: Friday at 3:12 AM
"Circumstance made us become the resistance, we just wanted to be left alone"

Thanks, smells about right.
Sarcasm so advanced people think I'm mentally retarded
Suddenly, we all became Surprise Mormons
The Great Depression will now be known as the Good Old Days.
I'm trying to break my normalcy bias, cognitive dissonance and mental self interest gymnastics in order to think outside the box.​
You must log in or register to reply here.
Share:
Twitter Share Link