Do Canadians Want To Stay In The Oil Business?

Do Canadians Want To Stay In The Oil Business?
David Yager

The Canadian oilpatch is facing unprecedented challenges from uncontrollable forces outside our borders where oil prices and the vast majority of supply and demand are determined.

There are a variety of variables. A light tight oil boom in the U.S. adding production in volumes not so long ago thought of as impossible. The changing behavior of OPEC, particularly Saudi Arabia, from price support to market share. Domestic strife or poor government in oil-rich countries like Iraq, Libya, Venezuela or Nigeria. The end of international sanctions against Iran and a slowing economy in China. Canadian oil managers and workers follow the news, adjust their business as required and roll with the punches to the best of their ability.

However, it is becoming increasingly clear there’s a whack of challenges within this country combining to make a bad situation worse. It begs the question: do Canadians want to be in the oil business at all? No is fine. Free country. But those who want Canada to become something other than it is should understand and acknowledge the enormity of the economic hole abandoning the oil industry will leave and how hard it will be to replace this wealth and opportunity.

Canada is the fifth largest hydrocarbon liquids producing jurisdiction in the world, a fact not widely known outside of the ‘patch. Whatever many think Canada should be, this is what we are. The following chart shows the top ten global producers of crude oil, condensate and natural gas liquids.

While the United States, Saudi Arabia and Russia are clearly the “big dogs,” with production exceeding 10 million barrels per day (mb/d), Canada ranked number five at 4.31 mb/d in June, just behind China (4.5 mb/d) but ahead of Iraq (3.61), United Arab Emirates (3.46), Iran (3.45) and two other countries known to be totally dependent up on oil, Venezuela and Kuwait. These numbers vary as internal conditions change. Iraq’s production is up, at least for now, while Iran’s is likely to rise with export sanctions removed. Output from all producers outside the Middle East is likely to decline at current prices.

Fortunately, when oil prices collapse, Canada has a diversified economy, which helps cushion the shock. But it cannot afford to have this business disappear entirely. The following chart shows what mineral resource extraction (including oil and gas) meant to Canada in 2014 on a GDP basis, the last year of pre-collapse prices. The source of the chart is the website InvestorsFriend.com and it uses data from Statistics Canada. 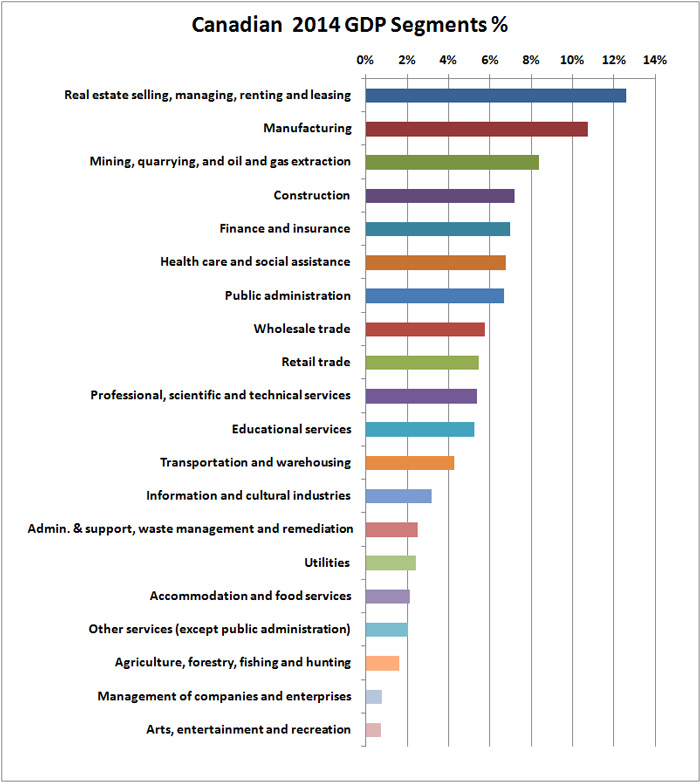 Mining and oil and gas extraction of raw resources ranked number 3 at just over eight percent. But as the Petroleum Services Association of Canada has demonstrated on multiple occasions, the other four of five top sectors (real estate, manufacturing, construction, finance and insurance) do a lot of business supporting resource extraction. Sectors not in the top five already recognized to be hurting because of the oil patch slowdown include transportation and warehousing, professional scientific and technical services, and accommodation and food services.

Canada is learning the hard way, through diminished royalties, shrinking corporate taxes, slashed capital spending, declining payroll remittances and rising government deficits that the collapse in commodity prices – particularly oil – has a serious, negative impact on the economy. As the new Liberal government hints its $10 billion deficit estimate might be low, it is clear that the savings to consumers and industry from lower fuel prices and the stimulus to manufacturing exports from the falling Canadian dollar have not yet replaced the impact of losing nearly $60 billion a year in revenue from oil and gas production. On January 7, Bank of Canada governor Stephen Poloz said the economy would eventually adjust to low oil prices and the low Canadian dollar, but it could take three years.

Regardless, the reaction of multiple Canadian governments to the current economic situation leads to the conclusion that when it comes to oil, certain politicians are naïve, uniformed, or care more about their own popularity than the economic future of the country.

What Alberta’s New Democratic Party government thinks about Alberta’s number one industry is well known. Since Rachel Notley became Premier last May 5 there has been a spate of changes including corporate tax increases, large emitter carbon tax increases, a new carbon policy and a royalty review with an unknown outcome. Notley has called Alberta the “embarrassing cousin” of confederation because of carbon emissions. She and her ministers have spoken enthusiastically about the economic opportunities non-carbon energy will create.

But as job losses mount and royalty revenue to the Alberta treasury declines, the message from Edmonton has evolved from “we have a mandate from voters to make these changes” to “be assured the new royalty regime won’t make things worse.” Edmonton has increased public support for pipelines to the Pacific and Atlantic.

Outside Alberta, things have gone from bad to worse. Early this year the B.C. government reinforced its reticent position on oil pipelines through its province by publicly objecting to Kinder Morgan’s Trans Mountain expansion, despite that pipe having safely oil carried to tidewater for nearly 60 years. B.C.’s five perhaps impossible conditions for Northern Gateway, which helped win the last provincial election, remain unchanged.

But it is the position of new Prime Minister Justin Trudeau during the election campaign and the World Economic Forum in Davos which should and will cause the domestic and international investors serious concern.

Mocking former Prime Minister Stephen Harper’s assertion Canada was an “energy superpower” (the statistical evidence above supports Harper’s position), Trudeau said, “My predecessor wanted you to know Canada for its resources. I want you to know Canada for its resourcefulness.” This caused a National Post columnist to comment January 22 that while this might be a clever message in urban areas like Montreal and the lower mainland, where they can oppose pipelines and not lose their jobs, it was insulting to millions of Canadians who have depended upon raw resource extraction to pay the bills and survive for generations.

Those were only words and the country will survive. But during the election, the Trudeau Liberals promised revisions to the National Energy Board which are now being used by oilsands opponents across the country to delay or influence current or future NEB pipeline hearings. The NEB is being directed to consider the environmental impact of the contents of the pipe and the social impact of its existence and construction.

The National Post reported Trudeau has announced all future pipeline environmental reviews would include GHG emissions of the contents and “…give the various levels of government, scientists and indigenous people the opportunity to speak and take party in the decision making”. Trudeau said, “It’s not just governments which give permits. Communities must also give their approval, give permission”.

Montreal Mayor and former federal Liberal cabinet minister Denis Coderre entered the fray January 21 when, on behalf of 82 municipal leaders, he declared TransCanada’s Energy East a great risk and of little benefit to this part of Quebec and therefore they would oppose it. This started a war or words among Coderre and western political leaders grappling firsthand with the severity of the oil price collapse. This found its way into the House of Commons January 25.

Coderre wrote in the Montreal Gazette January 25, “We will…ask the federal government to amend the law (NEB legislation) to include, in its assessment of this project (Energy East), an environmental impact study that will take into account the production of GHGs at the source.” Trudeau met with Coderre January 26 and agreed with the Montreal Mayor when he announced the NEB policy changes.

On the west coast, B.C. Aboriginal groups pressed the NEB to suspend the current review of Trans Mountain pending NEB policy changes affecting Aboriginal impact and consultation. Lower mainland communities like Burnaby are using the Liberal policy change as another tool to stop Trans Mountain. That Prime Minister Trudeau has publicly said he would ban increased tanker traffic off the west coast has effectively killed Northern Gateway (despite NEB approval) and strengthened the determination of opponents.

The pipeline mess caused Globe and Mail columnist Konrad Yakabuski on January 25 to call pipelines “the kryptonite of Canadian politics,” choosing that description because kryptonite was the only thing that could kill comic book hero Superman. Yakabuski quoted Calgary Mayor Naheed Neshi, who in response to Coderre and Trudeau said Canada “…is a resource economy. Our biggest export is still energy and I do not see a path where that does not continue to be the case, so clearly we need to do what we can on market access.”

Yakabuski wrote, “There is not an honest politician in this country who does not know that to be true. Yet, plenty peddle the illusion to a receptive population that they are accelerating our transition to a fossil-free economy while doing little of substance to encourage the shift. They can’t change the fact that there are no technologies cheap or dependable enough to supplant the internal combustion engine on a mass scale.”

International investors read Canadian news. On January 19, the Financial Post carried a column explaining how China was weary of investing billions in Canada oil with no progress on pipelines. The opening line read, “Canada has lost credibility as an investment destination because of its inability to build export infrastructure…” The article quoted a former CNOOC executive who said, “The federal government (in Canada) is a weak government, not like China, in comparison. Most resources are located only in Alberta…and Alberta is an island state…I don’t see any progress.”

Canada’s struggling oil and gas industry is fighting battles on too many fronts when business is this challenging. Opposing Canada’s number one resource industry is so socially acceptable, so-called “activists” are now physically interfering with the operation of Enbridge Line 9 and, although arrested, don’t expect jail time. Municipal and provincial politicians can impair economic development in other parts of the country by withholding transportation access and be rewarded with more votes. The Prime Minister can tell the world in Davos core Canadian resource industries don’t matter like they once did and not lose popularity.

Meanwhile, none of those opposed to continued oil and gas production and development see any need to explain what the economic alternatives are to the millions of Canadians impacted by their actions and decisions. There is always talk about the great future in renewables but there is no evidence this creates energy, taxes and wealth like hydrocarbons do.

In times like this everyone in the oilpatch is forced to demonstrate exceptional resourcefulness, particularly those who have lost their jobs and will have to find a new source of income unless business conditions improve significantly and soon.

Left is what teevee said is Douglas Channel, right is what it actually is. How long before another Exxon Valdez, and would you support that? Northern Gateway promised 1,000s of jobs then brought in foreign labor. When the pipeline is complete, there will be an estimated 12 jobs that stay.
Alberta since the oil bubble has seen home prices inflate by 300% or more, people earning $200k a year and spending it all on cost of living. Qui bono?
Alberta was fine when oil was $20/bbl and they'll be Okay again.
Last edited: Feb 4, 2016
The meaning of life is to give life meaning.
You must log in or register to reply here.
Share:
Twitter Share Link