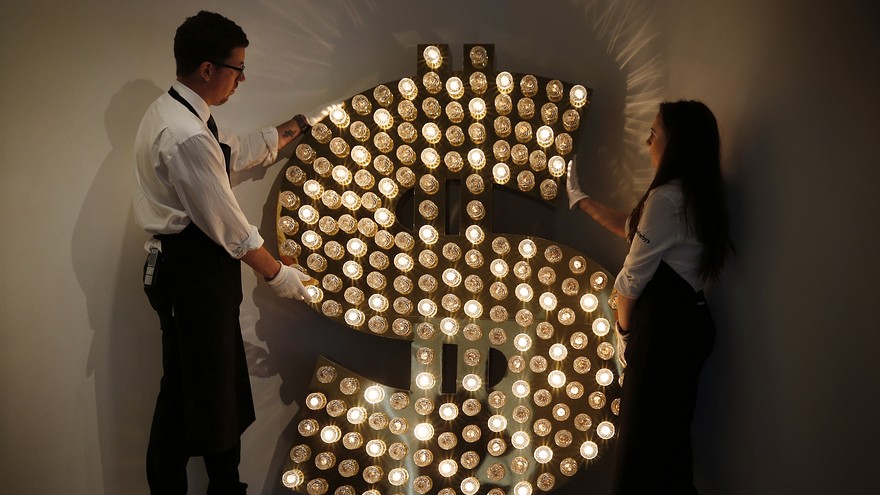 Getty Images
The dollar climbed against most other rival currencies on Thursday as hawkish comments from Federal Reserve members spurred chatter of a rate rise this spring.

The U.S. currency received a boost from a series of upbeat comments by Federal Reserve officials this week that rekindled speculation that the central bank might soon raise short-term interest rates again. On Wednesday, St. Louis Federal Reserve Bank President James Bullard suggested that a rate increase in April remained a possibility.

However, the dollar was unable to test further upside as many investors remained reluctant to make major moves, instead closing out their currency positions ahead of the coming Easter holiday weekend observed by markets in many parts of the world — though not in Japan.


“The dollar remains firm, despite a lack of support from the (Tokyo) stocks,” said Marito Ueda, director at FX Prime byGMO. “But investors find it difficult to move,” he said.

“Although the dollar’s downside bias is felt stronger than previously expected, the dollar is unlikely to fall below ¥110, but finds it very hard to go above ¥113,” said Ueda. “That makes investors wonder what is the next trading cues,” he said.

The pound GBPUSD, +0.0567% continued its march lower, as investors feared the attacks in Brussels this week raises the likelihood the U.K. might vote to leave the European Union, the so-called Brexit. Sterling bought $1.4071, down from $1.4117 late Wednesday in New York.

the dollar will continue to maintain strength as long debts keep rising while demand keeps falling. in a lot of places, tangibles are cheaper to store than to distribute. that's why tankers and truckers just drive around without dropping off their cargo. we are now circling the drain like a fresh brown long about to get sucked into the toilet abyss...how long the circling lasts is anyone's guess.maybe they can drag this out another 200 yrs...lmfao

I never cease to be amazed at how fast, how often and how many line up to drink the koolaid
Orthodox Jedi
Make mine a vodka and vicodin latte.