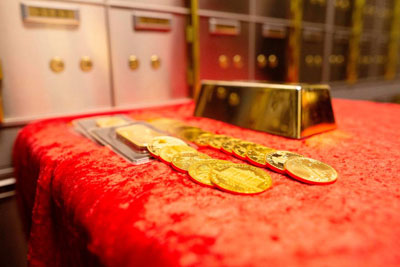 Examples of gold bullion (right) are on show at Merrion vaults in Dublin on January 7, 2019. - In a vault under the streets of Dublin a pot of gold owned by anxious investors is growing every day Britain edges closer to leaving the EU without a deal.


Investors can’t seem to get enough of exchange-traded gold funds.


In September, gold-backed ETFs and similar funds snapped up an extra 75 metric tons of the metal worth almost $4 billion, according to a report published Tuesday by World Gold Council.


The mass inflow brings the total gold held in such ETFs to a record-breaking high of 2,808 tons worldwide worth $134 billion. These funds include the SPDR Gold Shares ETF (GLD), which is the world’s largest and most liquid gold-backed fund, which grabbed 43 tons more bullion during the 30 days.


Despite those inflows the price of the metal suffered over the month. At the beginning of month one troy ounce of the metal would cost you $1,529, but by the end the price had fallen to $1,472, according to Bloomberg data. One ounce of bullion was recently fetching $1,504.


September’s inflow came primarily from investors in North America, where 62 tons of the metal got added. Investors in Europe and Asia purchased eight and four tons, respectively.


The trigger that gave investors some fever was concerns over how central banks, such as the Federal Reserve, might change the cost of borrowing money.

Put simply, central banks lowered borrowing costs, and that made gold more attractive to investors. That’s because lower interest rates for dollar deposits may cause inflation.


"Weak data in the US, Fed easing and further declines in real rates are supportive for gold," states a recent research report from Swiss bank UBS. The less-than-robust data to which it referred was the drop in the ISM manufacturing survey to its lowest level in 10 years.


The ISM survey, which measures the health of the factory sector, showed a second straight month of contraction. In turn that should augur lower borrowing costs.


"The [interest] rates market is now pricing in a higher probability of another rate cut before the year ends, possibly by the end of this month, and our economists similarly raise this potential, the report continues.


In other words, more interest rate cuts are likely coming and that should help boost gold prices. 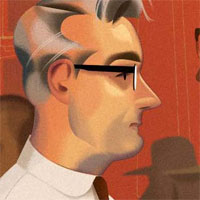 Scorpio said:
Examples of gold bullion (right) are on show at Merrion vaults in Dublin on January 7, 2019. - In a vault under the streets of Dublin a pot of gold owned by anxious investors is growing every day Britain edges closer to leaving the EU without a deal.

if you don't hold it, all you have is the value on the sheet of paper in front of you, and that's exchangeable in fiat, maybe
I grew up an 'outside yard monkey'...and look what I've become...
My Mother IS Proud!

if it's etf's i read they don't settle in physical gold, they settle in cash

maybe i got it all wrong, wouldn't surprise me, but, that's what i recall
these storage facilities don't like to dispense with the real thing and they've been reported to overpay on some contracts to avoid paying out in physical metal

anyone have any experience?
I grew up an 'outside yard monkey'...and look what I've become...
My Mother IS Proud!

Ponce would chime in here: "If you don't hold it, you don't own it."
List of Q Post Acronyms
Pedofile Human Trafficking
Q posts
DEEP STATE MAPPING PROJECT

Ragnarok said:
But is it physical gold, or promises that it will be physical gold?
Click to expand...
The latter...and light in the promises department at that.
"A dollar is a receipt for a claim check on an IOU." - Mike Maloney
"None are more hopelessly enslaved than those who falsely believe they are free." - Johann Wolfgang von Goethe
"It doesn't matter how beautiful your theory is, it doesn't matter how smart you are. If it disagrees with experiment, it's wrong." - Richard Feynman

Location
Peeking out from under the keyboard!

Buck said:
if it's etf's i read they don't settle in physical gold, they settle in cash
Click to expand...
I think it is like SLV, you have to be an authorized participant and you have to deposit or withdraw a 'basket' (shit ton) at a time.
Cheers
Z

The proverbial glass is full, half with water, half with air. Anyone who thinks otherwise does not fully understand the situation. - Z
You must log in or register to reply here.
Share: Twitter Link