That story, mostly unknown until now, should at an absolute minimum require the approval of any employee’s request for conscience-based religious exemptions from employer or government vaccination mandates.

On October 6, with the help of James O’Keefe’s Project Veritas (PV), a whistleblower at Pfizer revealed, in leaked internal emails, that company executives have been, in PV’s words, “telling staff to be secretive about the use of human fetal tissue in laboratory testing of the COVID vaccine.”

The video cites an email from the company’s senior director of worldwide research admitting that “One or more cell lines with an origin that can be traced back to human fetal tissue has been used in laboratory tests associated with the vaccine program.” The firm’s chief scientific officer specifically identifies the cell line involved as “HEK293T cells … (which) are ultimately derived from an aborted fetus.”

Pfizer’s resistance to disclosing the roots of its vaccine’s origins seems inexplicable for at least three reasons.

First, In December, the Catholic Church’s Congregation for the Doctrine of the Faith, in light of the degree of perceived emergency presented by the COVID-19 pandemic, indicated that “it is morally acceptable to receive Covid-19 vaccines that have used cell lines from aborted fetuses in their research and production process.” In non-emergency circumstances, such an action would be considered mortally sinful “cooperation in evil,” but the Congregation indicated that Pope Francis “examined” their work and “ordered its publication.”

Second, human fetal tissue research, though controversial (as just noted), has been conducted since the 1930s, and is said to have “helped to develop vaccines for a wide range of diseases, including polio, measles, mumps, rubella, hepatitis A and B, shingles and rabies.”

Third, HEK293, the cell line Pfizer cited, has existed for nearly a half-century, and has been widely used. To cite just one of many examples, HEK293 cells are credited with “many of the antipsychotic drugs used to treat mental illnesses like schizophrenia and bipolar disorder.”

One would think that these three factors, especially the Pontiff’s de facto blessing, would have caused Pfizer to promote, or at least strongly defend, its use of the HEK293 cell line as another shining example of scientific advancement resulting from human fetal tissue research.

The details of HEK293’s brutal – and from all appearances, until very recently, largely undisclosed – origins explain the company’s deep discomfort. Contrary to nearly a half-century of misrepresentation and obfuscation, HEK293’s creation did NOT arise from an “abortion” as everyday people understand it.

A very recent development serves to confirm this.

In August, the University of Pittsburgh effectively made a horrifying admission. The Center for Medical Progress, which had to enlist the help of Judicial Watch before the university would respond to its Freedom of Information Act request, explained that the school’s GUDMAP program (full name: GenitoUrinary Development Molecular Anatomy Project), with the help of area Planned Parenthood abortion providers, was “allowing babies, some of the age of viability, to be delivered alive, and then killing them by cutting their kidneys out.”

Everyone reading this article should surely agree that once a baby is delivered alive, killing it should no longer be considered an abortion. Killing a delivered-alive baby is textbook infanticide.

Pitt’s researchers and Planned Parenthood had to resort to this gruesome butchery because it is the best and likely the only way to harvest certain usable body parts, particularly kidneys. Harvesting viable kidneys requires continuous blood flow, which in turn requires a beating heart, which in turn requires that the baby be alive (or at the very least almost always) outside the womb when the kidneys are removed.

The HEK293 line was created in the early 1970s. Months before the University of Pittsburgh’s admissions, AnnaMaria Cardinalli, an extraordinarily perceptive and conscientious writer, detailed the damning truth about its origins at Crisis Magazine in January:

… To harvest a viable embryonic kidney … sufficiently healthy children old enough to have adequately-developed kidneys must be removed from the womb, alive, typically by cesarean section, and have their kidneys cut out. This must take place without anesthesia for the child, which would lessen the viability of the organs.

… The deliberate killing of an unwanted child (a little girl, in the case of HEK 293) took place in the tortuous manner it did precisely to obtain her organs for research. The harvest of her organs was the direct cause of her death, prior to which, she was a living child, outside the womb.

In email correspondence, Ms. Cardinalli indicated, based on her own discussions with medical experts and “the test of reason,” that in her view, “we are genuinely speaking of clear infanticide, not abortion.” In her article, she also indicated that she fears that “Pope Francis and Pope Emeritus Benedict may not have had this information when they received the vaccines.”

In the decades since HEK293’s creation, its two most directly involved scientists, Drs. Alex van der Eb and Franklin Graham, have been vague in explaining the cell line’s origins.

As seen in a draft transcript from a 2006 FDA conference (on Page 81), Dr. van der Eb claims that “The kidney of the fetus was obtained in 1972, probably. The precise data is not known anymore. The fetus, as far as I can remember, was completely normal. Nothing was wrong. The reasons for the abortion were unknown to me. I probably knew it at the time, but it got lost, all this information.”

Graham says that “the exact origin of the HEK293 fetal cells is unclear. They could have come from either a spontaneous miscarriage or an elective abortion.”

Cardinalli, who was not aware of Graham’s possible “miscarriage” speculation when she wrote her article, asserted that “There is no way that a spontaneous abortion could result in the cell line (as the kidneys cannot remain viable past the brief window in which they must be harvested).” It’s quite revealing that Dr. Graham speculated about something which seems so clearly impossible.

Regardless of whether either scientist’s memory improves, it’s hard to imagine how they would be able to describe their work as anything other than what Cardinalli described, and what the University of Pittsburgh’s statement confirmed.

They are, of course, welcome to try.

In the meantime, it’s indefensible that an employer or government entity should attempt to force individuals to get jabbed or lose their jobs or forfeit other privileges based on a vaccine whose development originated in infanticide. That story, mostly unknown until now, should at an absolute minimum require the approval of any employee’s request for conscience-based religious exemptions from employer or government vaccination mandates. On October 6, with the help of James O’Keefe’s Project Veritas (PV), a whistleblower at...

www.thegatewaypundit.com
Disclaimer: this post and the subject matter and contents thereof - text, media, or otherwise - do not necessarily reflect the views of the GIM2 administration.

Well, What would you expect from Rat Bastards. All they want is the money, money, money. and they are free of law suits over anything "vaccine" related aka "Jab Juice".
PANDORA'S NOW FAUCI'S BOX . THE MYTH IS NOW REALITY. gb
"FAUCI - MENGELE 2.0." gb
"The ultimate rebellion one can commit is to take any .gov's fiat and convert it to Gold and Silver". gb

The response to this from TPTB is to release a questionarre to any individual seeking a religious exemption that if they have ever used any other medications that uses aborted fetus cells and it includes a VERY long list...

The questionarre in of itself is proof in my eyes that you have no freedom of religion anymore as if the state views your views as ridiculous they will not grant you an exemption. Goodluck in the Courts that are also corrupted with the same cancer.
"Laws that forbid the carrying of arms, disarm only those who are neither inclined, nor determined to commit crimes. Such laws make things worse for the assaulted and better for the assailants. They serve rather to encourage than to prevent homicides, for an unarmed man may be attacked with greater confidence than an armed man." - Thomas Jefferson, 1764

don't look for help from the catholic church. The Pope is behind this agenda. Fetal cells and all.
Those who would give up essential Liberty, to purchase a little temporary Safety, deserve neither Liberty nor Safety.
Benjamin Franklin : 1759

Silvergun said:
Goodluck in the Courts that are also corrupted with the same cancer.
Click to expand...

Far worse than you can imagine - been there done that !!! They lie, cheat, steal & rule against you.
Lost in Orygun.

TheVatican is the "religious" sector of the unholy trinity. They're very much in the NWO endgame and will be pushing all other religions towrads a One World Religion where State and Religion is combined. One World Government and One World Religion all in One.
"Laws that forbid the carrying of arms, disarm only those who are neither inclined, nor determined to commit crimes. Such laws make things worse for the assaulted and better for the assailants. They serve rather to encourage than to prevent homicides, for an unarmed man may be attacked with greater confidence than an armed man." - Thomas Jefferson, 1764

Avalon, I strongly recommend you to pick up this book. I am not attacking your faith just trying to potentially help shed some light on understanding why certain things are happening and how they originated.

The Two Babylons: Or, the Papal Worship... book by Alexander Hislop

It goes in depth on exposing what the Catholic Church really is and is one of the best books ive ever read on the subject and how Christianity, tradition and dogma is where it is to this day. I know lots of good people who are Catholics and I have no issues with them. People are a product of how they are raised to a certain degree. Reading this book will make things "click" on why the Pope does some real head scratchers for those that are practicing the "Catholic version of Christianity", which is from Babylon.
"Laws that forbid the carrying of arms, disarm only those who are neither inclined, nor determined to commit crimes. Such laws make things worse for the assaulted and better for the assailants. They serve rather to encourage than to prevent homicides, for an unarmed man may be attacked with greater confidence than an armed man." - Thomas Jefferson, 1764

This book is availiable online for free at Archive.org 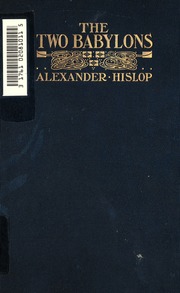 The two Babylons, or, The papal worship proved to be the worship of Nimrod and his wife : with sixty-one woodcut illustrations from Nineveh, Babylon, Egypt, Pompeii, &c : Hislop, Alexander : Free Download, Borrow, and Streaming : Internet Archive

These people who okay the infanticide for the purpose of obtaining fetal cells to put in a not a vaccine to poison people for profit....if they were murdered....would it be murder? Would it be adulticide?