I almost posted this in the daily joke thread, then I thought about the political forum but it just made more sense here. However, I still find it quite funny! 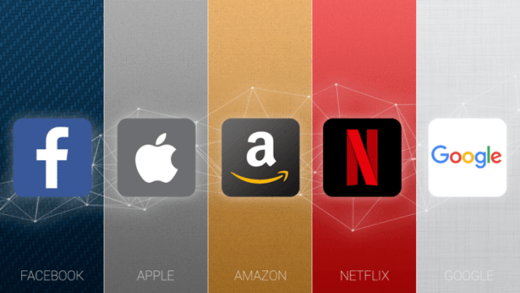 The five "FAANG" stocks collectively lost more than $1 trillion in market value from recent highs on an intraday basis Tuesday.

Combined market capitalization losses since their 52-week highs hit $1.02 trillion on Tuesday:
The five tech growth stocks, which were the favorite investments for the past decade, each closed in a bear market on Monday. Wall Street defines a bear market as a fall of 20 percent or more from a stock's 52-week high.

Goldman Sachs slashed its Apple price target on Tuesday. The firm said in a note there is a "weakness in demand for Apple's products in China and other emerging markets," as well as a disappointing reception for the iPhone XR model.

Facebook shares have slid 40 percent from their highs. A bevy of negative publicity has come since this summer, especially focused on top Facebook executives' handling of foreign influence on the 2016 U.S. election.

Amazon shares continue a fall begun when it gave a fourth-quarter outlook on Oct. 25 that was much lower than expected. Netflix and Alphabet shares, meanwhile, have largely fallen in lockstep with the rest of the FAANG stocks.

nickndfl said:
When the talking heads were pumping them I had a feeling it would be a good time to sell. Might be a good time to nibble at them now.
Click to expand...
The only one I’d buy would be Amazon. The rest have a bit more adjusting to do.

Even Amazon needs to worry since even though they don’t have a monopoly in any single industry their influence in connected and tangential connected industries gives them monopolistic powers from which a court case will spring and possibly a need to shed parts to avoid a consent decree or a forced break up.
"No man's life, liberty or property are safe while the legislature is in session." -- New York State Surrogate Court Judge Gideon John Tucker, Final Accounting in the Estate of A.B._, 1, Tucker (N.Y. Surrogate Court) 247, 249 (1866)

All are long term buys.

Still can’t believe I was smart enough to buy 1000 shares of AMZN in 2001 for almost nothing.
"Bear Island knows no King but the King in the North whose name is Stark"

Mr Paradise said:
Still can’t believe I was smart enough to buy 1000 shares of AMZN in 2001 for almost nothing.
Click to expand...
Nicely done!

Some pictures to see. I'm not the best at charting support lines.

These were 10 yrs out. Google for some reason didn't go 10 years. FWIW

APPLE LEADERSHIP IS ALL-IN ON THE GENOCIDE AGENDA

Apple CEO Tim Cook advocated for censorship of “those who push hate [and] division” across his company’s digital platforms during an Anti-Defamation League (ADL) event on Monday in New York City, NY.

Cook was awarded the ADL’s first “Courage Against Hate Award” at the ADL’s “Never Is Now Summit on Anti-Semitism and Hate.” The ADL described Apple’s top executive as a “courageous and visionary leader” who is “dedicated to fighting hate” and “racist vitriol.”
You must log in or register to reply here.
Share: Twitter Link