What's going on at the Federal Reserve? On Tuesday, Janet Yellen comes out and announces that despite inflation being on the rise and employment below 5%, she is not going to raise the Fed Funds rate 4 times this year, nor even two times this year, but rather most likely none. Of course, this “one and done” scenario is what I suggested back in December following the first rate hike given the ongoing deterioration in the underlying economic backdrop.

However, on Wednesday, Chicago Federal Reserve President Charles Evans comes out and suggests he would support another interest rate increase in June.

So what is it? Are we “data dependent” or are we more concerned about “global economic weakness?” Or, is this just part of the Fed’s careful orchestration to support asset markets?

I think it may just be the latter as the Fed comes to the realization they have gotten themselves caught in a “liquidity trap.” Here is their dilemma? 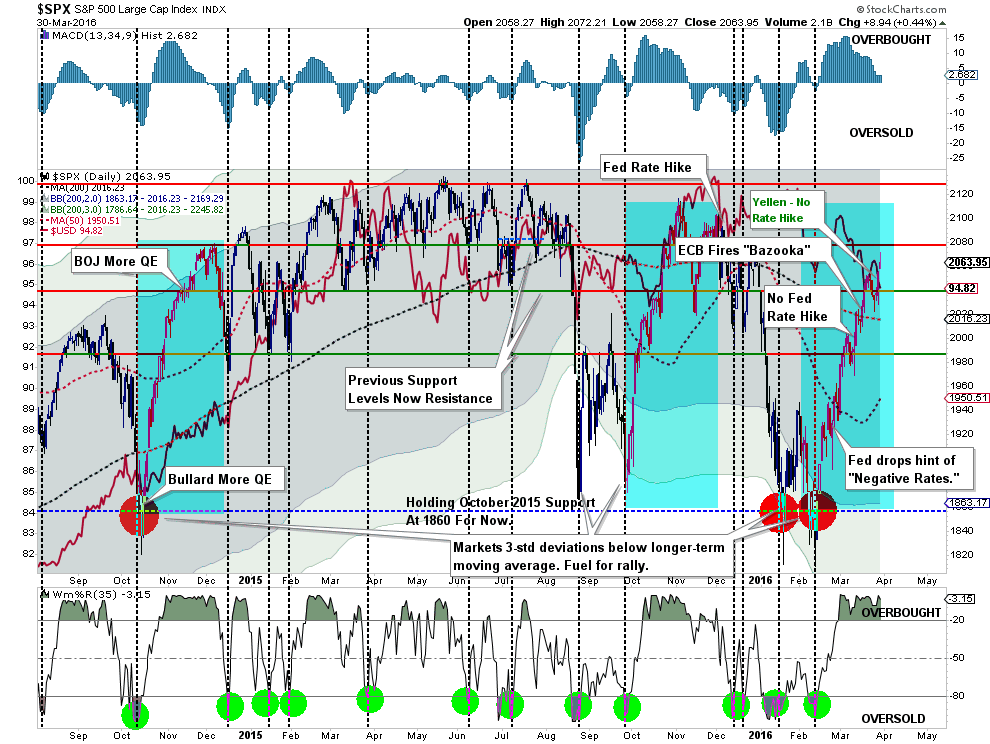 Like the “little Dutch boy,” the Fed currently has a finger stuck in every hole of the dike. The only question is how long is it before the Federal Reserve runs out of “fingers” to plug the next leak?

Employment Not All That It Seems
A couple of weeks ago, I hosted a presentation for a packed ballroom discussing the outlook for the markets and economy over the rest of the year. (I will be posting the video next week.)

Since all eyes are on the employment report tomorrow, I thought I would share with you two slides from that presentation on the real state of employment in the U.S.

For example, take a look at the first slide below. 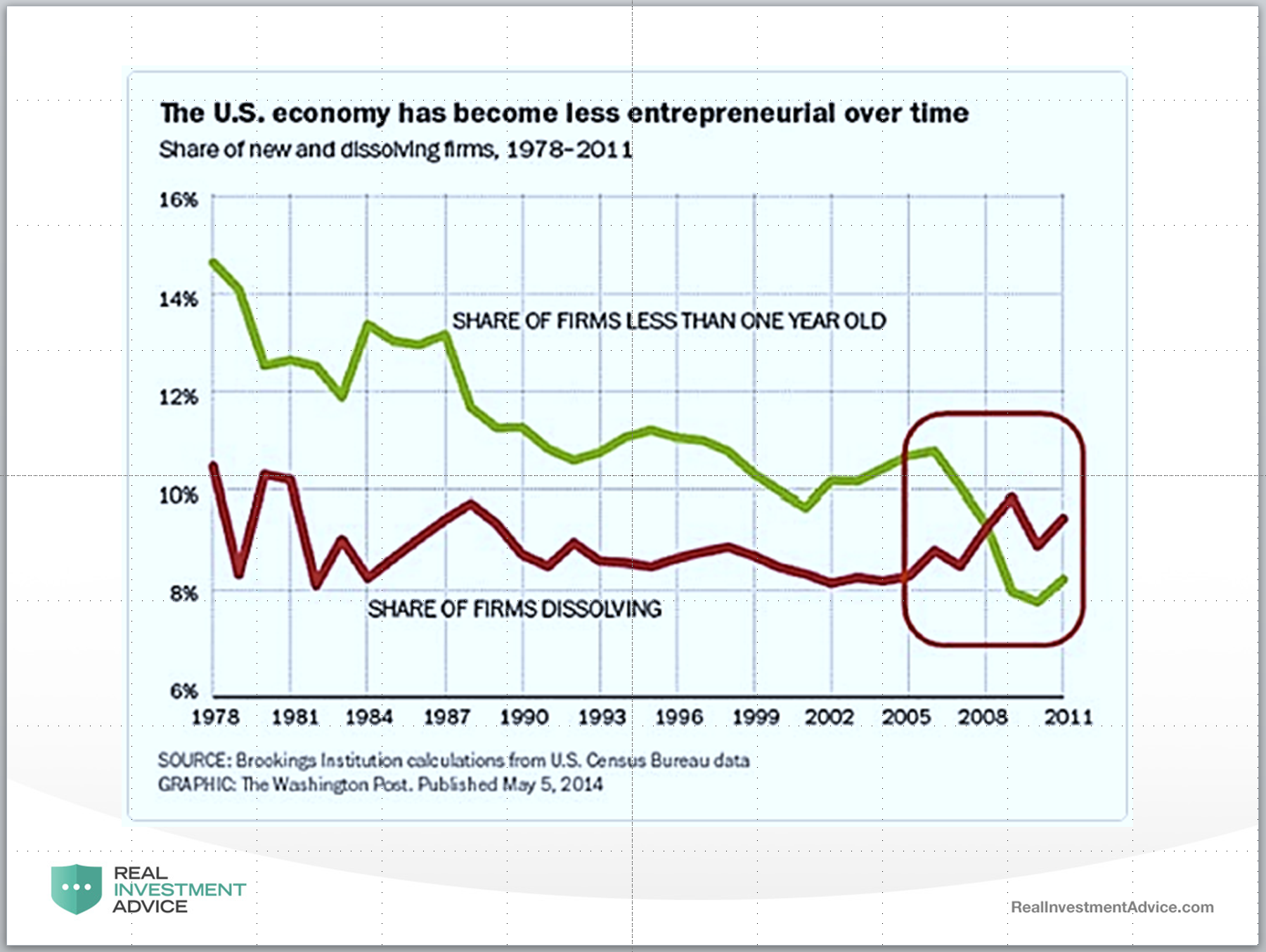 Businesses Come And Go
This chart CLEARLY shows that the number of “Births and Deaths” of businesses since the financial crisis have been on the decline. Yet, each month, when the market gets the jobs report, we see roughly 200k plus jobs created as shown in the chart below. 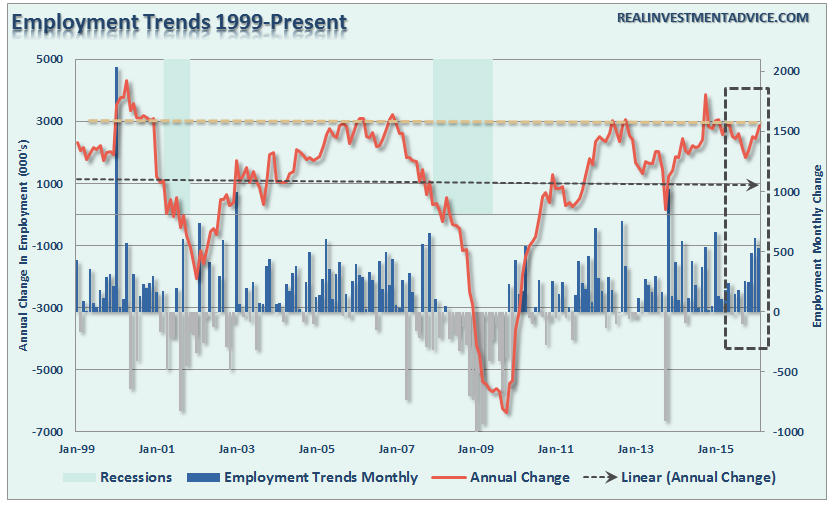 US Employment Trends
Included in those reports is an “ADJUSTMENT” by the BEA to account for the number of new businesses (jobs) that were “birthed” (created) during the reporting period. This number has generally “added” jobs to the employment report each month.

The chart below shows the differential in employment gains since 2009 when removing the additions to the monthly employment number though the “Birth/Death” adjustment. Real employment gains would be roughly 4.43 million less if you actually accounted for the LOSS in jobs discussed in the first chart above. 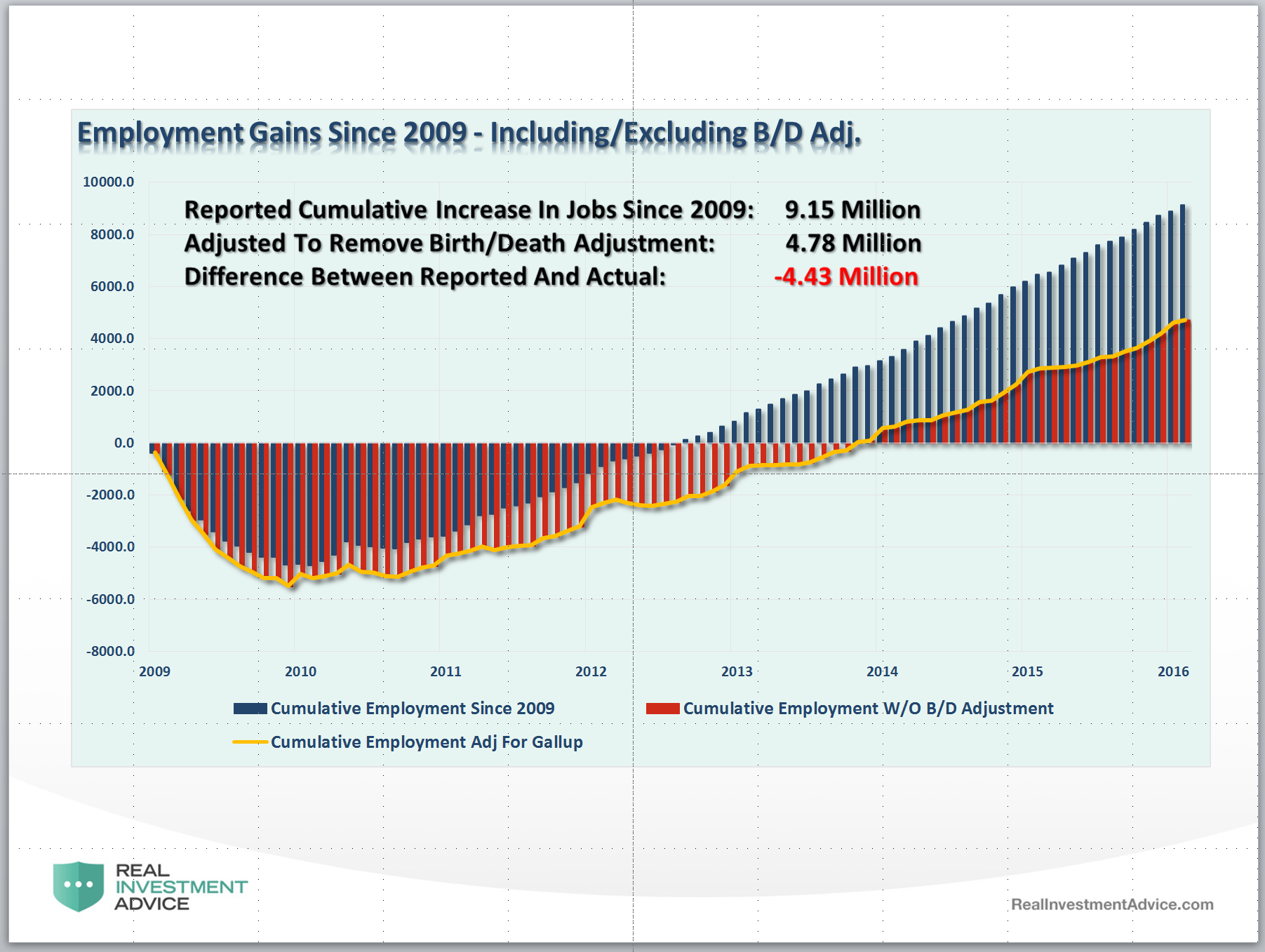 US Employment Gains
The chart above assumes that ZERO jobs were created through the start of new businesses since 2009. However, as both Gallup and the data above show, we have been LOSING roughly 70,000 jobs a year due to “deaths” outnumbering “births” making the numbers above even worse.

Think about it this way. IF we were truly experiencing the strongest streak of employment growth since the 1990’s, should we not be witnessing:

None of those things exist currently.

The issue lies with the “seasonal adjustment” factors, which run through the entirety of economic data published by the various government agencies. Many of these seasonal adjustments have been skewed since the financial crisis due to the economic ramifications following the crash. Furthermore, due to El Nino and La Nina, winter weather patterns have swung from extremely warm (2012 and 2015) to extremely cold (2013 and 2014), which have wrecked havoc with reporting.

All of these seasonal adjustment factors have led to an overstating of headline economic data. Unfortunately, when digging below the surface, the truth is ultimately revealed.

Is it intentional? Probably Not. Is it relevant? Absolutely.

The Savings Rate Conundrum
Interesting take from Tom McClellan on the savings rate:

“When money market funds were created in the mid-1970s, Americans were suddenly confronted with the opportunity to earn a more appropriate reward for deferring their compensation, and for instead saving their money. But curiously, Americans did not do as B.F. Skinner would have suggested they would do. They did not increase their savings behavior in response to the greater reward for doing so. Instead, they started a long downward trend in the savings rate, saving less and less of their income even though they could earn more in real terms for doing so. And that downward trend in the savings rate just happened to coincide with a secular bull market for stock prices.

But since 2005 we are seeing the monthly savings rate data show an upward trend. This change in behavior makes complete sense. Baby Boomers are facing imminent retirement, and thus they are mounting a last-minute campaign to save up enough to live off of without eating cat food, or turning to their formerly helicoptered children for support. At the same time, the “Millennials” or “Echo-Boomers” are just now moving out of their parents’ basements, and have not yet become a major economic force. So the Echo-Boomers are not yet making up in consumption for what their parents are saving.”

S&P 500 And Personal Savings
“One problem is that episodes of this behavior of people saving more tend to be associated with negative growth rate periods for stock prices. That’s a bummer for stock market bulls. So what you should do as a prudent bullish rat is to save your own food pellets while simultaneously encouraging your neighbors to eat all of theirs, and thus make the stock market indices rise. Good luck with that plan.”

Tom is correct in his assessment about what is currently happening with savings. However, he missed one very important component about what happened in the 80s-90s as savings fell – the rise in consumer leverage.

Savings rates didn’t fall just because consumers decided to just spend more. If that was the case economic growth rates would have been rising on a year-over-year basis. The reality, is that beginning in the 1980s, as the economy shifted from a manufacturing to service-based economy, productivity surged which put downward pressure on wage and economic growth rates. Consumers were forced to levered up their household balance sheet to support their standard of living. In turn, higher levels of debt-service ate into their savings rate.

The problem today is not that people are not “saving more money,” they are just spending less as weak wage growth, an inability to access additional leverage, and a need to maintain debt service restricts spending. For Millennials, yes, they may be emerging from their parent's basements, but they are also tasked with trying to pay-off student loan debt with a low, wage-paying service job. 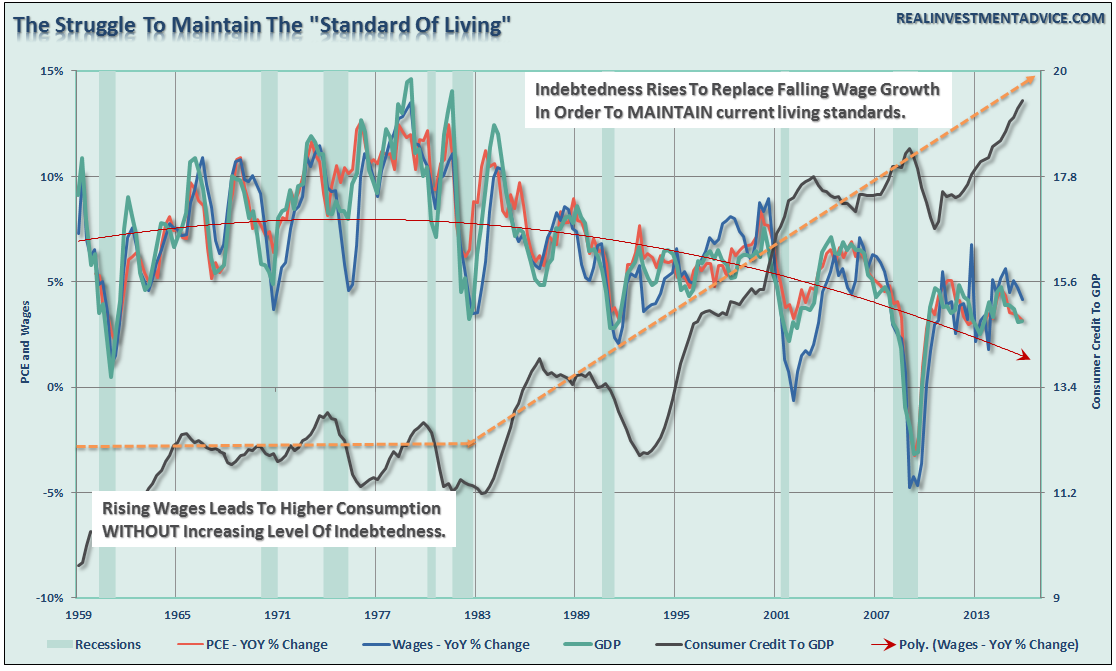 US Debt And Wages
It is indeed a “new economy.”

Only problem is as good as they say things are they are 3x worse, they keep fudging the numbers to prop the markets, the world is on a fault line ready to snap.
You must log in or register to reply here.
Share:
Twitter Share Link