For Retirees Seeking an Inflation Hedge, Here’s How to Add Gold 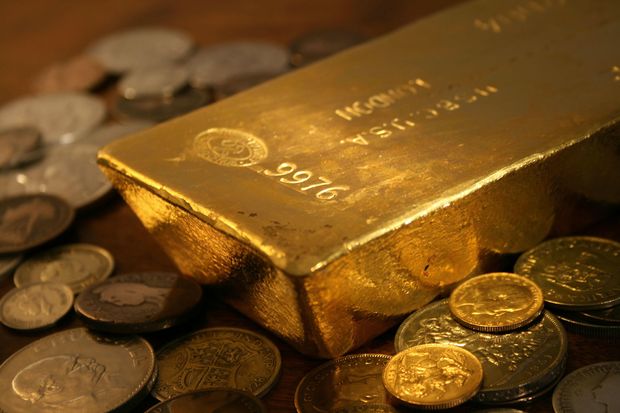 Gold has again excelled in its role as a safe haven and portfolio diversifier, with the precious metal near 7½-year highs after rallying around 10% since early March while stocks tumbled during the coronavirus-driven market tumult.
Looking ahead, gold figures to play a starring role as a store of value as investor expectations on future inflation climb amid global stimulus efforts that have put a flood of cash into the financial system. For retirees on a fixed income, inflation can be a killer especially as interest rates remain low.
But how much should retirees allocate to gold and how to include in a portfolio?
How Much
Kristina Hooper, chief global market strategist at Invesco, says gold is appropriate in anyone’s portfolio as part of the alternatives allocation since the metal can offer portfolio diversification and be an inflation hedge over the long run. And though gold pays no dividends, with interest rates near zero, you’re not giving up much yield by forgoing another safe investment like Treasury bonds.


Depending on the person’s risk tolerance, gold can take up a 5% or less portfolio allocation, she says. For retirees, she adds, “I would expect a slightly lower allocation to gold given they typically need to derive more income from their portfolios.”

And she suggests retirees can further diversify their inflation-hedging assets with Treasury Inflation-Protected Securities and dividend-paying stocks “in order to have assets that provide income but also have historically offered a hedge on inflation.”
Frank Holmes, CEO of U.S. Global Investors, which issues precious metals mutual funds and exchange-traded funds, says gold becomes a true store of value when the inflation rate starts to outpace interest rates. In gold markets, investors look at “real” interest rates, subtracting the benchmark rate from the inflation rate. If that rate turns negative, as it has recently, gold shines.

Negative inflation-adjusted interest rates were behind gold’s last run between 2008 and 2011, when gold hit a nominal all-time high of just over $1,900 an ounce. Gold started to retreat when those “real” rates turned positive, he says. With benchmark rates near zero, this could work in gold’s favor again. He recommends gold holdings up to 10%.

How to Invest
Hooper recommends owning gold directly. There are several bullion-based exchange-traded funds that give retirees exposure to the gold price, or they can own physical gold using a self-directed individual retirement account. However, Hooper points out ETFs are more liquid than physical bullion.
Holmes divides his gold allocation to 5% physical, whether through bullion or ETFs, and 5% to gold-mining companies. Because of heightened demand for physical gold recently, dealers were selling at higher-than-usual premiums because of a temporary shortage. When that happens, Holmes recommends buying bullion-based ETFs.
Holmes is selective in his equities, preferring gold-royalty companies, firms that fund other miners for a cut of the profits, essentially pre-paying for mine production over the life of the mine. Franco-Nevada (ticker: FNV) and Wheaton Precious Metals (WPM) are two examples.
Retirees should rebalance their gold holdings annually to maintain their target balance and dollar-cost average into the positions, they say.

Nothing new there. The real news is Barron's giving up space for an article about a ancient relic. Maybe addressed to the Millennial generation. aka News for the Rookies.
WHICH IS DEADLIER: COVID19 or BIDEN2020 ?

"The ultimate rebellion one can commit is to take any .gov's fiat and convert it to Gold and Silver". gb

"DONALD J. TRUMP a President without a Party but a Nation Has His Back". - Gb
You must log in or register to reply here.
Share: Twitter Link