Let’s take a look at the price of Gold in South African Rands (ZAR) over the last 30 years, and the returns a saver would have earned had they bought and held Gold over various time periods since then: 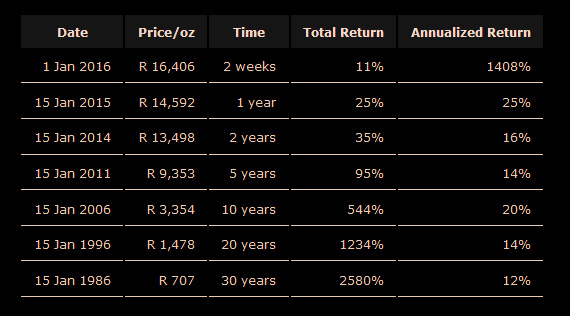 You will be hard pressed to find an equity fund in South Africa that outperformed Gold over the last 10 years.

Even though Gold performed so remarkably well, the financial services industry and mainstream media still has an overwhelmingly negative opinion about Gold.

If you are wondering why none of those extremely intelligent and well educated financial people are talking about these admittedly uncomfortable facts… well… I’m wondering too.

Gold as an inflation hedge

Throughout the ages, Gold has consistently been a safe haven preserver of wealth for people who had to live through times where inflation eroded the purchasing power of the fiat currencies they used for their day-to-day business.

If you stored your wealth in Gold while living through the hyperinflation of the German Mark in the Weimar Republic during the early 1920s, you would have been largely protected from having your wealth eroded away. The same is true for the many people who experienced very high or hyper-inflationary debasements of their fiat currencies more recently: the people of Argentina, Zimbabwe, Venezuela and the Ukraine know all too well what I’m talking about.

South Africans who chose to store their wealth in Gold were also protected from the inflation that plagued the South African Rand since, well… since its inception.

Over the last 10 years Gold did an even better job of protecting people against the loss of purchasing power of the Rand than did the vast majority of equity funds, retirement annuities and pension funds.

Owning Gold is one of the best forms of insurance you can have against being the victim of the theft of inflation.

If you live in any country like South Africa, where there is a high possibility of continued weakening of the local currency, it certainly is a good idea to store a sizeable part of your wealth in Gold.

One of my readers brought my attention to this article. This goes to show how gold is an excellent hedge against falling currencies. While this is not taking place in the United States… it’s just a matter of time before it does.