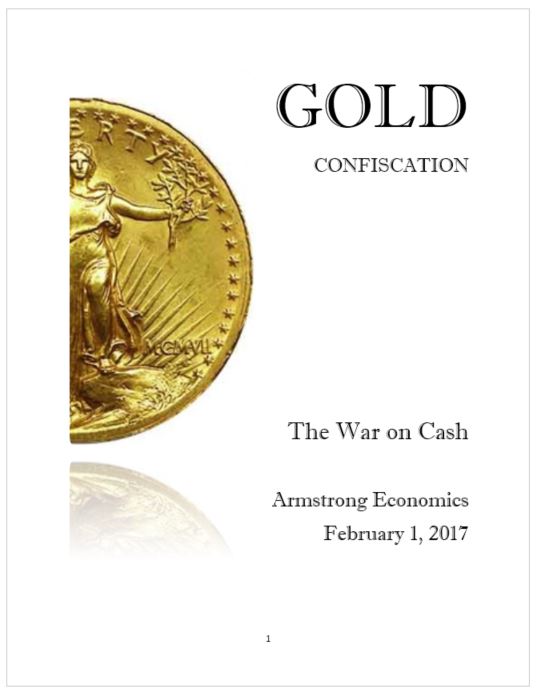 The assault on gold is by no means casual. The hunt for money and the global effort to eliminate cash to be able to increase taxation is also targeting gold. All the sales pitches that gold will survive have ignored the fact that government is well aware of gold and people using it to store wealth. China has imposed gold import restrictions, and India’s demonetization and gold confiscations have provided a blueprint for other governments to follow, and the success to them is that there have not been riots and bloodshed in the streets of India like has unfolded in Venezuela.

Now the European Commission has also proposed tightening controls on cash and have included precious metals transfers from outside the EU. They are using terrorism as the excuse that they need to shut down that route of funding of militant attacks on the continent. It was Winston Churchill who said – “Never let a good crisis go to waste.”Indeed, our politicians in Europe remember those words and they are not allowing any terrorist attack in Europe go to waste. The USA followed this advice with 911, which they took part in, creating TSA, Homeland Security, and began seizing everyone’s phone calls as in the book 1984. The EU politicians are not letting any terrorist attack go to waste and see each event as an opportunity to do things they could not do before to expand their power. Gold is rapidly becoming the target of confiscation in Europe following the Berlin Christmas attack.

Reuters reported that after the attack on a Christmas market in Berlin, where 12 people were killed as a truck plunged into a crowd, was such an opportunity that could not go to waste so the European Commission proposed to tighten capital controls – specifically cash and precious metals – into and out of Europe.

Under the new European proposals, customs officials in European Union will now expand checks on cash, precious metals, and even prepaid payment cards sent by mail or in freight shipments. The hut for money is rapidly expanding. Agents will now be able to seize cash or precious metals carried by individuals entering the EU even below the €10,000 euros threshold. Cash has already been required to be declared at customs when entering the EU and in the USA it is $10,000. The new European rules would allow authorities to seize money below that threshold “where there are suspicions of criminal activity.”

A friend in Germany tried to send €200 as a gift to their father and the government demanded they prove where the money came from. EU officials are claiming recent attacks in Europe were carried out with limited funds. Indeed, are we talking about buying food while hijacking a truck, which cost nothing?

The plan included virtual currencies such as bitcoin, and prepaid cards, which French authorities said were used to fund the bombings. Under this new proposal, even holders of prepaid cards would have to show some form of identity when they make payments of €150 euros or more. The question becomes why include precious metals? You cannot pay for a room with gold coins or but food. You have to convert that to cash and when you do all sales or purchases are already reported.

This is the covert hunt for money. We will be providing a detailed report on additional issues that are arising which will significantly impact your investment strategy moving forward. Will all these restrictions send even more money fleeing to the United States?

We will Announce when this report is ready for 2017

https://www.armstrongeconomics.com/markets-by-sector/precious-metals/gold/confiscating-gold-3/
Disclaimer: this post and the subject matter and contents thereof - text, media, or otherwise - do not necessarily reflect the views of the GIM2 administration.

We're happy to keep robbing you with our fiat scheme and won't be tolerating any of you lot squirming out from under our thumb
I self-identify as vaccinated, and isn't THAT really all that matters?!