Gold prices were slammed down during early to mid-morning trading in Asia on Aug. 9 due to growing currency chaos resulting from the unrest over North Korea's potential for a viable nuclear ICBM. However, this decline in price not only recovered over the next 12 hours, but it in fact rose over $20 to settle around $1272 by the start of morning trading in New York. 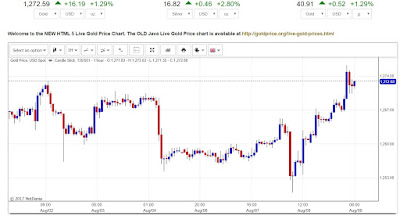 In the meantime silver was not affected by gold's volatility overnight and has seen a steady climb up of nearly 3% to just under $17 per ounce.

As geo-political events continue to simmer in regards to North Korea, a potential trade war with China, and ongoing economic warfare against Russia, gold and silver should continue to move higher, and could soon break key resistance levels of $1300 for gold, and $17.50 for the white metal.

Silver is truly a gift at this price

southfork said:
Silver is truly a gift at this price
Click to expand...
Silver at three dollars and change was the real gift back 15 years ago. I constantly kick myself for not buying more of it. I remember seeing silver rounds out on garage sale tables, out in the open, and griping that $4 and $5 was a rip off.
"No man's life, liberty or property are safe while the legislature is in session." -- New York State Surrogate Court Judge Gideon John Tucker, Final Accounting in the Estate of A.B._, 1, Tucker (N.Y. Surrogate Court) 247, 249 (1866)

In 20 years whoever among us is still alive, we will talk about how Bitcoin was $3000 and gold was < $1300 and how stupid were so many people.
You must log in or register to reply here.
Share: Twitter Link