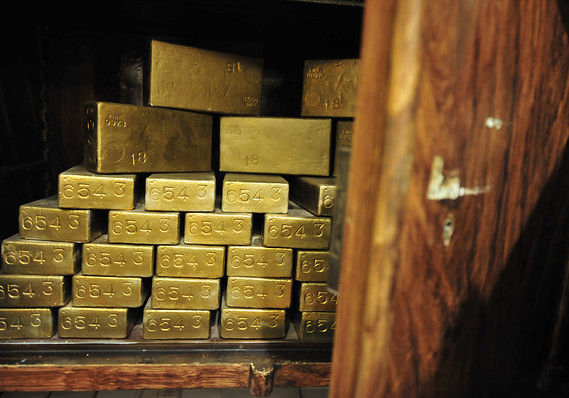 
Gold edged higher early Monday as sellers paused the heavy selling that drove futures sharply lower at the end of last week, with traders looking ahead to interest-rate policy meetings that could set the near-term course for dollar/yen trading and precious metals.

Silver for May delivery SIK6, +0.33% was little changed near $16.86 an ounce. Gold ended last week modestly lower after a tumble on Friday. Silver, which has been outrunning gold as it finds underlying industrial-use demand, advanced 3.6% last week. That was its third straight weekly gain.

The dollar fell 0.6% to 111.13 Japanese yen USDJPY, -0.81% Monday after hitting a three-week high against this rival on Friday. That move, in fact, followed recent record-high bullish yen positioning among speculative investors, according to some measures. Read more on currency trading.

Central banks could drive currency and metals trading this week. The Bank of Japan is scheduled to issue its policy decision Thursday, a day after the Tuesday-Wednesday gathering of the Federal Reserve wraps up.

“It is widely expected that [the Fed] will sit back and do nothing…,” said Naeem Aslam, chief market analyst with AvaTrade. That leaves the Bank of Japan’s decision-making the bigger possible market mover over the Fed, he said.

Dollar/yen remains underpinned “mainly based on the expectations that the [Bank of Japan] will take aggressive measures to weaken the currency,” said Aslam.

But longer term, the expected expansion of monetary accommodation in Japan is unlikely to further support already strong gold unless policy makers essentially “shock” markets with an expansion of negative interest-rate policy, analysts have said.

And those analysts mostly stress that the eventual path for U.S. interest rates continues to point higher, which could support the U.S. dollar and limit the upside for gold.

And those analysts mostly stress that the eventual path for U.S. interest rates continues to point higher, which could support the U.S. dollar and limit the upside for gold.
Click to expand...

Oh really? When does this "eventual path" begin to take shape? Rates have been on a sustained downward slope for the past 35 years. I'm not holding my breath.

The rest of the world's counterfeiters devalue their currencies, which drives the appearance of USD "strength" and gives the US counterfeiters cover to devalue their own currency. This is all just a shell game.
Hypocrite says "If you don't hold it, you don't own it!" ...turns around and buys PM "shares" from JPMorgan.
"It is no measure of health to be well adjusted to a profoundly sick society." ~ Jiddu Krishnamurti
"None are more hopelessly enslaved than those who falsely believe they are free." ~ Johann Wolfgang von Goethe
“In individuals, insanity is rare; but in groups, parties, nations and epochs, it is the rule.” ~ Friedrich Nietzsche™
F

solarion said:
...This is all just a shell game.
Click to expand...

For the innermost big players it is a shell game- they work together often in an effort to protect each other. But in general, when you include all the players, it's more like the games of musical chairs and high stakes, no-limit poker rolled into one.
The republic was a nation built upon inalienable rights, it was not intended to be a democracy for the dictates of the majority, the powerful or the influential.
You must log in or register to reply here.
Share:
Twitter Share Link