Gold may rally to as high as $1,400 an ounce should risk aversion intensify, according to the top-ranked precious metals forecaster, who dubbed bullion a “superhero” when raising his outlook for 2016.

The metal may remain above $1,200 this quarter and possibly into next as investors seek a haven, Oversea-Chinese Banking Corp. economist Barnabas Gan said in an e-mail to Bloomberg. Singapore-based Gan, who previously saw prices dropping to $950 at the end of the year, revised his outlook in a Feb. 19 report, and now sees a range of $1,000 to $1,150 by the end of 2016.

The precious metal is the best performer among commodities this year as concern about a slowing global growth and slumping oil prices spurred financial-market turmoil and increased speculation that the Federal Reserve will hold off on raising U.S. borrowing costs. As investors piled into bullion-backed funds and producers’ shares jumped, forecasters including Gan have been prompted to rework their outlook for 2016.

“Gold is performing largely as a safe-haven asset given the equity doldrums and overall risk aversion,” Gan said in response to e-mailed questions, laying out his case for changing his forecasts. “Should risk aversion dominate amid intensified global growth headwinds, gold may well rally to as high as $1,400.” 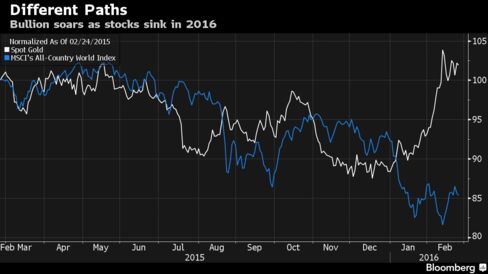 “Amid the global equity downturn, very low oil prices and magnified risk aversion seen since the start of the year, one hero stood up strong, providing shelter,” Gan wrote in the report, describing bullion as a “gold, the superhero” in a headline. OCBC was ranked by Bloomberg as the top precious metals forecaster for the final quarter of last year.

The surge has lured investors to exchange-traded products, which have swollen to the highest level since March, and boosted miners’ shares. Newcrest Mining Ltd., Australia’s biggest producer, is up 28 percent in Sydney this year, while Zijin Mining Group Co. advanced 14 percent in Hong Kong.

Gan’s outlook for the year-end depends on how many times the Fed actually raises rates. The target for $1,000 is based upon the assumption of three hikes, while $1,150 sees a single increase, Gan wrote in the report.

Global Outlook
“Of course, this outlook is predicated on a relatively rosy global outlook,” Gan said in the e-mail, citing factors that included sustained economic growth in the U.S. and no hard landing or rampant defaults in China.

Traders are pricing in a 10 percent chance of a rate increase at the Fed’s meeting in March, down from 51 percent at the beginning of 2016. Policy makers should be prepared to consider raising rates next month despite recent volatility, Kansas City Fed President Esther George said on Tuesday, citing her outlook for solid growth this year.