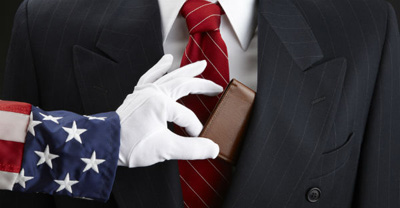 According to financial research firm ICI, total retirement assets in the Land of the Free now exceed $23 trillion.

$7.3 trillion of that is held in Individual Retirement Accounts (IRAs).

That’s an appetizing figure, especially for a government that just passed $19 trillion in debt and is in pressing need of new funding sources.

Even when you account for all federal assets (like national parks and aircraft carriers), the government’s “net financial position” according to its own accounting is negative $17.7 trillion.

And that number doesn’t include unfunded Social Security entitlements, which the government estimates is another $42 trillion.

The US national debt has increased by roughly $1 trillion annually over the past several years.

The Federal Reserve has conjured an astonishing amount of money out of thin air in order to buy a big chunk of that debt.

But even the Fed has limitations. According to its own weekly financial statement, the Fed’s solvency is at precariously low levels (with a capital base of just 0.8% of assets).

And on a mark-to-market basis, the Fed is already insolvent. So it’s foolish to think they can continue to print money forever and bail out the government without consequence.

The Chinese (and other foreigners) own a big slice of US debt as well.

But it’s just as foolish to expect them to continue bailing out America, especially when they have such large economic problems at home.

US taxpayers own the largest share of the debt, mostly through various trust funds of Social Security and Medicare.

But again, given the $42 trillion funding gap in these programs, it’s mathematically impossible for Social Security to continue funding the national debt.

This reality puts the US government in rough spot.

It’s not like government spending is going down anytime soon; it already takes nearly 100% of tax revenue just to pay mandatory entitlements like Social Security, and interest on the debt.

Plus the government itself estimates that the national debt will hit $30 trillion within ten years.

Bottom line, they need more money. Lots of it. And there is perhaps no easier pool of cash to ‘borrow’ than Americans’ retirement savings.

$7.3 trillion in US IRA accounts is too large for them to ignore.

And if you think it’s inconceivable for the government to borrow your retirement savings, just consider the following:

Forced loans have been a common tactic of bankrupt governments throughout history.

Plus there’s recent precedent all over the world; Hungary, France, Ireland, and Poland are among many governments that have resorted to ‘borrowing’ public and private pension funds.

2) The US government has already done this with federal pension funds.

During the multiple debt ceiling fiascos since 2011, the Treasury Department resorted to “extraordinary measures” at least twice in order to continue funding the government.

What exactly were these extraordinary measures?

They dipped into federal retirement funds and borrowed what they needed to tide them over.

In fact, the debt ceiling debacles were only resolved because the Treasury Department had fully depleted available retirement funds.

3) They’ve been paving the way to borrow your retirement savings for a long time.

Two years ago the government launched a new initiative to ‘help Americans save for retirement.’

It’s called MyRA. And the idea is for people to invest retirement savings ‘in the safety and security of US government bonds’.

Since then they’ve gone on a marketing offensive involving the President, Treasury Secretary, and other prominent politicians.

(Most recently Nancy Pelosi published an Op-Ed in the San Francisco Chronicle a few days ago promoting the program.)

They’ve also proposed a number of legislative reforms to ‘encourage’ American businesses to sign their employees up for MyRA.

Just last week, Congress introduced the “Making Your Retirement Accessible”, or MyRA Act, which would charge a penalty to employers whose workers don’t have a retirement account.

The proposed penalty is $100. Per worker. Per day.

Imagine a small business with, say, 10 employees who don’t have retirement accounts. The penalty to Uncle Sam would be a whopping $30,000 PER MONTH.

There’s a word for this. It’s called extortion.

Obviously when facing a $30,000 monthly penalty, an employer will pick the easiest option.

Given the absurd amount of government regulation on the rest of the financial industry, MyRA is the fastest choice.

This isn’t about fear or paranoia. It’s about facts.

And the reality is that the government in the Land of the Free is moving in the direction of borrowing more and more of your retirement savings.

If you still remain skeptical, remember that last year the government stole more from its citizens through Civil Asset Forfeiture than thieves in the private sector.

Or that just 45-days ago a new law went into effect authorizing the government to strip you of your passport if they believe in their sole discretion that you owe them too much tax.

No judge. No jury. No trial. They just confiscate your passport.

This is happening. It’s a reality that rational, thinking people should plan for.

And yes, there are solutions for now.

For example, it’s possible to set up a more robust retirement structure that protects your savings and gives you much greater influence over your funds.

This is something that may make sense no matter what; it may be a good idea regardless to do some long-term financial planning that increases your influence over your own retirement savings and expands your investment options.

And if you want to learn more about the risks and solutions for your retirement savings, click here to access our free black paper.

Our goal is simple: To help you achieve personal liberty and financial prosperity no matter what happens. Get the tools and information you need to prepare yourself for what's coming. Download this free Plan B checklist and join us on a live webinar to learn how to make more money, keep more of it, and protect your freedom by diversifying internationally 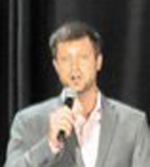 Simon Black is an international investor, entrepreneur, and founder of Sovereign Man. His free daily e-letter Notes from the Field is about using the experiences from his life and travels to help you achieve more freedom, make more money, keep more of it, and protect it all from bankrupt governments.

Scorpio said:
Imagine a small business with, say, 10 employees who don’t have retirement accounts. The penalty to Uncle Sam would be a whopping $30,000 PER MONTH.

There’s a word for this. It’s called extortion.

Obviously when facing a $30,000 monthly penalty, an employer will pick the easiest option.
Click to expand...

I would sell out immediately for any price, and just shut the $#% down,

Going totally off grid, and out of the system in all ways

There would be no income, no tax returns, no nothing for our overlords,
Sound of Silence

It isn't if they will take all of the privately held retirement funds it's when, and TPTB will get the people holding those funds to beg them to be taken from them.

Sad thing is all that money will be absorbed and blown with nothing to show for it and TPTB won't even break a sweat doing it. They they will demand more.
"And yeah, you're gonna get wet"~ Jeff Williams

It's always some bull shit that starts put small, and then it slowly gets bigger.
Arm Leg Leg Arm Head

My plan is too keep some in 401k, some in annuities, some in CDs, some in metals, some in firearms and ammo, some in food, some in cash, all in a nice evenly spread out manner. If (actually when) the financial meltdown occurs (and an event like this will certainly trigger it) I'll still have 'some' somewhere whereas most people will have nothing. When the SHTF I'll recover whatever I can and get off the grid completely. It's the only way I sleep at night and not worry about this stuff
'I pledge allegiance to the flag of the United States of America; and to the Republic, for which it stands, one nation under God, indivisible, with liberty and justice for all!'
(except in California, New York, New Jersey, Michigan, Illinois, Massachusetts, parts of Oregon and WA state, and all of Washington DC)