How Joseph Stalin Concealed the Death of Adolph Hitler 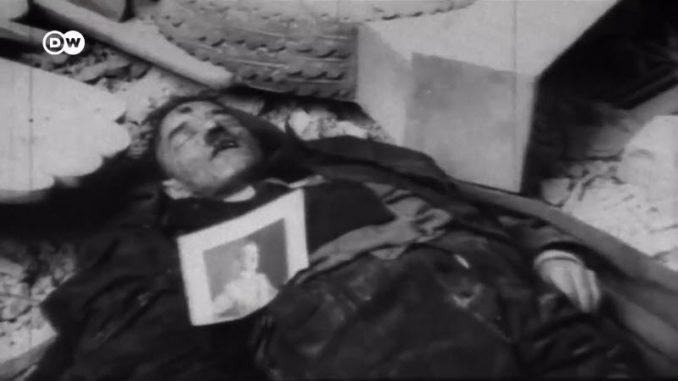 The death of Adolph Hitler has long been shrouded in mystery and in suspicion that he escaped to South America where he assumed a new persona and lived in luxury until death by old age. This suspicion was fueled by none other than Joseph Stalin who spoke about it and defended the story until his own death. This documentary uncovers the hidden documents and the testimonies of those who had primary information about this matter. Some of those who gave testimony were kidnapped by Stalin’s agents and spent most of their lives in prisons and concentration camps to ensure that their testimony would not be heard. This is the story of how the truth was eventually discovered and what the motive was for keeping it hidden from the world. ‒2020 Apr 30 – Source: DW Documentary

Clear and concise, a well done documentary and worth the time to watch!
Orthodox Jedi
Make mine a vodka and vicodin latte.

Going to watch this later, as WWII / Nazi Germany is a personal interest of mine.

In the meantime, here's some details I know of....

Did the video mention that the man shown in the picture was Gustav Weber (pronounced "VA-ber" for you on-German speakers). Gustav Weber was the Der Fuhurer's "double", he was used throughout the war to conceal Hitler's true location, allowing Hitler to appear in one place, while he was elsewhere. As the "raping monsters", as Martin Bormann referred to the Ruski's in the OberKommando der Wehrmacht daily briefings (he was a real piece of work) closed in on the Reich Kanzlei in late April 1945, the order was given (probably by Bormann himself) to shoot Weber in the head and create a diversion, in case Hitler decided to break out.

I think the use of Weber's dead body in place of Hitler was obviously a fake to most people (the guy looks nothing like Hitler in the photo), which spawned the belief that Hitler did indeed break out of Berlin on or Around April 30, 1945. I really doubt the story, though. By the war's end, Hitler was a physical and mental wreck, dependent on multiple daily injections of methamphetamine, provided to him by Doctor Morell, his personal physician. Heinz Linge, Hitler's valet and a man who survived the war, testified that upon awaking each morning, Morell would promptly enter Hitler's sleeping quarters, roll up Hitler's sleeve, and pump him full of crystal meth so he could face the day. As the military situation deteriorated on all fronts, Hitler's use of meth spiked upward, and his decisions became so erratic, most officers no longer could obey them.

In the last week of the war, Hitler dismissed Morell, allegedly when Morell could no longer provide him his crystal meth, since the Reich Kanzlei was surrounded and no further supplies could be brought in. Morell offered Hitler a shot of Morphine to calm him down instead, that's when Hitler blew his stack and dismissed Morell. Morphine was not a drug the Nazi's approved of, they considered it a "Jewish" drug. Hitler reacted the way he did because most people in Hitler's circle knew that Reichsmarshall Goering himself was a morphine addict, and he had fallen out of favor by the war's end, due to the failure of Goering's Luftwaffe to defend the skies over Germany. Germany industry was pulverized from 1942 onward and their ground operations were virtually brought to a standstill by the superior air forces of the USA and Britain (not to mention the Russians, and their ground attack Sturmovik aircraft, which they produced by the thousands).

So, none of the people that were in the bunker on April 30, 1945 ever intimated that Hitler had escaped. They all maintained the same story that Hitler shot himself. Hitler had never given any indication that he wanted to flee Berlin and often became enraged when his underlings would suggest such a thing.

I'll post more once I watch the video.
Last edited: Saturday at 7:32 PM

Forgot one not-so-minor detail...Hitler's alleged mental "breakdown" in the Reich Kanzlei on April 22 (after he was told about the failure of SS General Felix Steiner's forces to launch a counter-attack as ordered) was very likely brought on by withdrawal syndrome, since he had runout of methamphetamine by then and was in pretty rough shape. A guy going through drug withdrawal and Parkinson's disease would be an unlikely candidate for a breakout of the capital at that point. He probably could not have done it physically.

The video was spot on, although many details were omitted, such as the identity of the "double" used in that photo (Gustav Weber) and the outcome of many of the people in Hitler's inner circle that fled the Fuhurerbunker on 1 May 1945 hours before the Russians stormed it. For example, Martin Bormann, who joined a small breakout group, was killed by an approaching Russian patrol on the evening of 2 May 1945, along with an SS Doctor Ludwig Stumpfegger. This testimony was given by Artur Axman, Hitler Youth Leader, who survived the war. Despite this, there is still an alternative floating around that this testimony was garbage and that Bormann made it to South America and actually founded a clandestine Nazi colony called "Waldner 555", but this appears to be more a fiction than fact.
You must log in or register to reply here.
Share: Twitter Link