Illinois Bill Would Ban Adults From Pumping Their Own Gas

Our Glorious Leaders must save us from ourselves!

Illinois Bill Would Ban Adults From Pumping Their Own Gas
Rep. Camille Lilly, who authored the bill, says her legislation will lead to more safety, convenience, and jobs.
CHRISTIAN BRITSCHGI | 2.12.2020 11:10 AM 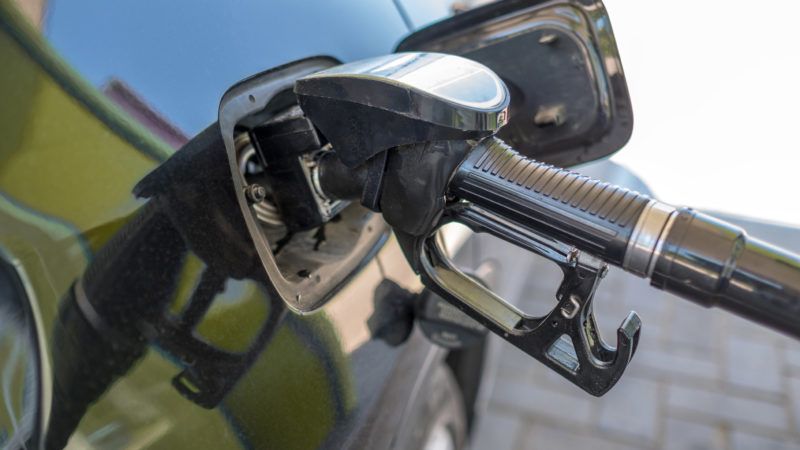 The free market experiment of letting people pump their own gas is over. It failed. That appears to be the message behind a new piece of Illinois legislation that would prohibit self-service gas stations.

"No gas may be pumped at a gas station in this State unless it is pumped by a gas station attendant employed at the gas station," reads the Gas Station Attendant Act, which was introduced last week by state Rep. Camille Lilly (D–Oak Park).

Lilly's proposal has raised eyebrows. The representative told a columnist with Peoria's JournalStar that the response to her bill had been "really aggressive."

​
In an attempt to quell some of this outrage, Lilly took to Twitter. Her bill, she said, would create "safety and convenience at the pump." She also has said that it is her intention to amend the bill to merely mandate minimum staffing levels at gas stations.

​
Camille Y. Lilly@replilly78​
​
HB4571 is concept legislation that creates safety and convenience at the pump. It is not intended to pass as is. The bill seeks to create options for self-service, service by gas station attendant, and jobs. Input is valuable to shape into legislation the people of IL desire.​
4​
4:16 PM - Feb 11, 2020​
Twitter Ads info and privacy​
Increasing safety is the best justification for Lilly's bill. It's still not a very good one.

According to a study from the National Fire Protection Association, there were 5,000 gas station fires per year between 2004 and 2008, which resulted in an average of two deaths a year and $20 million in property damage. That seems like a pretty small risk given that there were 117,000 gas stations in the country at the time. The number of gas station fires has also fallen dramatically since 1980, the NFPA notes, even as self-service has become more common.

There's also not much reason to assume that a gas station attendant who's responsible for filling up multiple cars at once is going to be more careful than individual motorists.

While drivers in the states that still mandate full-service like to talk up the convenience of not having to get out of their car, the fact that the practice doesn't persist when it's not mandated is proof enough that people are not willing to pay the costs of this higher level of service.

The Illinois Policy Institute, a think tank, notes that motorists in that state are already paying the third-highest gas taxes in the country.

Self-service stations can also create convenience in other ways. The fewer staff members needed to man the pumps mean businesses can reassign employees to manning registers, making food, or performing other tasks their customers value more.

Lower operating costs at self-service gas stations might also mean gas stations can afford to stay open later or operate in more remote locations, where business is slower. Oregon's legalization of self-service pumps in rural counties was all about increasing service levels in remote areas of the state where it wasn't economical to have a gas station attendant on hand 24 hours a day.

Lilly's desire to create jobs is also a poor justification for either banning self-service gas stations or mandating staffing levels.

The more consumers have to pay for a service they don't want, the less money they have to spend on other things that they do want. Higher staffing costs leave gas stations with less money to pay vendors or reinvest in their businesses.

The effect is to make the economy poorer and less productive. That's not a win for capital, labor, or consumers.
The one silver lining in Illinois' proposal is how much people hate it. In Oregon and New Jersey, motorists have strong negative reactions to rolling back their state's full-service mandates. Illinois residents are clearly having the opposite reaction.

​
This demonstrates the small-c conservativism of many voters; once people have the right to do something, they are not eager to lose it.

Visited Oregon last year....its law there.....it took me a while to come to grips with the fact I couldn't pump my own gas...I think it was the fact I COULDN'T

Another solution without a problem from the leftist controllers
'I pledge allegiance to the flag of the United States of America; and to the Republic, for which it stands, one nation under God, indivisible, with liberty and justice for all!'
(except in California, New York, New Jersey, Michigan, Illinois, Massachusetts, parts of Oregon and WA state, and all of Washington DC)
http://chuckmaultsby.net/id145.html

I worked my way through college (among other jobs) as a pump jockey.

gas pumps = a vibrant criminal hunting ground
EO 11110 character is fiction and for entertainment purposes only - and should not be construed as any real human's opinion. The EO character is EXACTLY like any other fiction character - like those in movies, tv shows, books, poems, songs. Pure fiction and pure entertainment - nothing else

Gas pumps to be designated as Gun Free Zones!
'I pledge allegiance to the flag of the United States of America; and to the Republic, for which it stands, one nation under God, indivisible, with liberty and justice for all!'
(except in California, New York, New Jersey, Michigan, Illinois, Massachusetts, parts of Oregon and WA state, and all of Washington DC)
http://chuckmaultsby.net/id145.html

That's gonna make the POG go up!
Disclaimer: this post and the subject matter and contents thereof - text, media, or otherwise - do not necessarily reflect the views of the GIM2 administration.

Yep, its always about the safety. BULL!
H

hoarder said:
You have to understand which demographic the legislation is intended to help. They're just trying to find positions for all the invaders they're letting in.
Click to expand...
While they're pumping your gas they're stealing your hubcaps
'I pledge allegiance to the flag of the United States of America; and to the Republic, for which it stands, one nation under God, indivisible, with liberty and justice for all!'
(except in California, New York, New Jersey, Michigan, Illinois, Massachusetts, parts of Oregon and WA state, and all of Washington DC)
http://chuckmaultsby.net/id145.html

the_shootist said:
While they're pumping your gas they're stealing your hubcaps
Click to expand...
LOL
in Ca, they have what's called EVR2 or some such name, and what that amounts to is :
Instead of allowing the 'vapor' from your fuel tank, come back into the bellows of the nozzle as it's being displaced by the liquid, this 'upgraded' system has an actual vacuum pump that draws out the vapors from your tank...

Think About It:
Positive Air Flow from your tank actually draws fuel vapors back into the stations equipment

What this 'boils down to' the equivalent of 1 gallon was siphoned back into the stations equipment for every 30 gallons (28 actual) that was pumped and paid for by the customer...soooooo

You pay for gasoline you aren't even getting...

I was there, i was yelled at by CalEPA guys, etc, there's much more, however...

I have learned to pull the bellows back and allow atmosphere get drawn back into the system, not my gas

total felony, yeah guys, i'm a felon, not by birth but by decree, and my savings, yearly, have been quite good!

pass it on
no one wants me to become unreasonable
C

China has coronavirus, the "progressive" states in the US have the "retardivirus".
Infinte growth collides with finite energy.

" Do the hoky poky and shake it all around....thats what its all about"
S

I wouldn't trust them to zero the pump. When I used to travel in Mexico I got scammed, before I could get out and back to the pump they were already filling the tank. It wasn't a large amount, maybe a couple of bucks, but after that, locking gas cap.
Money Is Weighed, Fictions Are Counted

Could bring back the old belt mounted coin changers.
Oak park Rep, figures, nothing but prog/soc/comm's there.
Deplorable, Bitter Clinger & Proud of it.
The only place I want to see a liberal/soc/comm is in a museum.
"Virulent" "Dreg of Society" "Despicable" & Still Proud.
Domestic Enemy of the State.

ttazzman said:
Visited Oregon last year....its law there.....it took me a while to come to grips with the fact I couldn't pump my own gas...I think it was the fact I COULDN'T
Click to expand...
Jobs.

All cash, and pump before you pay.

Amazing the trunk-loads of sh*t that people would attempt to barter for gas.

ZZZZZ said:
I worked my way through college (among other jobs) as a pump jockey.

Good memories being a fuel attendant.
When one of the kids was in koledge, we would have to travel to New jewsy. Anticipating the times we'd have to purchase gas, I'd bring some clad half dollar pieces just so I could tip the attendants.

Not a problem down here! You yanks are making like complex!
Cheers
Z

" Do the hoky poky and shake it all around....thats what its all about"
Click to expand...
You beat me to it...

Illinois is broke...needs more taxes.
For God so Loved the World that He gave His ONLY Son - so that whosoever would believe in Him He would give them eternal life.

"The abandonment of the gold standard made it possible for the welfare statists to use the banking system as a means to an unlimited expansion of credit. In the absence of the gold standard, there is no way to protect savings from confiscation through inflation. There is no safe store of value. Deficit spending is simply a scheme for the hidden confiscation of wealth. Gold stands in the way of this insidious process. It stands as a protector of property rights. If one grasps this, one has no difficulty in understanding the statists' antagonism toward the gold standard.

Gold is a currency. It is still, by all evidence, a premier currency, that no fiat currency, including the dollar, can match. Gold still represents the ultimate form of payment in the world. Fiat money in extremis is accepted by nobody. Gold is always accepted."
-Alan Greenspan
F

Late night self serve station, Raven 25 acp for protection, never used it. Good times and I did trade gas for weed.
Free America from the real Welfare Queen...Israel.
Free Palestine, give it back to the people who don't need welfare.
Boycott Israel, FREE America. BDS, learn it.
You must log in or register to reply here.
Share: Twitter Link