In Norway, Kids Slice Out Cod Tongues for Serious Money

In Norway, Kids Slice Out Cod Tongues for Serious Money​

In the remote Lofoten Islands, youngsters are happy to embrace tradition by collecting the local delicacy and selling their wares 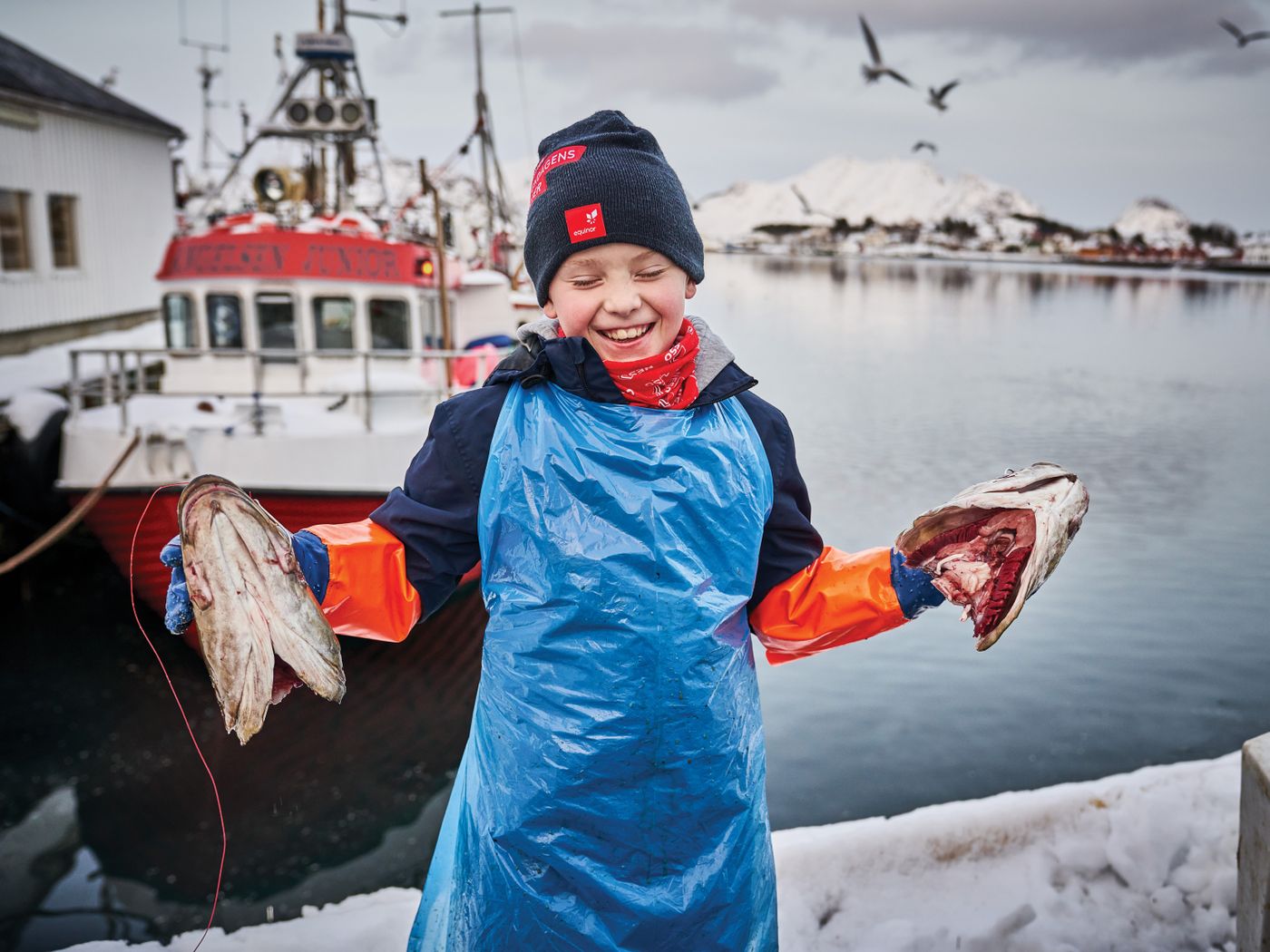 Jørgen Botolfsen, pictured in 2020 outside Ballstad Fisk AS, where he helps process cod. “Bigger kids are stronger and faster,” he says.


Pay a winter visit to Norway’s remote Lofoten Islands, north of the Arctic Circle, and it’s impossible to miss the rows of headless fish carcasses hanging from wooden racks to dry. Follow the snaking two-lane road from village to village and you’ll arrive at the dock of H. Sverdrup AS fish factory in a town called Reine. When I visited, a group of kids with sharp knives and bloody smocks stood huddled together for warmth. School had just ended, and they were waiting for more cod heads to arrive.
The kids are known as tungeskjaererne, or tongue cutters. It was early March 2020, the middle of fishing season, when Arctic cod known as skrei migrate to the Norwegian coast to spawn. Cod tongue, tender and jellylike, is a local delicacy. “The best meat of the fish,” said Jakob Arctander, a local fish exporter. “It’s got the consistency of filet mignon.”
The job makes selling Girl Scout cookies or running a lemonade stand look like child’s play. The fishing village of Reine in the Lofoten Islands. The archipelago was settled around the tenth century by Vikings, who were drawn by plentiful cod. Mark Katzman Guilbert Gates
For as long as anybody can remember, tungeskjaererne have been responsible for the local cod tongue trade, even as fish factories give up the money they would otherwise get from the tongues by donating the fish heads to children and teenagers. The tradition introduces young people to the fishing industry, and teaching them the value of entrepreneurship and hard work seems to matter more than making an extra kroner or two. “Fishing is the most important thing that we have here,” said Arctander, who sometimes let his 6-year-old son stay up until midnight cutting tongues. “Fisheries will always be our main source of work.”
The job makes selling Girl Scout cookies or running a lemonade stand look like child’s play. Arctander knows tungeskjaererne who have made more than $11,000 in a single season. “I haven’t thought of anything else in the world where kids can make so much money,” he said.
Sea gulls swarmed overhead as a small fishing boat approached the dock. The haul was brought inside the factory, and the sound of scraping metal signaled that workers had fed the fish into a processor to slice off the heads. The bodies would be salted, frozen or dried as stockfish—unsalted fish that’s hung for months in the open air to dry—and then exported for food. The heads were collected in large bins, to be moved outside for the kids. A fisherman in Ballstad. Each winter, fish factories in Lofoten donate cod heads to local children, who remove and sell the tongues—a delicacy. Mark Katzman A hjell, or wooden A-frame, for stockfish—unsalted cod hung to dry outdoors for months. The preservation method was pioneered by Vikings. Christopher Wilson Benedicte Trones entered the special tongue-cutting workforce at age 12. The repetitive labor first hurt her arm, but she became used to it. Christopher Wilson August Johansen, 10, has been cutting cod tongues for four years. He likes to spend his earnings on chocolate. Christopher Wilson
That children as young as 6 go straight from school to the docks, where they spend hours in the numbing cold coated in fish guts, sharp knives in hand, may seem bizarre when viewed from the perspective of today’s developed economies and increasingly virtual workplaces. But the rarefied nature of this work, proudly undertaken by kids who feel a connection to the tradition, is part of what makes the practice so fascinating. The task itself involves spearing the head onto a giant metal spike and then slicing out the tongue. The heads were thrown into a bin, to be strung up and dried for export to Nigeria, where they’re a popular ingredient in traditional soups and stews. The tongues piled up on the spike until they reached the top and were then tossed into a bucket. The kids’ handiwork was so quick it was difficult to make out the distinct steps. Heads were grabbed, spiked, sliced, tossed, grabbed, spiked, sliced, tossed, until the large bin was empty and a new batch of cod heads arrived. Despite harsh winds and below-freezing temperatures, a few of the older tongue cutters, who work fast, were sweating. Piles of snow were pink with blood, but they didn’t seem to mind.
Heads were grabbed, spiked, sliced, tossed, grabbed, spiked, sliced, tossed, until the bin was empty. After processing, cod heads are dried for export, primarily to West Africa, where the foodstuff has been a mainstay since it was introduced in the 1960s. Mark Katzman A worker places a fish head on a spike so the tongue is impaled, cuts the tongue, discards the head. This stack of pierced tongues is about to be collected. Mark Katzman Left, Markus Braekken, who cut tongues once a week, said one of the tough things about the job was cold hands. He learned the trade from his grandfather. Upper right, at home in Ballstad, Jørgen Botolfsen flaunts his earnings. On a good day he made more than $25 cutting tongues; he bought himself a gaming chair. Lower right, Lill-Tove Frantzen fries cod tongues at home in Ballstad. Some children don’t enjoy the dish, but many acquire a taste for it as they grow older. Christopher Wilson; Mark Katzman (2) Magnus Bendiksen hopes to be a fisherman. “They learn by being in the fish atmosphere,” Hartvig Sverdrup, a fish exporter, says of such youngsters. Maggie Katzman
At the end of each night, the cutters took their haul home to be washed, weighed and vacuum-packed or block-frozen. Their customers, curiously, tend to be local—generally family, friends and restaurant owners. In the old days, children sold tongues door-to-door. Now many use Facebook Marketplace. “The charm of it is all gone,” said Steve Nilsen with a sigh. His son, Martin, was a tongue cutter in the village of Ballstad. Hjell are common in Lofoten during winter and spring. Stockfish, seldom seen in the U.S., is popular in Europe and Africa. Mark Katzman Alida Sofie Wahl Hansen, who comes from a fishing family, during her second session cutting tongues. She planned to use her savings to buy a phone. Mark Katzman
The most traditional way to prepare the delicacy is to poach or fry the meat and serve it alongside potatoes and raw shaved carrots. But variations have evolved: served with cod roe and celery root, for example, or deep-fried with capers and tarragon. Jørgen Botolfsen, then 10, couldn’t stand the taste of cod tongue, but he earned more than $5 for every 2.2 pounds he sold. His mother, Anniken Marie Geirsdatter, made enough money as a teenager—$32,000 in six years—that she was able to buy a car, pay for driving lessons and make a down payment on a home. “I want Jørgen to learn that it’s not easy to make money—it’s hard work,” she said.
Because Jørgen wasn’t old enough to drive himself to the dock, Geirsdatter sat in the car, observing him at work. He didn’t enjoy the supervision. “Mommy,” he said, “you don’t have to watch me cut all the time—I’m not a kid anymore.” 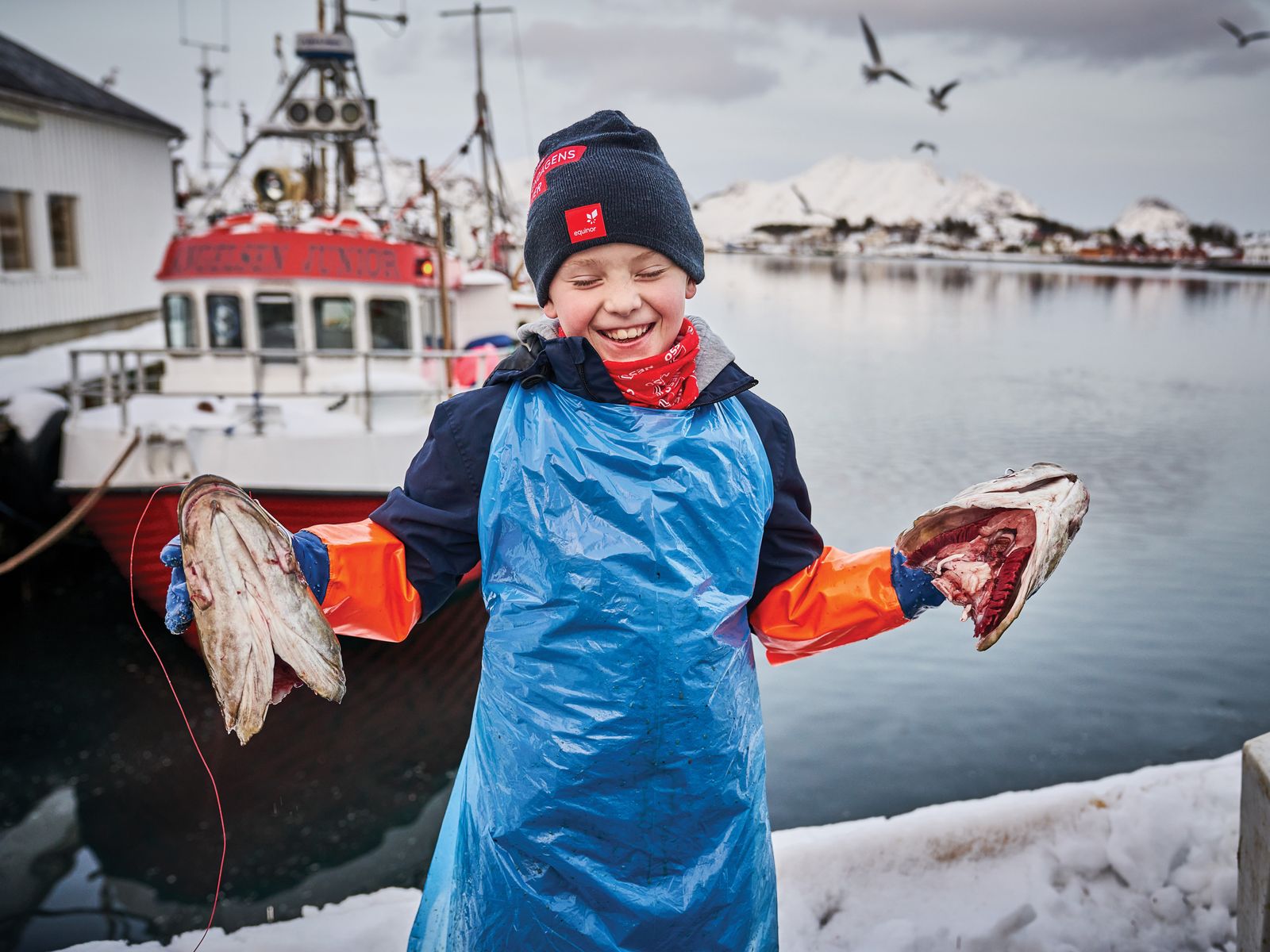 In Norway, Kids Slice Out Cod Tongues for Serious Money

In the remote Lofoten Islands, youngsters are happy to embrace tradition by collecting the local delicacy and selling their wares

That is a great read. Thank you for the posting, Scorpio!

When I read the article I couldn't stop thinking - Imagine the outcry if this we're going on somewhere here in the states.
The left would simply explode.

Especially when I came across this part:


Scorpio said:
The tradition introduces young people to the fishing industry, and teaching them the value of entrepreneurship and hard work seems to matter more than making an extra kroner or two. “Fishing is the most important thing that we have here,” said Arctander, who sometimes let his 6-year-old son stay up until midnight cutting tongues.
Click to expand...

I can picture folks in California screaming "You let your six year old do what?"
Child protective services phones would be ringing nonstop.

Around here, it's walleye cheeks.
​
The market value of precious metals is, as that of all other things, in the compound ratio of their utility and of their scarcity.

"People do not have the right to unregulated rights in this country." -- Al Sharpton
T

Location
Land of the Free

Walleye cheeks in Minnesota, the best.

Location
lost in a corn maze in Ohio

I couldn't help but notice the wonderful lack of diversity among the tungeskjaererne.
Laugh, and the world laughs with you. Run up and down the halls screaming from existential angst, and the world gets very annoyed and puts you in a padded cell.

wastrel said:
I couldn't help but notice the wonderful lack of diversity among the tungeskjaererne.
Click to expand...