I wonder who was on this flight...? 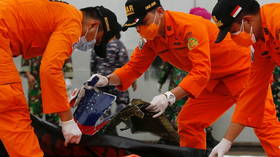 Indonesian rescue members inspect what is believed to be the remains of the Sriwijaya Air plane flight SJ182, which crashed into the sea, at Jakarta International Container Terminal port in Jakarta, Indonesia, January 10, 2021. © REUTERS/Ajeng Dinar Ulfiana

Indonesian-operated Sriwijaya Air Flight 182 went missing on Saturday afternoon while traveling from Jakarta to Pontianak in West Kalimantan province. The plane reportedly experienced an hour delay before takeoff, and then disappeared from radar four minutes after becoming airborne. Authorities are still investigating what caused the tragic accident. Officials say the initial delay was due to bad weather and that a maintenance report stated that there were no issues with the aircraft before the fatal flight.

The Boeing 737-500 was carrying 62 people, including seven children and three babies. No survivors have been found.

The crash marks the worst air accident for Indonesia since the Lion Air tragedy in October 2018, when a Boeing 737 MAX 8 jet crashed into the Java Sea shortly after taking off from Jakarta. All 189 people on board were killed. The accident, followed by another crash in Ethiopia involving the same plane model, led to the grounding of the MAX 8 for nearly two years over concerns about the aircraft’s automated flight-control system.

gotta be one of the worst jobs in the world, finding dead body parts

i'd rather sling cow manure
don't sell me tomorrow, tell me today

The jetliner lost more than 10,000 feet in altitude in one minute, four minutes after departure, according to the flight tracking service FlightRadar24.com. The plane's last known altitude was 250 feet; its highest altitude was 10,900 feet, the service reported.

A plane flying from Jakarta to Pontianak would spend most of the flight over the Java Sea.

Fishermen in the area around Thousand Islands, a chain north of Jakarta’s coast, reported hearing an explosion around 2:30 p.m. Saturday.

“We heard something explode. We thought it was a bomb or a tsunami, since after that we saw the big splash from the water,” fisherman Solihin, who goes by one name, told The Associated Press by phone.

“It was raining heavily and the weather was so bad. So it is difficult to see around clearly. But we can see the splash and a big wave after the sounds. We were very shocked and directly saw the plane debris and the fuel around our boat.”

Television footage showed relatives and friends of people aboard the plane weeping, praying and hugging one another as they waited at the airports in Jakarta and Pontianak.

According to the BBC, the Boeing 737 jet is not a Max, the plane involved in deadly crashes in 2018 and 2019 that resulted in the jets being grounded worldwide. The South China Morning Post reported that the Sriwijaya Air plane was about 26 years old.

Sriwijaya Air is one of Indonesia’s discount carriers, flying to dozens of domestic and international destinations.

Indonesia, the world’s largest archipelago nation with a population of more than 260 million, has been plagued by transportation accidents on land, sea and air because of overcrowding on ferries, aging infrastructure and poorly enforced safety standards.

In October 2018, a Boeing 737 MAX 8 jet operated by Lion Air plunged into the Java Sea just minutes after taking off from Jakarta, killing all 189 people on board. It was the worst airline disaster in Indonesia since 1997, when 234 people were killed on a Garuda flight near Medan on Sumatra island. In December 2014, an AirAsia flight from Surabaya to Singapore plunged into the sea, killing 162 people.

Airplane would go to Pontianak Airport from Jakarta Airport. There were 62 people on board, including the crew. Last contact with the plane, with the call sign SJY182, was made at 14:40 local time (07:40 GMT), according to the transport ministry. The Sriwijaya Air 737 was 26 years old.

IDK who makes those videos, but they certainly help understand what just happened...

inverted...the cabin noises had to be horrific

one 'good thing', sorry, but, the families will now be 'out of poverty'...

Pretty impressive to have an animation before the recorders were recovered. I haven't found the eyewitness reports that it went inverted.

Goldhedge said:
The jetliner lost more than 10,000 feet in altitude in one minute,
Click to expand...
Damn! Any airplane can (will) be a glider when the motor stops. If I remember right, a typical airplane will get 10 to 1, but a glider might be 20 to 1. Anyway, my experience with small aircraft is that 10K feet per minute is unreal. One thousand feet per minute was a really disturbing figure when I had to face air currents over a mountain. That was more than my poor airplane could do! Details for those doubters: Carson City, NV, then over Lake Tahoe to California.
Politicians understand sound money in the same way that my dog understands my oscilloscope's delayed trigger.

Someone_else said:
Damn! Any airplane can (will) be a glider when the motor stops.
Click to expand...
Miracle On The Hudson
for example....

Goldhedge said:
The jetliner lost more than 10,000 feet in altitude in one minute
Click to expand...
That would be average 113 mph of downward component. Pretty hard touchdown.

Someone_else said:
Damn! Any airplane can (will) be a glider when the motor stops. If I remember right, a typical airplane will get 10 to 1, but a glider might be 20 to 1. Anyway, my experience with small aircraft is that 10K feet per minute is unreal. One thousand feet per minute was a really disturbing figure when I had to face air currents over a mountain. That was more than my poor airplane could do! Details for those doubters: Carson City, NV, then over Lake Tahoe to California.
Click to expand...
Jets don't glide.

Sounds like SAM, collision with (drone?), struck by meteorite...
For the mystery of lawlessness is already at work; only he who now restrains will do so until he is taken out of the way. Then that lawless one will be revealed whom the Lord will slay with the breath of His mouth and bring to an end by the appearance of His coming; that is, the one whose coming is in accord with the activity of Satan, with all power and signs and false wonders, and with all the deception of wickedness for those who perish, because they did not receive the love of the truth so as to be saved. For this reason God will send upon them a deluding influence so that they will believe what is false, in order that they all may be judged who did not believe the truth, but took pleasure in wickedness.
- 2 Thessalonians 2:7-12
Without prejudice. All rights reserved

Jets do glide, any airplane that is intact and has functioning control surfaces will glide. One glide fast and not far but they do glide.

i'll just suppose those 17 minutes were the longest minutes in those people's lives...and they lived to remember it

lot's of people are not well suited for this type of 'fear', i'll suppose some of those people are Not The Same as they were before those 17 minutes

what an experience, one i never want to experience
don't sell me tomorrow, tell me today

Q: What's the scariest noise in an airplane?
A: A loud bang coming from the engine.

Been there, done that.
Politicians understand sound money in the same way that my dog understands my oscilloscope's delayed trigger.
You must log in or register to reply here.
Share: Twitter Link