Yellen is handcuffed by weak growth, persistent deflationary trends, political gridlock and eight years of market manipulation from which there appears to be no escape. Yet there is one way for Yellen and the Fed to break free of their economic handcuffs, at least in the short run. Yellen’s only escape is to trash the dollar. Investors who see this coming stand to make spectacular gains.

Yellen and the Fed face as many constraints as Harry Houdini in trying to escape a potential collapse of confidence in the U.S. dollar and a possible sovereign debt crisis for the United States. Let’s look at some of the constraints on Yellen — and the possible “tricks” she might use to escape.

The first and most important constraint on Fed policy is that the U.S. economy is dead in the water. Quarterly GDP figures have been volatile over the past three years, with annualized real growth as high as 5% in the third quarter of 2014 and as low as minus 1.2% in the first quarter of 2014. We have not seen persistent growth or a definite trend — until now. Finally, there is a trend, and it’s not a good one.

Annualized real growth for the past four quarters has been 2.0%, 0.9%, 0.8% and 1.2%, for average growth of 1.23%. That’s a trend that will drive the U.S. into a sovereign debt crisis. Deficits are still running over 3% per year and set to skyrocket as baby boomers retire and claim Social Security and Medicare benefits. In effect, the U.S. economy has flat-lined at a level that cannot sustain our deficit spending. Take a look at the chart below… 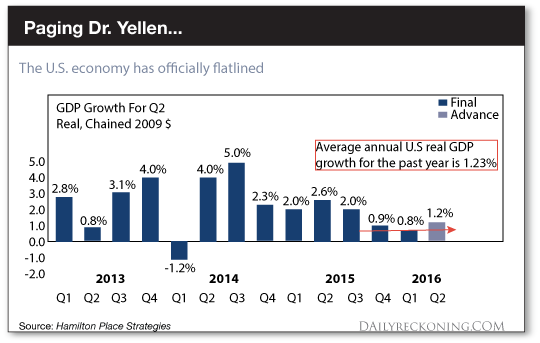 The second constraint on the Fed is a persistent deflationary tendency. The U.S. economy is not yet in outright deflation. But there are powerful deflationary forces arising from demographics, debt, deleveraging and technology. That’s important because the Fed’s government debt problems could be solved with some inflation. (Inflation is not a good deal for you, but the Fed doesn’t care about you. They care about the banks.)

The third constraint on the Fed is political gridlock. The Fed might be able to cause some inflation if they could employ “helicopter money.” The use of helicopter money requires cooperation among the White House, Congress and the Fed.

Basically, the White House and Congress would agree on massive spending programs and larger deficits. The Treasury would finance the deficits by issuing more bonds. Then the Fed would buy the bonds with printed money and promise never to sell the bonds. The debt would stay buried on the Fed’s balance sheet possibly forever if “perpetual” bonds were used.

Unfortunately for the Fed, there’s almost no possibility of helicopter money this year. The U.S. has to get past the presidential election. They need to see which parties control the House and Senate and then try to achieve some consensus on a new spending program. That won’t happen until February 2017 at the earliest. That’s too late to get the U.S. out of its flat-line growth trend this year.

The fourth constraint on the Fed is their desperate race against time. The Fed needs to raise interest rates so they can cut them when recession hits. The problem is that U.S. economy may be in recession before the Fed can normalize interest rates. If the Fed cannot cut rates enough to get the economy out of recession, it could become a permanent depression, as happened in Japan.

Here’s the math. Economists estimate that the Fed has to cut interest rates about 350 basis points (3.5%) to offset the effects of a recession and stimulate a return to growth. Today, the Fed funds rate is 0.25%. The Fed would have to raise rates 3.25% before the next recession in order to cut them 3.5% to fight that recession.

The problem is that the average U.S. economic expansion since 1980 lasted 79 months. The current expansion has already lasted 85 months. In other words, the next recession is already overdue.

If the Fed rushes to raise rates now, they will cause the recession they are trying to avoid. The Fed’s actual policy has been to do nothing and hope for the best, but that strategy is running out of time.

Those are the Fed’s handcuffs — weak growth, persistent deflation, no helicopter money and no ability to cut rates to avoid recession. How can the Fed escape these constraints? How can the Fed get the inflation it needs both to sustain the debt and facilitate rate hikes?


At Currency Wars Alert we use the IMPACT system to forecast changes in exchange rates based on inflation, deflation, interest rates and other central bank policies. The IMPACT system uses intelligence techniques I learned at the CIA for predicting terrorist attacks and other geopolitical shocks.

The Fed’s final destination is inflation — the Fed needs inflation to escape its handcuffs. What are the indications and warnings of inflation from a policy perspective?

There are four ways to get inflation when rate cuts are off the table. These four ways are helicopter money, world money, higher gold prices and currency wars.

As mentioned, we may see helicopter money in 2017 if there’s political will in Congress and the White House. But helicopter money does not guarantee inflation. People and companies on the receiving end of government deficit spending may just save the money or pay down debt instead of spending more themselves. This behavior negates the “multiplier effect.” But that doesn’t mean it won’t be used anyway. The Fed never lets reality get in the way of trying out a bad idea.

The second way to get inflation is for the IMF to issue world money in the form of special drawing rights, SDRs. This may happen in the next global financial crisis, but it won’t happen in the short run. The IMF moves even more slowly than the Fed. SDRs may be issued in sufficient size to cause inflation in 2018. But it’s unlikely to happen before then.

The third way to get inflation is for governments to dictate a higher price for gold, perhaps $3,000 per ounce or higher. The idea is not to reward gold investors. The idea is to devalue the dollar relative to gold so the dollar price of everything else goes up. The U.S. government did this with some success in 1933 when it raised the price of gold by 70% in the middle of the Great Depression.

However, this method is so extreme from a central banker’s perspective that I don’t expect it except in the most desperate circumstances. We may see this in 2019, but it’s unlikely to happen sooner. That doesn’t mean gold won’t go up on its own — it will. It’s just that investors should not expect the government to force the price higher by official action anytime soon.

If we can potentially expect helicopter money in 2017, SDRs in 2018 and a high official gold price in 2019, what can we expect here and now? How can the Fed cause inflation in 2016?

There’s only one way to escape the room right now — currency wars. The Fed can trash the dollar and import inflation in the form of higher import prices. You can bet a cheap dollar will be on the agenda Sept. 4, 2016, when the G-20 Leaders meet in Hangzhou, China.

A cheaper dollar is a complicated play, because it involves other currencies. If the dollar goes down, something else has to go up. It won’t be the Chinese yuan or pounds sterling. China and the U.K. have serious growth problems of their own and need a cheap currency too.

If the dollar goes down, then the three forms of money that have to go up are the yen, the euro and gold.

Jim Rickards
for The Daily Reckoning

Ed. Note: Sign up for your FREE subscription to The Daily Reckoning, and you’ll start receiving regular offers for specific profit opportunities. By taking advantage now, your ensuring that you’ll be financially secure later. Best to start right away.