One should wait a day or two after a Fed day to know if a move is real because the reaction (to the Fed) can be reversed in 24 to 48 hours.
Now, 48 hours later, we know the move wasn’t real, and the sector correction continues.
Last week we noted that gold and silver stocks were materially cheaper than a few weeks ago but that GDX could test $30 or perhaps even the 200-day moving average.
GDX has a confluence of support around $30.
Previous 7-year resistance, the major breakout point lies from $30-$31, and the 38% retracement of the rebound (using closing prices) is at $30.30.
Meanwhile, the 200-day moving average is near $30.
A test of $30, which is 8% downside from here, would mark a perfect 20% correction. 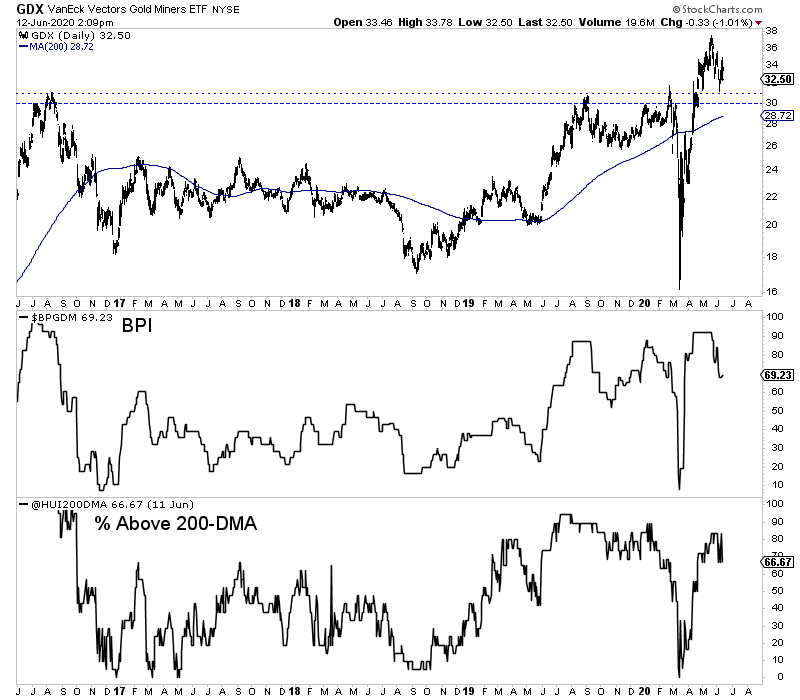 GDX w/ Breadth Indicators
The bullish percentage index (BPI) also argues for more downside. During the first three corrections in 2009, it bottomed at 54%, 58%, and 52%. It currently stands at 69%.
GDXJ, which has been a bit stronger than GDX, has similar downside potential. It is trading at $44 as we penn this and has strong support at $42 and $40, which were previous resistance dating back to 2014.
Turning to the metals, Gold is enduring a tight consolidation while Silver rebounded back to resistance ($18.75/oz) for the fourth time in 10 months.
Gold has support at $1675/oz, and if that fails, then look for a test of $1590 and potentially the 200-day moving average.
Silver, which is trading around $17.50/oz, now has support at $17/oz and $16.65/oz. Regardless of the length and depth of its correction, Silver could be positioning itself to surpass $18.75/oz during the next advance. 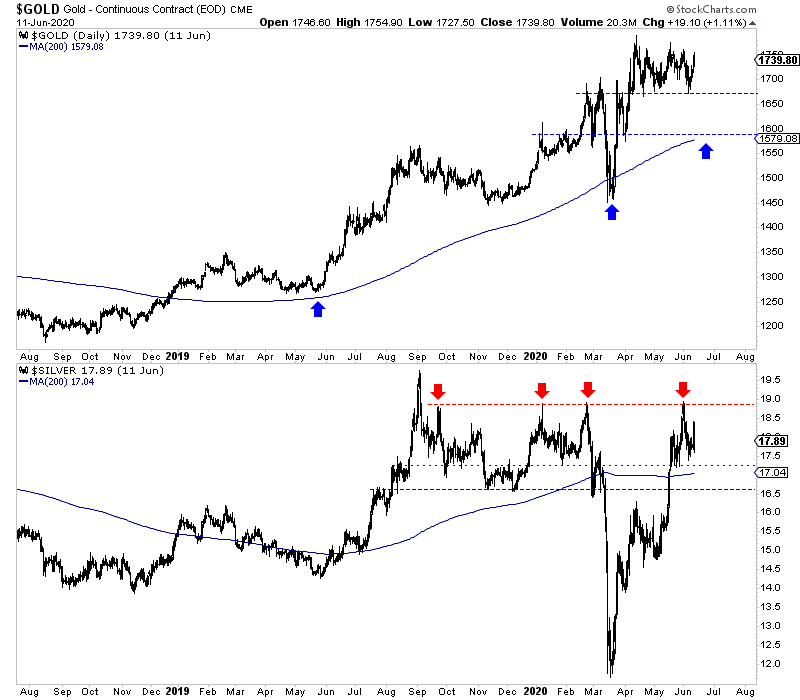 Gold & Silver Daily
On the sentiment front, metals traders are far less bullish than they were earlier this year.
In February, the net speculative position in Gold peaked around 385,000 contracts. As of Tuesday, it was at 243,000 contracts. Silver’s net speculative position peaked at 100,000 contracts in February. Now it is just 50,000 contracts.
The longer this correction lasts, the better it will be for us bulls for two reasons.
It will facilitate better and lower-risk entry points, and it will put the sector in a better position for a healthier and more sustainable next leg higher.
This correction could end up being one of your last chances to buy high-quality juniors with significant upside. Eventually, they will become too expensive.
We continue to focus on identifying and accumulating the stocks that have significant upside potential over the next 12 months. To learn the stocks we own and intend to accumulate that have 3x to 5x potential, consider learning more about our premium service.

One thing this virus/riot situation has underlined that when investing in gold if you don't hold it you don't own it!