“Go get a warrant ... This is private property.” 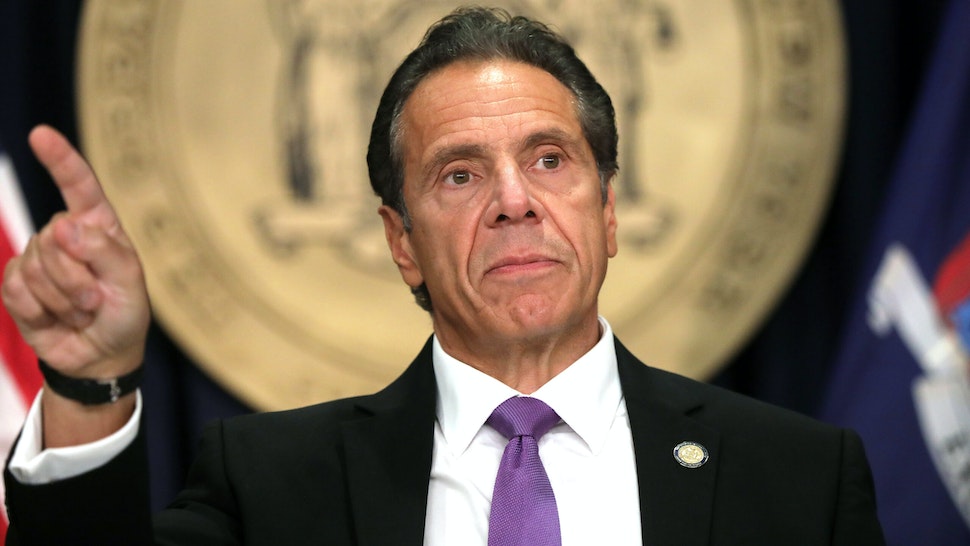 Spencer Platt/Getty Images
It became apparent on Friday night that some business owners in Buffalo, New York, have had enough of the arbitrary coronavirus-related restrictions handed down by Democratic Gov. Andrew Cuomo that are killing their establishments and hurting their employees.
Gathered inside Athletes Unleashed gym in Orchard Park, a number of business owners refused to comply when a health department official and the Erie County Sheriff’s Department entered their facility. The business owners, who taped the interaction, told the health dept. official and the sheriffs to “go get a warrant” and leave their “private property.”

And, to cheers from the business owners, the authorities complied, leaving the gym and the front of the business, video shows.
According to reporting from WBEN, there were about 100 business owners meeting together before they were reported by an anonymous person for exceeding the Cuomo-edict of no more than 10-person gatherings.
At the beginning of the video, one of the men calmly tells the government officials that unlike them, their income does not come from the taxpayer and that they must stay open in order to live.
“I’ve seen clients die because they’ve lost their livelihood,” the man pleads. “I’m asking for [you guys] to have some compassion for the people that have lost everything.”
“We do have compassion for people who’ve lost everything,” the female health dept. officials responds.
“Go get a warrant,” another business owner interjects firmly, “This is private property. … This is private property, [they’re] not wanted here.”
“Do your jobs,” he tells the sheriffs, adding, “Your job is to remove people who are not wanted here.”
“You should all be wearing masks; how come you don’t have masks on?” one of the sheriffs asks. “Don’t worry about my health,” the business owner responds, “My health isn’t your concern.”
“It’s a government mandate,” the sheriff insists. “It’s the law.”
The business owners tell the sheriff it’s “not the law.” The statewide mask mandate is an executive order from Gov. Cuomo and never passed through the legislature.
“You have to leave,” the business owners repeats, “You guys have to leave.” Another man tells them, “You guys need to leave because right now, you’re trespassing without a warrant; you need to leave.”
“[Mass] civil disobedience starts now,” someone else shouts.
“You don’t get to violate the Constitution,” the officials are told. “You don’t circumvent or subvert the Constitution.”
Chants of “Get out” and “We will not comply” erupted from the business owners as the health dept. worker and the sheriffs were ushered off the property.
Before they are cheered off the premises, it was made clear that the business owners were “reported” by an “anonymous” person, according to the health dept. worker, who insisted it was fine for the complaint to be anonymous.
The business owners, reports WBEN, were, ironically, meeting to discuss new COVID-related restrictions.
“Tim Walton attended the meeting that began at around 7pm Friday and tells WBEN there were more than 100 people attending the meeting inside the gym,” the report said. “In a press release and blog post, Walton says the Erie County Sheriff’s Department and Health Department entered the facility and confronted the gathering, telling them they were in violation of the limit to mass gatherings of no more than ten.”
“We’re gathering information and will have more to say at our press conference on Monday,” said Erie County Health Department spokesperson Kara Kane.
“Our health department is out there enforcing the rules,” Erie County Executive Mark Poloncarz responded to the video.
WATCH:

The Daily Wire is one of America’s fastest-growing conservative media companies and counter-cultural outlets for news, opinion, and entertainment. Get inside access to The Daily Wire by becoming a member.

We need more of this.
We need to tell them to go pound sand !
COSTCO is now on the NAZI team of mask mandates & I had a helluva fight with them 3 days ago. With queer cunt brown's new mandate, this is the first time that they did not give in ! I told them I would pass out & I might die. They couldn't care less !!
Lost in Orygun.

There is gonna be a spark somewheres.

For the left - it was George Floyd.
For the right- ???
For God so Loved the World that He gave His ONLY Son - so that whosoever would believe in Him He would give them eternal life.

"The abandonment of the gold standard made it possible for the welfare statists to use the banking system as a means to an unlimited expansion of credit. In the absence of the gold standard, there is no way to protect savings from confiscation through inflation. There is no safe store of value. Deficit spending is simply a scheme for the hidden confiscation of wealth. Gold stands in the way of this insidious process. It stands as a protector of property rights. If one grasps this, one has no difficulty in understanding the statists' antagonism toward the gold standard.

Gold is a currency. It is still, by all evidence, a premier currency, that no fiat currency, including the dollar, can match. Gold still represents the ultimate form of payment in the world. Fiat money in extremis is accepted by nobody. Gold is always accepted."
-Alan Greenspan
You must log in or register to reply here.
Share: Twitter Link