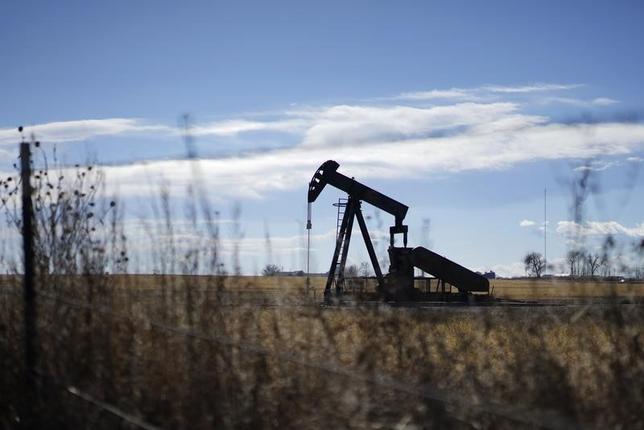 U.S. oil stumbled below $30 for the first time in 12 years to levels that threaten the survival of many U.S. shale firms, spur more belt-tightening by oil majors and spell more pain for crude-producing nations and regions.

A seven-day losing streak fueled by concerns about a continued supply glut and fragile demand from China, the world's No. 2 consumer, wiped out almost a fifth of crude prices CLc1 this year and 70 percent since mid-2014.

Traders have all but given up attempting to predict where the new-year rout will end, with momentum-driven dealing and overwhelmingly bearish sentiment engulfing the market. Some analysts warned of $20 a barrel; Standard Chartered said fund selling may not relent until it reaches $10.

And more of the world's biggest energy companies are conceding that it may be many years before prices recover. On Tuesday, U.S. crude futures traded below $50 through 2021.

British oil and gas giant BP Plc (BP.L) said on Tuesday it would slash 5 percent of its workforce in the face of the continued slump while Brazil's state oil firm Petrobras (PETR4.SA) cut its investment plan for the third time in six months.

The latest cuts add to the hundreds of thousands of job lost and billions of dollars spending cuts throughout crude's 18-month slide from levels above $100 a barrel in the summer of 2014, a collapse that has run far longer and deeper than originally expected, reaching crisis point for some.

For Russia, which relies on energy for about half its budget revenues and 40 percent of exports, $30-a-barrel oil could wipe out in just over a year the nation's rainy day funds amassed during bull energy markets and blow a hole in its budget.

Even Saudi Arabia, whose policy of maintaining output to defend its market share even as prices slide has been blamed, together with the resilience of U.S. shale producers, for the persistence of the global supply glut, is feeling the squeeze.

In its 2016 budget unveiled late last month, Riyadh announced a series of spending cuts and reduction in subsidies as oil revenues shrink.

But with major U.S. energy lender Wells Fargo estimating that sustained prices below $40 per barrel, let alone $30, are too low for U.S. shale producers to survive in the longer run, the stakes are exceptionally high for the young industry that turned the United States into a leading oil and gas producer.

The rout has already pushed dozens of small firms into bankruptcy or turned them into "zombies" firms that barely manage to pay their bills and service debts, but do not earn enough to ensure sustained production and revenues ahead.[L1N14R2JA]

Stocks of U.S. energy companies lost more than 9 percent in the past nine trading days and the sector is expected to report a 70 percent annual drop in earnings per share for the fourth quarter, according to Thomson Reuters data.

There are few signs suggesting any near-term relief. The U.S. Energy Information Administration predicted on Tuesday that already heavily swollen global oil stockpiles would continue rising until the second half of next year.

The prospect of a protracted slump has fueled expectations of a flurry of asset sales deals that could be possibly financed by private equity or hedge fund investors and law firms and banks have been beefing up their restructuring teams.

The latest slide, however, quashed hopes that the market may have already found its bottom and private equity investors are expected to hold off with buying any assets with action expected to shift to bankruptcy courts.

The U.S. West Texas Intermediate crude (WTI) CLc1 benchmark briefly touched a low of $29.93, which was last seen in December 2003.

“With WTI now trading below $30, people are getting their minds wrapped around the lower-for-longer price scenario and … management teams and sponsors are starting to become resigned to the likelihood of an in-court solution,” said Matthew Hart, who leads the restructuring practice at Intrepid Partners.

The latest plunge has also deepened the gap between U.S. states such as Alaska, Oklahoma, North Dakota, Louisiana and New Mexico, which depend on production taxes to fund education and health care and the rest of the country, which has benefited from low gasoline prices.

There are winners of the oil rout too.

Cheap gasoline and low heating costs have produced a windfall for the majority of U.S. consumers, which with a delay begins to show up in discretionary spending and savings.

The U.S. auto industry is also racking up record sales and profits, largely due to the resurgent popularity of trucks and sport utility vehicles fueled by gasoline prices at multiyear lows.

And some investors are still looking at the latest slide as a potential opportunity.

“It’s a wild cycle, but it’s so hard to predict where the bottom is,” said Gary Bradshaw, portfolio manager at the $1.9 billion Hodges Small Cap Fund. He says his firm has been buying small-cap natural gas firms in anticipation that the stocks will rebound soon, particularly if global events cause a quick tightening in oil supply.

“I think we’ll have a heck of a snap-back rally and crude will eventually, my guess, rebound to around $55 a barrel," he said. "We’re buying stocks thinking they’re awful close to getting washed out.”

Traders have all but given up attempting to predict where the new-year rout will end, with momentum-driven dealing and overwhelmingly bearish sentiment engulfing the market. Some analysts warned of $20 a barrel; Standard Chartered said fund selling may not relent until it reaches $10.

So just what funds are selling & why? Is it redemption outflows, risk off, momentum or margin calls.... or are they just starved for liquidity, & selling oil is one of the last standing mechanisms capable of providing instant liquidity???

The markets in general are getting hammered today too
'I pledge allegiance to the flag of the United States of America; and to the Republic, for which it stands, one nation under God, indivisible, with liberty and justice for all!'
(except in California, New York, New Jersey, Michigan, Illinois, Massachusetts, parts of Oregon and WA state, and all of Washington DC)

It's like the Iran/Iraq war market all over again plus the USA is exporting now too. Not to mention newer fuel efficient vehicles and new oil producing technology. There is over capacity everywhere except in my bank account and underwear.
Share:
Twitter Share Link