Once again, GIM on the leading edge of this:

We have already been bantering about this for a period now,
and here it comes from the 'normal outlets'


The Treasury Market Raises Its Inflation Outlook
By James PicernoMarket OverviewMar 02, 2016 06:55AM ET

The US Treasury market’s implied inflation forecast has surged in recent days, albeit after reaching unusually low levels last month. Nonetheless, the rollercoaster of revising expectations rolls on, and this time there’s an upside bias bubbling. The spread between the nominal 10-Year yield and its inflation-indexed counterpart reached 1.48% yesterday (Mar. 1), based on daily data from Treasury.gov. That’s still a low rate relative to the roughly 1.5%-2.5% range in recent years. But the latest pop marks a sharp increase from mid-February, when the market’s inflation forecast at one point dipped to 1.18%.

The upward bias of late looks reasonable in the wake of last week’s January report on personal income and spending, which revealed a firmer inflation trend. The personal consumption expenditures (PCE) price index increased 1.3% for the year through January, the strongest annual gain since Oct. 2014. Meanwhile, the Fed’s preferred inflation benchmark—core PCE, which excludes food and energy—ticked up to a 1.7% year-over-year increase, which marks the biggest advance since July 2014. 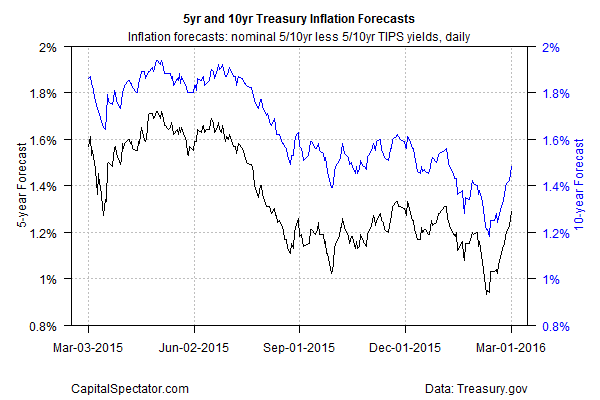 5- and 10-Yr Treasury Inflation Forecasts
The upward repricing of inflation expectations can be seen as a correction after weeks of anticipating weaker economic growth in the equity and bond markets. But the January macro profile suggests that the US macro trend is stronger than the previously assumed. Slow growth continues to be the working assumption for the near-term future, but the case is still unconvincing for arguing that a new recession has started, or is about to start. Indeed, the Atlanta Fed’s GDPNow model is currently projecting a 1.9% gain (seasonally adjusted annual rate) for US output in this year’s first quarter (as of Mar. 1). That’s a modest increase, but it’s conspicuously above the 1.0% GDP rise in last year’s fourth quarter.

Perhaps, then, it’s no surprise that the market is again repricing yields to reflect expectations for a modest growth trend. The 2-Year Treasury yield, which is considered the most sensitive to rate expectations, has rebounded to 0.85% as of yesterday (Mar. 1)—the highest since late-January. 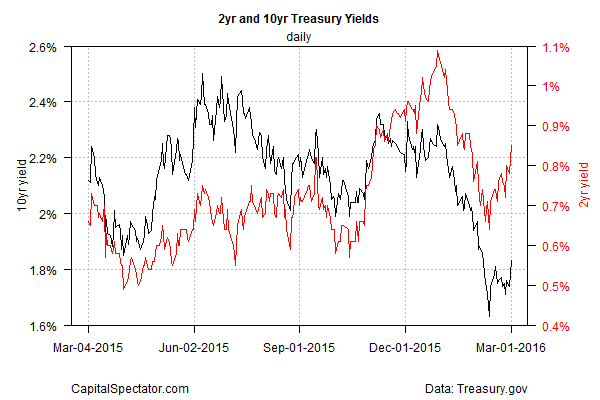 2-Yr And 10-Yr Treasury Yields
There’s still a consensus view that the Federal Reserve will not raise interest rates at its monetary policy meeting that’s scheduled for Mar. 15-16. Fed fund futures are pricing in a 94% probability of no change for this month’s FOMC meeting, based on CME data as of yesterday.

Yet by some accounts, the numbers are strong enough to rationalize a rate hike this month. For example, here’s how Tom Porcelli, chief US economist at RBC Capital Markets, sizes up the current macro situation via a Feb. 29 Bloomberg story:

The bigger-than-expected jump in January’s core PCE index to 1.7 percent over the previous year underscores the appropriateness of delivering another interest rate hike, according to Porcelli. The Federal Reserve’s preferred gauge of inflation is now running hotter than what the median policymaker projected it would be at by year’s end.
Meanwhile, a jobless rate of 4.9 percent rests in the middle of the range of what the Federal Open Market Committee considers to be full employment.
“Note that a Fed forecast for core PCE prices to hit 1.6 percent by the end of 2016 and for the unemployment rate to be at 4.7 percent was justification enough to usher in a baseline view of four rates hikes this year,” wrote Porcelli, referencing the projections monetary policymakers made in December. “Not only has the trajectory toward those explicit goals not changed, it has accelerated!”

The futures market doesn’t necessarily agree, at least not yet. The question is whether there’s another attitude adjustment lurking in the next round of data releases, starting with ADP’s February report on private payrolls that’s due later this morning.

The main event, of course, is Friday’s official employment estimate for February via the US Labor Department. Econoday.com’s consensus forecast sees private payrolls rising by 183,000—a decent improvement over January’s sluggish increase of just 158,000. Is that enough to convince the Fed to hike rates later this month? Probably not. But unless the upcoming numbers are terrible, Mr. Market seems inclined to keep an open mind about what happens next.

That’s hardly the basis for expecting rate hikes, but sentiment has clearly made a partial recovery after last month’s despair. In fact, San Francisco Fed President John Williams tells the Financial Times today that the US economy is poised to “power ahead,” explaining that “I don’t see any signs in the data of any slackening of domestic demand.” Will this week’s February employment numbers support his optimistic view?