One of the Biggest Money Printers, the BoJ, Stopped Printing Money

One of the Biggest Money Printers, the BoJ, Stopped Printing Money​

All eyes are on the Fed, which will follow. ECB also getting nervous. Other central banks are way ahead.​

By Wolf Richter for WOLF STREET.​

The Bank of Japan is one of the top three QE monsters in terms of the absolute amount of assets it purchased. The Fed and the ECB round out the trio. The BoJ started QE over 20 years ago, and went hog wild under Abenomics, which became the economic religion of Japan in 2013. But the era of Prime Minister Shinzo Abe ended in September 2020, and Abenomics is now finished. What’s left of it is that the BoJ now holds about half of the huge pile of the central government’s debt.
But QE has ended. The BoJ’s overall assets stopped growing, and its holdings of government bonds have started to decline.
As of the BoJ’s balance sheet dated September 30, released on Thursday, total assets declined to a still monstrous ¥724 trillion ($6.4 trillion), below where it had been in May 2021: 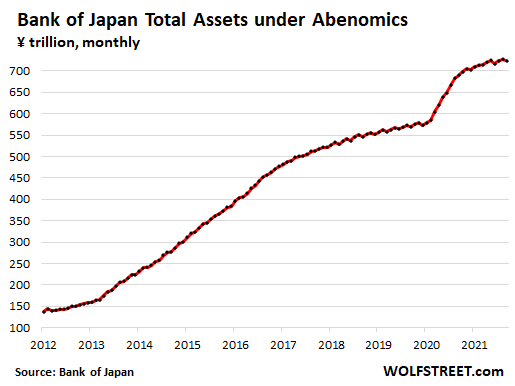 much more at the link,
and the comments are worth a read 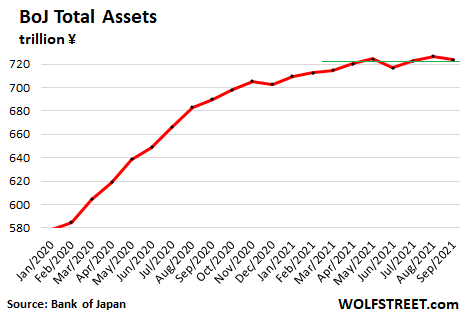 One of the Biggest Money Printers, the BoJ, Stopped Printing Money

All eyes are on the Fed, which will follow. ECB also getting nervous. Other central banks are way ahead.
wolfstreet.com
Sound of Silence

Is Japan the 'test' market?

Quit printing money out of thin air and we get to observe what happens?
Disclaimer: this post and the subject matter and contents thereof - text, media, or otherwise - do not necessarily reflect the views of the GIM2 administration.

Odd. I had noticed the Yen is plummeting. That seems to be at odds with this news.

"Education consists mainly of what we have unlearned." - Mark Twain
"Whenever you find Yourself on the side of the Majority; It is time to Pause and Reflect." - M. Twain
"Torn between the political comfort zone of the official story & logic, pushing me into the uncertain and lonely future.." - Andrei Nekrasov

What's to prevent them from printing money again?
"How do you explain to idiots that every freedom we have was won by the blood of brave soldiers through history. The idiots think Papa government is going to take care of them. Pick up a darn history book."
-Avalon

Japs are gonna get it up the butt when the banks start squeezing. The pressure will be just enough to get juice out of a grain of rice, but hopefully not enough to turn them back into radicals.
You must log in or register to reply here.
Share:
Twitter Share Link