Our Braveheart Moment
It's not about one man. It's about freedom. 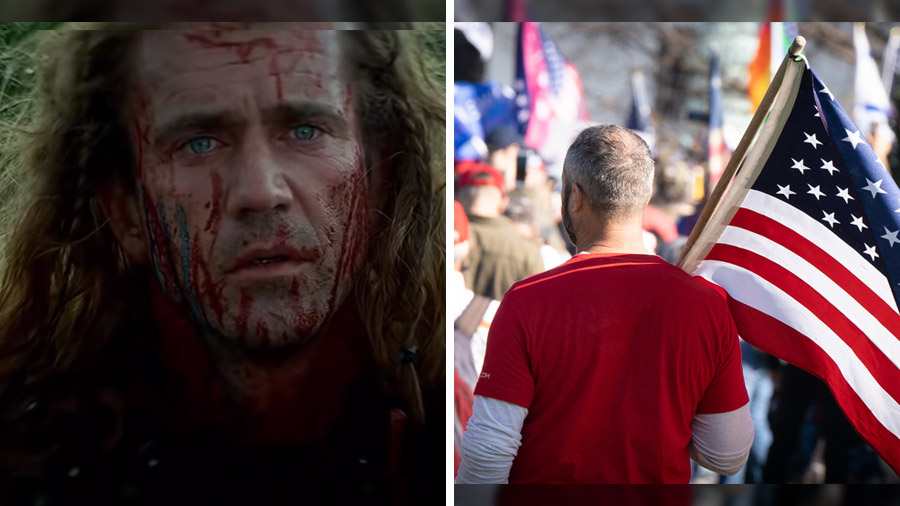 
Al Perrotta
Perhaps the most gut-wrenching scene in Braveheart occurs when William Wallace discovers he has been betrayed by a man he thought of as a friend. The heartbreak on Wallace’s face is far more terrible than the torture Wallace would later suffer. You expect brutality from your enemies, but not from your friends.
Robert the Bruce had done what was politically expedient at the moment. Betraying Wallace — and his own heart — increased his chances of becoming Scotland’s king.
Right now, a lot of people are doing what is political expedient to rid themselves of a brash, unorthodox, charismatic, fearless leader who was overturning the status quo. We know his enemies. They have been swinging swords at his head, clubs at his knees, using every means, legal and illegal, to take him out for five years. Right now, they are engaged in an extremely brazen effort to steal an election from him.
Oh, don’t give me your “baseless allegations” garbage. You know it, and I know it. You saw it happen with your own eyes. You know it in your gut. And if you’ve closed your eyes to the mounting evidence, failed to research it yourself, failed to be honest with yourself, that’s on you.
And that is the heartbreaking part. For the temporary political expediency of seeing Orange Man gone, otherwise good people are turning away from the fight for our country.
Abandoning Their Neighbors
They are leaving bloodied on the streets those attacked Saturday in Washington, D.C., by Antifa and BLM armies prowling the streets hunting MAGA supporters.
They are turning away from the two Wayne County certification members who voted against certification, only to be doxed by their colleagues. One revealed the schools his GOP colleague’s kids went to after calling her a racist. He endangered her kids.
They are turning away from the rule of law, rules of fairness, rules of equal protection under the law. Away from the things that made America the envy of the world, and the inspiration for millions “yearning to be free.”
Please Support The Stream: Equipping Christians to Think Clearly About the Political, Economic and Moral Issues of Our Day.
They are silent as conservative voices are silenced, conservative websites de-platformed, and legitimate news stories are censored.
They are silent as members of Congress and media figures call for hit lists on Trump supporters.
We look on them as Wallace looked on Robert the Bruce. If we look closer, will we, too, see shame?
We Know There’s a Target on Our Back
We know there’s a target on our back. That for many, supporting Trump is a career death sentence. And for some, like Bernell Trammell, a literal death sentence.
We know that the dukes and earls and lords of the Swamp would be happy to see us routed on the field, even at the hands of a foreign enemy, even by betraying our founding principles. As long as their own realms are protected.
We know the odds are long, the flaming arrows and charging cavalries come at us from all sides.
But know this: The shield of faith shall extinguish the flaming arrows. While others trust their cavalries, we will trust in the name of the Lord. The fight is far from over. The fight for a free and fair election is right.
Robert the Bruce felt shame for his betrayal. That turned into bravery and support for the cause of liberty. We pray this will happen in America.
It’s About the Nation
Because this is not about one man. It’s about one nation conceived in liberty. It’s about millions of Americans, mocked and forgotten, demanding accountability. It’s about millions of Americans not yet born who deserve to know “liberty and justice for all.”
Yet, even if our neighbors do not join the battle, if deceit is to carry the day, if we are to go down, if we are to be figuratively dismembered, if we are to be alone, at least we will leave with one word on our lips: “Freedom.”

Al Perrotta is the Managing Editor of The Stream and co-author, with @JZmirak, of The Politically Incorrect Guide to Immigration. You can follow him at @StreamingAl. And if you aren’t already, please follow The Stream at @Streamdotorg.

EO 11110 character is fiction and for entertainment purposes only - and should not be construed as any real human's opinion. The EO character is EXACTLY like any other fiction character - like those in movies, tv shows, books, poems, songs. Pure fiction and pure entertainment - nothing else
You must log in or register to reply here.
Share: Twitter Link