As per always "One thing is for sure: The city doesn’t expect police costs to decrease in fiscal year 2019, Budget Director Anna Adams said. "
E

I would prefer it as "demands death penalty for ALL police killers " because I don't believe in that "some are more equal than others" hype.

Amazing how the liberal media in the US gives these crimes against the people and the constitution so little coverage, America needs to wake the fuck up and do something, shut your tvs off for a week

searcher said:
US Border Patrol agent in Texas is suspected of murdering four women and abducting a fifth, authorities say

Click to expand...
I think he should talk with this cop, she has a great way of finding excuses ! They are both in Texas, so it should be easy !

“Dallas Police Chief Renee Hall said Guyger had left work on Thursday night and entered what "she believed to be her apartment," when she encountered Jean and fatally shot him. It is unclear if the two had any interaction before the shooting, police said.“
We are called Elders for a reason. When you grow old & have old, well healed scars (mentally & physically), scabs & bleeding sores, all at the same time, then you are mature enough to be referred to as an Elder. Fortunately, for this forum, there are a lot of us here.

The kid was a POS, BUT he posed no danger at the time the video shooting occurred. Pepper spray would have worked just fine.
The shooting was not justified. Hang the cop !
We are called Elders for a reason. When you grow old & have old, well healed scars (mentally & physically), scabs & bleeding sores, all at the same time, then you are mature enough to be referred to as an Elder. Fortunately, for this forum, there are a lot of us here.

https://www.dailymail.co.uk/news/ar...murdering-black-teenager-Laquan-McDonald.html
Click to expand...
shot 16 times? The problem is that LEOs are using 9mm rounds. It usually takes more than one or two shots with a 9 to drop and suspect. LEOs should all be issued SW 500 revolvers which use a .50 cal round. One shot is all that's needed to down the perp.
"Maintain Your Integrity"
-Lt. General Michael T. Flynn


Streamed live 48 minutes ago
https://www.cbsnews.com/news/jason-va...
Click to expand...
I guess this won't be used as a reason for a chimpout in Chicongo this weekend
"Maintain Your Integrity"
-Lt. General Michael T. Flynn

Here is a meme I made for Justice I sent on a tweet..

Legalize cannabis
The primary purpose of the Constitution is to Limit Government
Fiat money is the root that feeds Evil
A Change is Gonna Come!
Where We GO 1 We Go All

That is sad all the way around.
President Trump said — "They’re not after me. They’re after you. I’m just in their way."

searcher said:
Shocking moment cops take down a knife-wielding man, 68, threatening to slice a woman's throat in an LA restaurant by shooting him with rubber bullets
https://www.dailymail.co.uk/news/ar...-wielding-man-68-shooting-rubber-bullets.html
Click to expand...
Lead bullets would have been cheaper, and less chance of a re-occurrence. Jus' Sayin'
President Trump said — "They’re not after me. They’re after you. I’m just in their way."

Land of the free: Cops raid journalist's home and kidnap him after he refuses to name source for cop-damning article 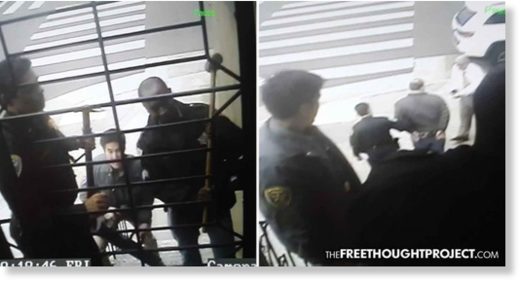 Despite multiple laws on the books protecting journalists from revealing their sources, a journalist in California was raided after refusing to reveal his.

In the land of the free, journalists are now being raided by SWAT teams in an effort to find out their sources and this is in spite of the law protecting journalists from this very act. Freelance journalist Bryan Carmody just fell victim to the police state in California as multiple San Francisco cops with sledge hammers and weapons began breaking down his door last week in an effort to find out his source for a leaked police report.

As the Society for Professional Journalists points out, California's Shield Law protects journalists from being held in contempt for refusing to disclose their sources' identities and other unpublished/unaired information obtained during the news gathering process (California Constitution, Article I, § 2(b); California Evidence Code § 1070(a)). California Penal Code section 1524(g) provides that "no warrant shall issue" for any item protected by the Shield Law.

Despite this protection under the law, police still raided Carmody's home.

According to a report from NPR:

The raids on Carmody's home and office are the latest in a series of events concerning the death of San Francisco public defender Jeff Adachi in February, at age 59.

Within hours of Adachi's collapsing in a San Franscisco apartment, details from a leaked police investigation into his death were already showing up in news reports, according to the San Francisco Chronicle.

A number of the details in the police report were salacious, suggesting that perhaps one or more members of the police department were trying to tarnish the reputation of Adachi, who was known as a police watchdog and fierce advocate for criminal justice reform. In San Francisco, a public defender is an elected position.​
After Carmody sold the report to several outlets, it showed up everywhere and this likely infuriated the police department.

"There were leaks happening all over the place," Carmody recalled to the Los Angeles Times.

Due to the nature of the report painting police in a negative light and hurting their image, the raid could've been retaliatory in nature. Indeed, since it was in direct violation of California law, it appears as such.

According to Carmody, before the raid, two cops came to his home to demand he tell them the source of his report. However, knowing full well that he did not have to, Carmody politely refused. Two weeks later, a team of cops showed up.

Carmody recalls the officers showing up to his home, who began smashing in his door with a sledge hammer and a battering ram, without knocking. To avoid having the front of his home demolished by the raid, Carmody opened the door.


​
"I don't think it was right to break my door down," he said in an interview. "I'm one of the original independent media companies in San Francisco. This is outrageous."

When the police came into his home, they kidnapped Carmody for over six hours, holding him in handcuffs.

While they held Carmody captive, the officers tore his home apart, confiscating all of his computers and equipment.

"It's designed to intimidate," Carmody's lawyer, Thomas Burke, told The Associated Press. "It's essentially the confiscation of a newsroom."

Naturally, the police are standing by the Stasi-style raid of a journalist's home, and referred to Carmody's detainment and theft of his equipment as part of an "investigation."

David Stevenson, a spokesman for the San Francisco police, told the Chronicle that the "search warrant executed today was granted by a judge and conducted as part of a criminal investigation into the leak of the Adachi police report." He called it "one step in the process of investigating a potential case of obstruction of justice along with the illegal distribution of a confidential police report."

As NPR notes, Burke said that normally journalists would receive a subpoena, and then get a lawyer to ensure the proper protections. "So much information has nothing to do with the purpose of their investigation," he said. "If you are looking for one piece of information, that's why you issue a subpoena."

But this did not happen and instead, police carried out an extremely disturbing raid on a journalist.

Luckily, because Carmody had committed no crime, he was eventually released, but not before the cops took the report, stole his property, and damaged his home. This is what journalism looks like in 2019.
Orthodox Jedi
Make mine a vodka and vicodin latte.
You must log in or register to reply here.
Share: Twitter Link