Quite the little shindig, 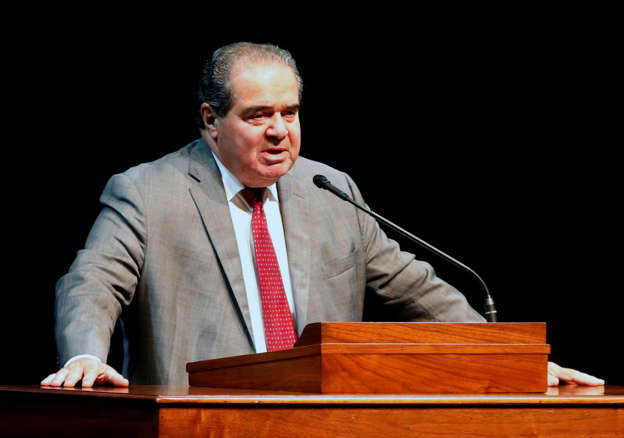 When Supreme Court Justice Antonin Scalia died 11 days ago at a West Texas ranch, he was among high-ranking members of an exclusive fraternity for hunters called the International Order of St. Hubertus, an Austrian society that dates back to the 1600s.

After Scalia’s death Feb. 13, the names of the 35 other guests at the remote resort, along with details about Scalia’s connection to the hunters, have remained largely unknown. A review of public records shows that some of the men who were with Scalia at the ranch are connected through the International Order of St. Hubertus, whose members gathered at least once before at the same ranch for a celebratory weekend.

Members of the worldwide, male-only society wear dark-green robes emblazoned with a large cross and the motto “Deum Diligite Animalia Diligentes,” which means “Honoring God by honoring His creatures,” according to the group’s website. Some hold titles, such as Grand Master, Prior and Knight Grand Officer. The Order’s name is in honor of Hubert, the patron saint of hunters and fishermen.

Cibolo Creek Ranch owner John Poindexter and C. Allen Foster, a prominent Washington lawyer who traveled to the ranch with Scalia by private plane, hold leadership positions within the Order. It is unclear what, if any, official association Scalia had with the group.

“There is nothing I can add to your observation that among my many guests at Cibolo Creek Ranch over the years some members of the International Order of St. Hubertus have been numbered,” Poindexter said in an email. “I am aware of no connection between that organization and Justice Scalia.”

An attorney for the Scalia family did not respond to requests for comment for this article.

Two other private planes that landed at the ranch for the weekend are linked to two men who have held leadership positions with the Texas chapter of the Order, according to a review of state business filings and flight records from the airport.

After Scalia’s death, Poindexter told reporters that he met Scalia at a “sports group” gathering in Washington. The U.S. chapter of the International Order of St. Hubertus lists a suite on M Street NW in the District as its headquarters, although the address is only a mailbox in a United Parcel Service store.

The International Order of St. Hubertus, according to its website, is a “true knightly order in the historical tradition.” In 1695, Count Franz Anton von Sporck founded the society in Bohemia, which is in modern-day Czech Republic.

The group’s Grand Master is “His Imperial Highness Istvan von Habsburg-Lothringen, Archduke of Austria,” according to the Order’s website. The next gathering for “Ordensbrothers” and guests is an “investiture” March 10 in Charleston, S.C.

The society’s U.S. chapter launched in 1966 at the famous Bohemian Club in San Francisco, which is associated with the all-male Bohemian Grove — one of the most well-known secret societies in the country.

In 2010, Poindexter hosted a group of 53 members of the Houston chapter of the International Order of St. Hubertus at the Cibolo Creek Ranch, according to a Houston society publication. A number of members from Mexico were also part of the ranch festivities that included “three days of organized shoots and ‘gala’ lunches and dinners.”

Poindexter told CultureMap Houston that some of the guests dressed in “traditional European shooting attire for the boxed bird shoot competition” and for the shooting of pheasants and chukar, a type of partridge.

For the hunting weekend earlier this month, Poindexter told The Washington Post that Scalia traveled to Houston with his friend and U.S. marshals, who provide security for Supreme Court justices. The Post obtained a Presidio County Sheriff’s Office report that named Foster as Scalia’s close friend on the trip.

Sheriff Danny Dominguez confirmed that a photograph of Washington lawyer C. Allen Foster is the same man he interviewed at the ranch the day of Scalia’s death.

From Houston, Scalia and Foster chartered a plane without the marshals to the Cibolo Creek Ranch airstrip. In a statement after Scalia died, the U.S. Marshals Service said that Scalia had declined a security detail while at the ranch.

The friend, Louisiana-born Foster, is a lawyer with the Washington firm Whiteford, Taylor & Preston. He is also known for his passion for hunting and is a former spokesman for the hunting group Safari Club.

In 2006, Foster was featured in The Post when he celebrated his 65th birthday with a six-day celebration in the Czech Republic. He flew his family and 40 Washington friends there to stay in Moravia’s Zidlochovice, a baroque castle and hunting park. The birthday bash included “tours of the Czech countryside, wine tasting, wild boar and mouflon (wild sheep) hunts, classic dance instruction and a masked costume ball.”

A secretary at Foster’s law firm said he is traveling in Argentina. The firm’s director of marketing, Mindee L. Mosher, said Foster was traveling and she would try to contact him. A woman answering a phone associated with Foster hung up when asked for comment.

Planes owned by Wallace “Happy” Rogers III and the company of A.J. Lewis III left from San Antonio and arrived at the ranch just after noon Feb. 12. The planes departed the ranch about 30 minutes apart Feb. 14, according to flight records provided to The Post by FlightAware.

Rogers and Lewis have both served as prior officers in the Texas chapter of the International Order of St. Hubertus, according to Texas business records. Rogers spoke to a Post reporter briefly on the phone and confirmed that he was at the ranch the weekend of Scalia’s death, He declined to comment further.

Lewis did not respond to several attempts for comment.

The Presidio County Sheriff’s Office released an incident report to The Post on Tuesday that revealed Foster’s name as Scalia’s traveling companion and provided details about the discovery of his body.

Scalia “said that he was tired and was going to his room for the night,” the sheriff wrote in his report.

When Scalia didn’t show up for breakfast that morning, Poindexter knocked on his door and eventually went in and found the Justice dead in his bed, Poindexter said.

Law enforcement officials told The Post that they had no knowledge of the International Order of St. Hubertus or its connection to Poindexter and ranch guests. The officials said the FBI had declined to investigate Scalia’s death when they were told by the marshals that he died from natural causes.

Alice Crites in Washington and Eva Ruth Moravec in San Antonio contributed to this report.

"The society’s U.S. chapter launched in 1966 at the famous Bohemian Club in San Francisco, which is associated with the all-male Bohemian Grove..."

That's all I needed to know.

Aurumag said:
"The society’s U.S. chapter launched in 1966 at the famous Bohemian Club in San Francisco, which is associated with the all-male Bohemian Grove..."

That's all I needed to know.

Scalia was one of the elites who spent his last weekend hanging and hunting with his elite homies.
Click to expand...

What's all you need to know? This isn't jumping, it's leaping, hurling, no, rocketing to dumb conclusions.