Raccoon Was Once a Thanksgiving Feast Fit for a President

Raccoon Was Once a Thanksgiving Feast Fit for a President​

Raccoon Was Once a Thanksgiving Feast Fit for a President

Calvin Coolidge refused to cook the raccoon sent to him, but the critter was a beloved staple for many Americans.

Calvin Coolidge refused to cook the raccoon sent to him, but the critter was a beloved staple for many Americans.​ 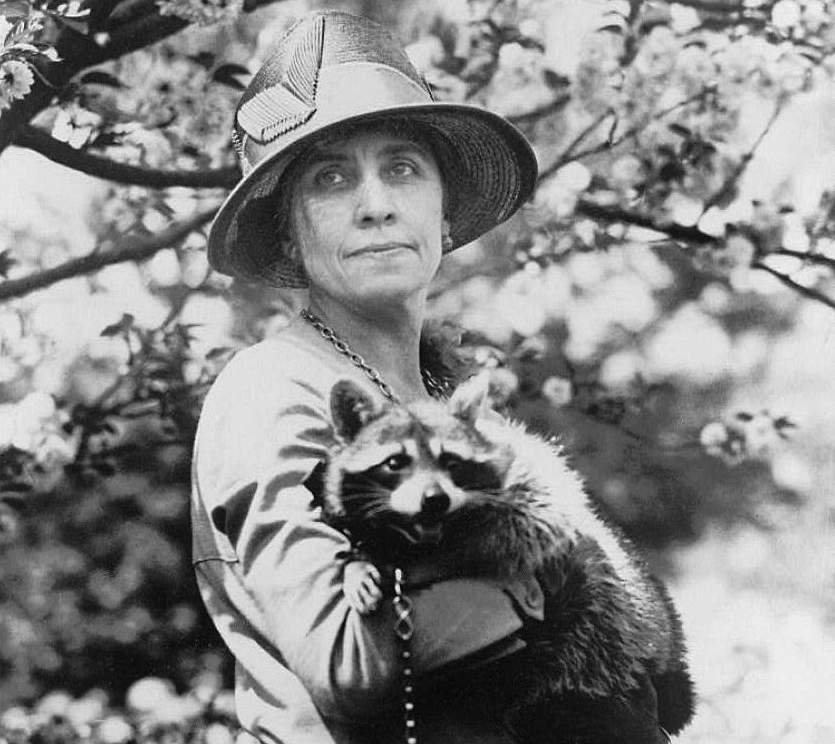 First Lady Grace Coolidge and Rebecca, the raccoon she and her family kept as a pet. Photo from the Library of Congress /Wikimedia Commons / Public Domain.

Turkey, ham, and even a bit of venison or elk would pass muster on most modern Thanksgiving tables. But a century ago, many diners would have been just as happy to see some raccoon sitting next to the gravy boat.

As Luke Fater reports for Atlas Obscura, Native Americans and early American settlers relied on small game like raccoon and squirrels to supplement their diets. In the American South especially, raccoons were an important staple for enslaved individuals.

“After they’d finish their workday, they were permitted to hunt in the middle of the night to get some extra protein in their diet,” Hank Shaw, author of Hunt, Gather, Cook, tells Fater.

Archaeological digs show that enslaved people even stewed whole raccoons in a manner similar to a West African cooking technique.

Over time, raccoon became an essential food for settlers moving West, as well as underprivileged white and African-American people living across the country. The meat was so prevalent that Mark Twain included it on a famous list of American foods he missed while traveling in Europe during the 1870s.

At the turn of the 20th century, raccoon, possum and squirrel had become so popular that they were sold in city game markets and featured on the menus of many urban restaurants.

And during the 1920s, a craze for raccoon fur coats among college men, middle class African-Americans and even movie stars led to a boom in raccoon trapping and hunting—a trend that likely made the meat more readily available.

In November 1926, Vinnie Joyce of Nitta Yuma, Mississippi, sent President Calvin Coolidge an unsolicited plump raccoon for his Thanksgiving dinner. The gift wasn’t particularly notable or funny: In fact, Christopher Klein writes for History.com, the Washington Evening Star reported that the oddest aspect of the story was the first family’s decision to let the critter—which the paper described as tasting like a combination of chicken and suckling pig—live.

Instead of stewing the animal or releasing it into the wild, the Coolidges adopted the raccoon as a family pet. The family named the animal Rebecca and even gave her a nice collar at Christmas. (The president’s son John received his own trendy raccoon coat that same year.)

Rebecca was an essential member of the Coolidge administration for the remainder of the president’s term. She enjoyed walks on the lawn, attended the White House’s annual Easter egg roll and even accompanied the first family on a vacation to the Black Hills of South Dakota. Known to make daring breaks from her Washington, D.C. home, Rebecca was caught rummaging around local garbage cans multiple times.

According to Klein, one incident found the president, his wrist bandaged for reasons kept under wraps (the press speculated Rebecca “might have bitten the hand that fed her”), sending his pet to the zoo for a days-long exile. 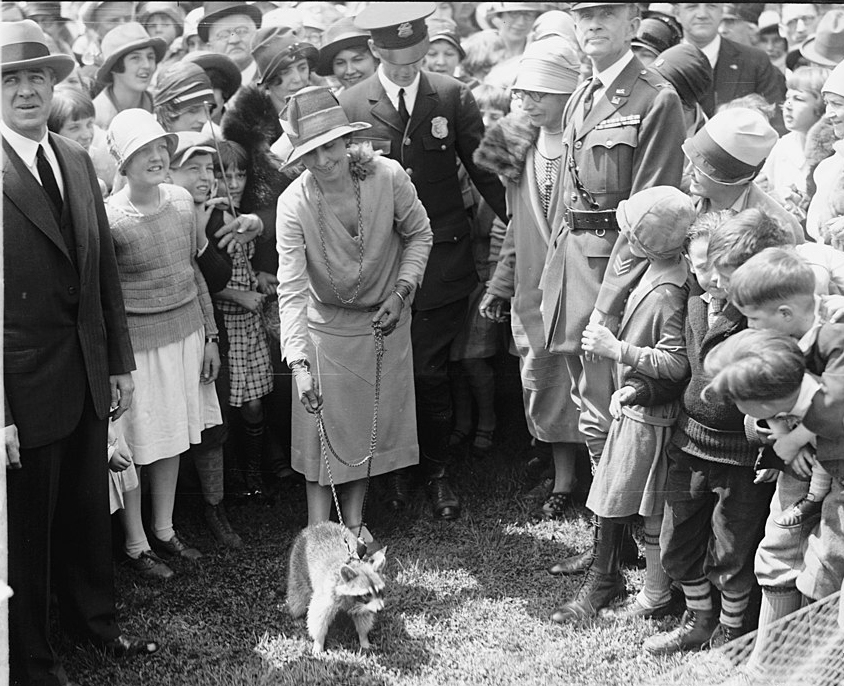 The First Lady and Rebecca in 1927. Photo from the Library of Congress / Wikimedia Commons / Public Domain.

After leaving the White House in 1928, the Coolidge family donated Rebecca to the same zoo where she had once been exiled. Sadly, she failed to adapt to zoo life and died shortly thereafter.

Americans’ appetite for raccoon and small game began to diminish as meat produced in factory farms became cheaper and more widely available. As Matthew L. Miller writes for the Nature Conservancy, perceptions of the charismatic critter shifted over the decades, with raccoons gaining a reputation as mischievous nighttime pests (and rabies carriers) rather than delectable delicacies.

Still, raccoon meat’s culinary legacy remains apparent in many areas of the country. The animals are sold in some markets, including by vendors in the Soulard Market in St. Louis, and directly to the public by hunters and trappers. For the past 93 years, the American Legion in Delafield, Wisconsin, has hosted a “Coon Feed” in January; the event feeds guests about 350 plates of raccoon meat. Gillett, Arkansas, has hosted a “Coon Supper” for 76 years.

The exact number of raccoons set to appear on Thanksgiving tables this year is difficult to pinpoint, but at least one notable celebrity—Anthony Mackie, an actor who portrays Falcon in the Marvel Cinematic Universe—has gone on record as a fan of the practice. As he tells “Entertainment Tonight,” raccoon is “honestly the best meat you’ll ever have.”

We have a coon that craps in the back yard. Caught him on the camera.

I'm gonna try to convince the wife we should capture him for Christmas dinner....
Disclaimer: this post and the subject matter and contents thereof - text, media, or otherwise - do not necessarily reflect the views of the GIM2 administration.