This isn't in a copy/paste format but is Rand's original report. https://www.scribd.com/embeds/42369...ions=true&access_key=key-QLVX4YnXbjXEmwmpEheq 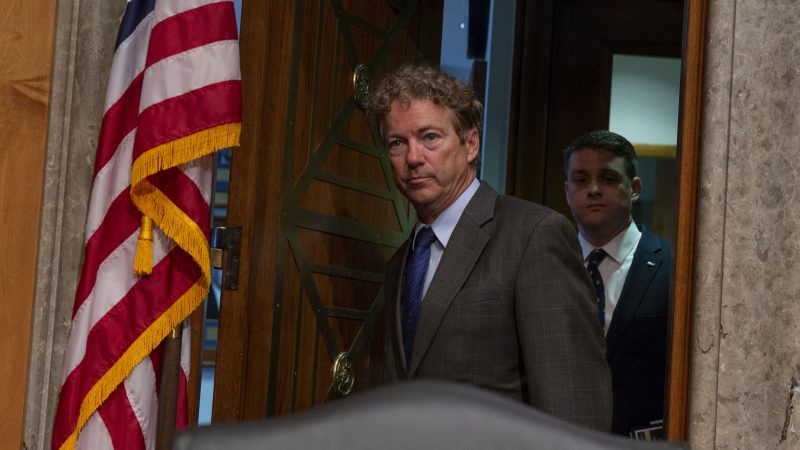 (Alex Edelman/CNP/AdMEdia/SIPA/Newscom)
American taxpayer money helped boost political parties in Tunisia and subsidize films made in Pakistan—because "nation building" might have fallen off the front pages, but it remains part of the federal budget.

Both are highlighted in a report published last week by Sen. Rand Paul's (R–Ky.) office. The summer 2019 edition of Paul's ongoing "Waste Book" project includes more than $50 billion in wasteful government spending, including not only nation-building exercises in the Middle East, but also studies of frog mating calls, building "green" infrastructure in Peru, and improper payments made by federal entitlement programs.

In Tunisia, the State Department spent $2 million to "strengthen democratic institutions and processes," apparently as part of an effort to increase trust between the Tunisian people and their nascent democratic system. Paul's office points out that the State Department has spent more than $1.4 billion trying to shore up Tunisian democracy since the 2011 uprising that deposed Zine El Abidine Ben Ali, who had ruled as a dictator since 1987.

Indeed, American attempts at nation building in Tunisia have been less disastrous (and far less expensive) than elsewhere, but that hardly justifies well-intentioned but likely futile attempts to impose political stability from the outside. If anything, the American government's involvement in Tunisian domestic politics will only make locals less trusting of the political process.

Spending $100,000 to help underwrite film productions in Pakistan seems like an equally impotent way to sow the seeds of democracy. The grant is supposed to help facilitate the making of up to 50 short films by Pakistani filmmakers—the movies are supposed to have themes of "strength in diversity" and "women's empowerment" according to the grant application documents. As nice as that might be, it seems pretty far outside the American government's essential functions, particularly since the State Department also says the Pakistani film industry is already "growing dramatically."

Wasteful exercises in nation building are, sadly, not anything new. Last year, Reason's Brian Doherty reported on the shocking levels of waste found by the Special Inspector General for Afghanistan Reconstruction. Among other things, American taxpayers paid $43 million for a natural gas filling station in a country where there are few natural gas-powered vehicles, $60 million for an uninhabitable hotel in Kabul, and $28 million for new camouflage military uniforms designed to mimic a forest environment—despite the fact that Afghanistan isn't really known for its forests.

No single spending item is going to solve America's $22 trillion national debt, but every little bit of wasteful spending makes the tough problems more difficult to solve. Paul's report includes more than $50 billion in waste, though the vast majority of that total ($48 billion of it) is due to improper payments made by the Centers for Medicare and Medicaid (CMS). That's been a recurring problem for the federal agency responsible for the two major medical entitlement programs—the Government Accountability Office (GAO) has listed CMS as a "high-risk program" for wasteful spending every year since 1990.

The Department of Homeland Security's ongoing efforts to renovate an abandoned Washington, D.C., mental hospital to be used as a new headquarters was a distant second in Paul's accounting. His report claims DHS has spent more than $2.1 billion on the project so far, and there is still more work to be done at the site.

Set against the nation-building projects and other weird examples of waste, those two projects provide a helpful illustration of the federal government's real spending problem. As nonsensical (or even counterproductive) as some foreign aid projects can be, it is entitlement programs and basic operational costs (like the overhead expenses that come from employing more than 2 million people) that must be targeted if federal spending is to be reduced in a meaningful way.

Anyone up for some Fukashima sushi?

Million here million there, millions billions...
I remember when I was a little kid I used to get the two confused. I think remember the first time I heard the word trillion.
I think politicians confuse the 3 also.
And why should they care? Fat and happy bastards living the high life. All the while suggesting I turn up my air conditioner.
Next they'll have you eating one another.
How'd we get here?

historyrepete said:
...
How'd we get here?
Click to expand...
Mis-identification of the root of the problem, and forgetting what past founders wrote.

His dad wanted a roll back to the original constitution, it's a good idea IMO. I also like the idea of a 50-state secession. I 100% believe the people of my state could fix our own problems if we were left alone and detached from the giant nanny-control federal beast.
The republic was a nation built upon inalienable rights, it was not intended to be a democracy for the dictates of the majority, the powerful or the influential.