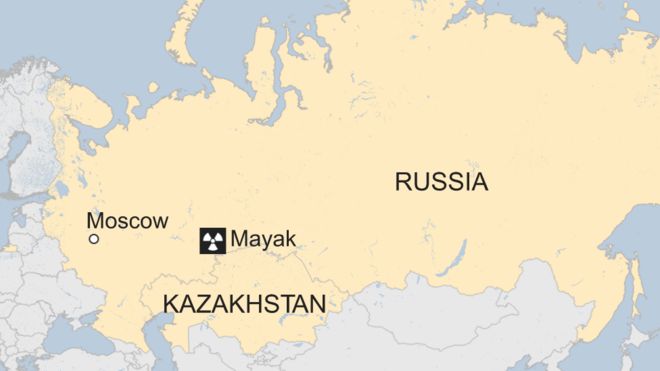 Russia says a nuclear accident has not occurred on its territory despite "extremely high" traces of a radioactive isotope being found.

Russia's weather service acknowledged it had measured pollution of ruthenium-106 at 1,000 times normal levels in the Ural mountains.

It said there was no health risk.

The announcement appeared to confirm a report by France's nuclear safety institute which detected a cloud of radioactive pollution over Europe.

The Institute for Radioprotection and Nuclear Safety (IRSN) said on 9 November it had detected ruthenium-106 in France. It added that the source of contamination could have been an accident at a nuclear facility in either Russia or Kazakhstan.

Both countries said nothing untoward had happened at their plants.

The report by the Russian meteorological service, Roshydrome, is the first official data from the country supporting the French report.

A station close to the Mayak nuclear facility in Chelyabinsk region indicated levels 986 times those of the previous month, it said, without specifying the origins of the pollution.

Mayak, owned by state nuclear company Rosatom, is a large plant that reprocesses nuclear fuel. It said it was not the source of the increased level of ruthenium-106 while Rosatom said there were no accidents at any of its facilities.

The Mayak plant was the scene of a major nuclear accident in 1957, when a waste storage facility blew up.

Ruthenium-106 is a product of splitting atoms in a reactor and does not occur naturally. It is also used in some medical treatments.

Something broke...I hope they contain it better that last time.
Suck it Buttercup, we will be as loyal to Trump as you were to Obama...

Old (not THAT old), but dangerous, pasty white guy

oops!
'I pledge allegiance to the flag of the United States of America; and to the Republic, for which it stands, one nation under God, indivisible, with liberty and justice for all!'
(except in California, New York, New Jersey, Michigan, Illinois, Massachusetts, parts of Oregon and WA state, and all of Washington DC)