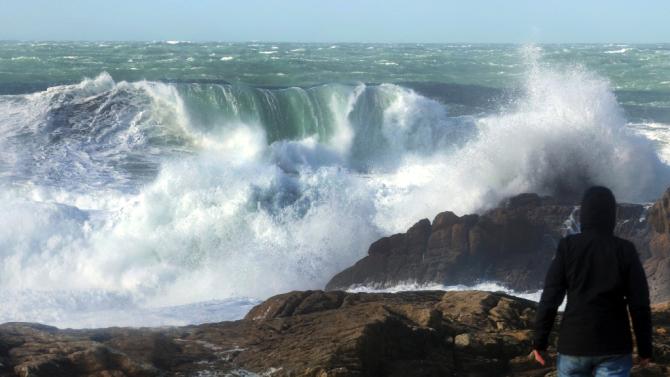 Sea levels rose globally by about 5.5 inches (14 centimeters) from 1900 to 2000, said the study led by Rutgers University, published in Proceedings of the National Academy of Sciences (AFP Photo/Fred Tanneau)
Miami (AFP) - The world's oceans are rising at a faster rate than any time in the past 2,800 years, and might even have fallen without the influence of human-driven climate change, researchers say.


Sea levels rose globally by about 5.5 inches (14 centimeters) from 1900 to 2000, said the study led by Rutgers University, published in Proceedings of the National Academy of Sciences.

In the absence of global warming, the change in sea level would have been far less -- ranging between a 1.2 inch (three centimeters) drop in the last century, to a rise of about 2.8 inches (seven centimeters).

"The 20th century rise was extraordinary in the context of the last three millennia -- and the rise over the last two decades has been even faster," said lead author Robert Kopp, an associate professor in Rutgers University's Department of Earth and Planetary Sciences.

The study also predicted that global sea level will rise by 1.7 to 4.3 feet (50 to 130 centimeters) in the 21st century if the world continues to rely heavily upon fossil fuels.

Even if fossil fuels were phased out, the seas would likely mount between 0.8 and two feet by century's end, it said.

Average global temperature today is about 1.8 degrees Fahrenheit (one degree Celsius) higher than it was in the late 19th century.

The Rutgers-led study -- with co-authors from Harvard University, the Woods Hole Oceanographic Institution and the Potsdam Institute for Climate Impact Research in Germany -- was based on a database that included records from 24 locations around the world, and 66 tide-gauge records from the last 300 years.

Scientists say the planet is incredibly sensitive to small changes in temperature, with today's average climate about 1.8 degrees Fahrenheit (one degree Celsius) warmer than it was in the 19th century.

"During the past millennia sea-level has never risen nearly as fast as during the last century," said co-author Stefan Rahmstorf, co-Chair of the Potsdam-Institute for Climate Impact Research's (PIK) research domain Earth System Analysis.

"The new sea-level data confirm once again just how unusual the age of modern global warming due to our greenhouse gas emissions is -- and they demonstrate that one of the most dangerous impacts of global warming, rising seas, is well underway."

A second report issued to Monday by Climate Central found that without the global warming, more than half of the 8,000 coastal nuisance floods seen in the United States since 1950 would not have occurred.
https://news.yahoo.com/sea-level-rising-fastest-pace-2-800-years-000357615.html

one question, really easy one

How do the current pretenders declare that they even know with certainty what it was 2800 yrs ago, and the whole period since then?
Sound of Silence

How do the current pretenders declare that they even know with certainty what it was 2800 yrs ago, and the whole period since then?
Click to expand...
QWAK,Scorpio,"How did they measure sea level 2800 years ago?" ---- perhaps a very VERY old yard stick --- or CUBIT stick ??

Bullshit. The oceans did not rise, the land is sinking. Can you prove me wrong?

Location
In a world gone mad....

How do the current pretenders declare that they even know with certainty what it was 2800 yrs ago, and the whole period since then?
Click to expand...
Exactly!
“Those who tell the stories rule society.”
by Plato
“Once a government is committed to the principle of silencing the voice of opposition, it has only one way to go, and that is down the path of increasingly repressive measures, until it becomes a source of terror to all its citizens and creates a country where everyone lives in fear.” Harry S Truman

the really advanced chosen few of civilization stare at rocks and can see everything there is to see with incredible precision going back millions of years.

Anybody who has two brain cells to rub together stopped listening to the exact science a long time ago. It's all propaganda and unproven 'truths'
'I pledge allegiance to the flag of the United States of America; and to the Republic, for which it stands, one nation under God, indivisible, with liberty and justice for all!'
(except in California, New York, New Jersey, Michigan, Illinois, Massachusetts, parts of Oregon and WA state, and all of Washington DC)

The only thing rising faster than the sea levels is the amount of pseudo-scientific agit-prop BS masquerading as real science.
"No man's life, liberty or property are safe while the legislature is in session." -- New York State Surrogate Court Judge Gideon John Tucker, Final Accounting in the Estate of A.B._, 1, Tucker (N.Y. Surrogate Court) 247, 249 (1866)

35 to 40 foot waves are common on the north shore Oahu but they break normally before reaching the hwy so the swells are pushing them inwards which could be caused by gravitational pull of the moon .. it was the closest to earth in recent times.. not long ago.
IF YA CANT DAZZLE THEM WITH BRILLIANCE BAFFLE THEM WITH BULLSHIT.

What's the big deal.....isn't 5.5 inches supposed to be average???
It might well be said that, while the free market bends over backwards to serve the needs and desires of individuals, the state merely bends individuals over backwards.
You must log in or register to reply here.
Share: Twitter Link