stands to reason does it not?

if the banks are paying you less than zero then how much sense does it make to participate in their game?

Japan’s negative interest rates are boosting demand for gold, according to the nation’s biggest bullion retailer.

International prices have rallied 18 percent this year as investors seek a haven from financial market turmoil. For individual investors, the Bank of Japan’s surprise move in January is adding to gold’s allure, according to Takahiro Ito, chief manager at Tanaka Kikinzoku Kogyo K.K.’s store in Tokyo’s Ginza shopping district. That’s helped lift retail prices to their highest since July.

“Many customers are wagering that it’s better to turn their savings to gold as a safe asset rather than deposit money at banks that offer low interest rates,” he said in a phone interview last week.

The price of gold bars climbed to 5,027 yen ($44) a gram on March 11, the highest since July 7, according to the Tokyo-based company. “Many customers usually sell gold, but we get the feeling that more customers are buying gold even at prices exceeding 5,000 yen,” Ito said.

In a bid to stimulate bank lending, the BOJ has joined the European Central Bank in setting rates below zero. While that should also spur investment in higher-yielding assets, it may also have had the unintended consequence of households squirreling away cash -- or turning to a traditional store of value such as gold. Sales of safes in Japan are surging, suggesting as much. 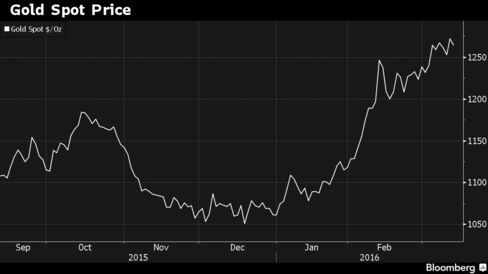 The BOJ’s policy has led to misconceptions among investors, said Ito. Some buyers believe that negative interest rates could be accompanied by bank fees on savings, while older Japanese fear a repeat of their experience after World War II, when the government restricted cash withdrawals to stem inflation.

The move to gold among retail investors is showing up elsewhere. In the U.K., online trading service BullionVault said on March 1 the number of new customers more than doubled in February, reaching the highest since April 2013.

“Worsening fears over negative rates and political risks like Brexit have led the return of some money managers to gold,” Adrian Ash, head of research at the firm said in a report. “A fast-growing number of private investors have also begun buying gold as insurance.”

Consumer demand in Japan rose to 32.8 metric tons in 2015 from 17.9 tons a year earlier, making it the seventh largest consumer in Asia, according to the World Gold Council. Spot gold was 0.4 percent higher Monday at $1,254.76 an ounce.

I was thinking miners would be a good way to go.

??? How can I have a negative gain and it not be a loss? And, I can purchase gold this way? By gollie shamrock and toadstools that girl was right.....I too can unleash my birth certificate because I am rich....bazillion or so. Thank you parents for opting me into the corporation .....So'$ I can make bank.....So question: does this work in farming or ranching also?

Why yes it does...whooooohoooooo it is called the PIC program in farming not sure I can get paid for beef unless I sell it at auction....maybe an empty stock trailer is proof?

$0....if I just till the ground (PIC) and have no harvest it is a payday.
And, if I hitch up th wagon then it also is a payday.

Hummmm, why do I feel like Richard Nixion?
communis error no facit just. A common error does not make law.

And, I offer this as a sallie against your rebuttals of negative gain and purchasing powers....

Yeah not picking a fight here BUT as you can tell prime numbers are akin to interest/gain....it only is in the positive direction ....my self,me has never heard or has been told of a irrational prime or a irrational gain.

BUT I CAN PURCHASE GOLD? with nothing? Yeah me b down with that.
communis error no facit just. A common error does not make law.

QWAK,I sit to reason because when I stand to reason I get dizzy and confused!

I AM, the DUCK

What exactly could be confusing about the modern world of finance and banking?

Zero is not prime because it has more than two divisors. :))
“The nitrogen in our DNA, the calcium in our teeth, the iron in our blood, the carbon in our apple pies were made in the interiors of collapsing stars. We are made of starstuff.”
― Carl Sagan, Cosmos
You must log in or register to reply here.
Share: Twitter Link