Virginia City, Nevada, 1866
It wasn’t just gold and silver miners who flooded Nevada in the late 1800s in search of their fortunes. Nevada, like other states of the Wild West, attracted its share of outlaws and bandits. One such man, named Andrew Jackson “Jack” Davis, led a gang of thieves involved in robbing stage stops, bullion wagons, and trains in Western Nevada.
First arriving in the area in 1859, Davis led two different lives. To the outside world, he looked like a legitimate businessman when he set up a livery stable in Gold Hill. However, in his “spare” time, Davis and his gang took to the bandit road, taking gold and bullion from any source they could find.
Davis built a small bullion mill in Six Mile Canyon east of Virginia City, Nevada and melted down his stolen gold, selling it as legitimate gold bars. He then buried his proceeds so people would not notice or catch on to how wealthy he really was. 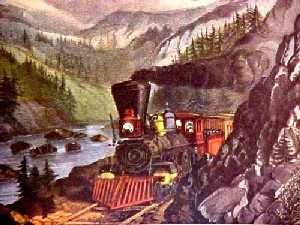 Railroad along the Truckee River.
On November 4, 1870, the gang robbed the express car of the Central Pacific Railroad near Verdi, Nevada taking some $40,000 in gold coins and bullion. Pursued by lawmen, they were said to have buried the stolen cache along the north bank of the Truckee River, between Reno and Laughton’s Hot Springs west of town, near the site of the long-abandoned River Inn.
The entire gang was apprehended and all were sent to the Nevada State Prison, but would not tell where they had hidden their stolen loot.
In 1875, Davis was paroled but two years later, he was shot in the back during a Wells Fargo stagecoach robbery near Warm Springs, Nevada. If Davis ever returned for his cache is unknown, but many believe it is still hidden in Six-Mile Canyon or in the vicinity of the Truckee River. Treasure hunters have long searched these two locations without success.
Another legend abounds that the ghost of Jack Davis protects his treasure in the canyon. Many who have looked for the treasure have been frightened away by the white screaming phantom that is said to sometimes sprout wings and rise into the air.
© Kathy Weiser/Legends of America, updated February 2020.

Virginia City, Nevada, 1866
Though Andrew Jackson “Big Jack” Davis started out as an honest miner, shortly after he moved from California to Nevada, the course of his career changed. A well-educated and intelligent man, “Jack” Davis had been mining in the Sierra Nevada Mountains, but when he didn’t find his fortune in gold, he moved on to the Comstock Lode in Nevada Territory in late 1859. This time; however, rather than working as a miner, he felt that his fortune might be made in providing services to the miners, rather than carrying on the back-breaking work of actual mining, and soon built the first stable in Gold Hill.
As he soon tired of shoveling hay, grain and manure, Davis then leased a small bullion mill in Six Mile Canyon east of Virginia City, Nevada. The mill, in addition to providing services to area miners, was also doing a bit of underhanded work.
By all appearances, Davis was a legitimate businessman, but he was surreptitiously rounding up a gang of thieves that was soon be involved in robbing stagecoaches, bullion wagons, and trains in Western Nevada. Using his mill to melt down the stolen gold, he was soon selling “legitimate” gold bars.

Train Robbery
On November 4, 1870, Davis led the gang in holding up the Central Pacific Railroad between Verdi and Reno, Nevada. Along with gang members, John Squires, James Gilchrist, Tilton Cockerill, and R.A. Jones, the robbers boarded the train at Verdi and when it reached a deserted stretch of track paralleling the Truckee River, the robbers slipped the pin behind the express car, and the passenger coaches fell back. As they entered the Express car, the Wells-Fargo messenger gave the outlaws no trouble. They then ordered the engineer to pull to a stop at an abandoned stone quarry and the robbers rode off with nearly $40,000 in gold and silver coins.
Though the outlaws had done a “good” job robbing the train and getting the lead on their pursuers, they would be undone by R.A. Jones, when he began to spend his share of the loot foolishly. Unable to explain his newly found wealth, he was picked up for questioning in the robbery, soon confessed and named the others. Much of the stolen cache was said to have been returned to the company, but the rest was allegedly buried along the north bank of the Truckee River, between Reno and Laughton’s Hot Springs west of town, near the site of the long-abandoned River Inn. (see Stolen Loot at the Truckee River)
All five of the men were sentenced to serve time in the Nevada State Prison. Davis was sentenced to serve ten years. In 1871, 29 prison inmates broke out in the largest prison escape in the West. The inmates included three of Verdi train robbers, but, though Davis could easily have left with the others, he refused. Later, he cooperated with prison officials on providing information on the escapees. The prison warden, P.C. Hyman later wrote to the Board of Pardons, explaining Davis’s assistance and requesting his release. He was let go on February 16, 1875.
Though Davis had been a model prisoner, it didn’t take him long to return to his old ways after his release. He was soon robbing stages again. He was very careful to rob only those stages that carried one shot-gun messenger, but his cautiousness, in the end, would not be enough. On September 3, 1877, he went to rob a stagecoach at Warm Springs, Nevada. During the attempted robbery, he was shot and killed.
Treasure hunters have long searched in Six-Mile Canyon and along the Truckee River, looking for the gold that Davis was said to have buried, without success. Another legends abounds that the treasure is protected by the ghost of Jack Davis who appears as a white screaming phantom to scare the hunters away. 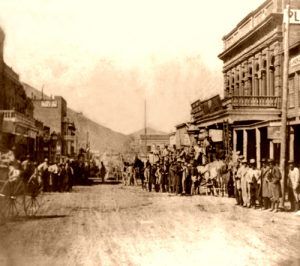 On a "hidden treasure" bent this morning, huh?

Nice to think about sometimes, though.

Do justly, love mercy, and walk humbly with God.​

I love treasure stories! The people who put in the research and work to find these lost treasures ain't sitting on the couch with a remote in their hand.
Think about how many treasure stashes are found that we don't hear about. Those are the smart feckers!

have wondered if the future of treasure hunting is related to drone tech also,

in that how long before the tech is avail to do virtually an xray of a area on a drive by shooting?
Sound of Silence

I wonder much it would cost to rent a ground-penetrating radar unit? It would "see" a lot deeper into the earth than either a drone or a metal detector.
Orthodox Jedi
Make mine a vodka and vicodin latte.

have wondered if the future of treasure hunting is related to drone tech also,

in that how long before the tech is avail to do virtually an xray of a area on a drive by shooting?
Click to expand...
I could fly a drone down the beach to spot holes and troughs in the surf and then just walk right to them.
I think some of the ocean guys are already doing it.
Problem for me is I would need to learn how to fly a drone, drones are expensive and I would need some kind of monitor or screen so I could look at the video in real time.
Also, I'm cheap and I need the exercise anyway.

Alton said:
I wonder much it would cost to rent a ground-penetrating radar unit? It would "see" a lot deeper into the earth than either a drone or a metal detector.
Click to expand...
Garrett makes a huge ground penetrating metal detector for finding caches that attaches to their GPX 2500. You carry it and look at the screen.
I'll find a picture............