This is crazy/scary/sad all rolled into one. Also, if you don't know about Xanax, Xanax is a mind-altering, highly addictive, yet commonly prescribed drug to 'induce feelings of calmness that counter feelings of anxiety and panic'. 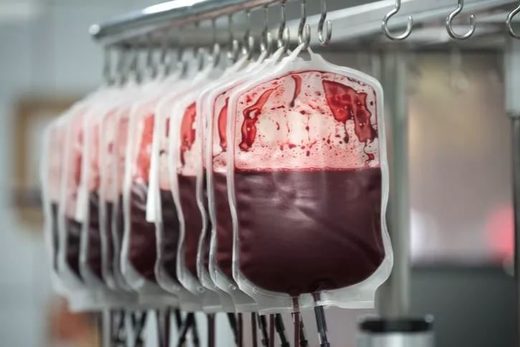 Writing in the Journal of Pharmaceutical and Biomedical earlier this month, researchers were surprised by the level of pharmaceuticals detected in supposedly clean blood batches — in particular, the concentrations of cough medicine and anti-anxiety medication.

The testing also revealed that all 18 batches of blood contained caffeine, suggesting America's love of coffee, tea and other caffeinated beverages runs deep.

The purpose of the exercise was to find out the purity of the blood samples before they were used to test a method for examining the effect of botanicals on drug metabolization. Botanicals are plants or plant extracts taken for medical or therapeutic reasons, such as echinacea, CBD oil and ginko.

"From a 'contamination' standpoint, caffeine is not a big worry for patients, though it may be a commentary on current society," co-author Luying Chen, a PhD student at Oregon State University (OSU), said in a statement.

"But the other drugs being in there could be an issue for patients, as well as posing a problem for those of us doing this type of research because it's hard to get clean blood samples."

In the end, the researchers had to reject all the blood batches tested except for samples from two donors who had agreed ahead of donation not to drink or eat anything containing caffeine.

The researchers also tested the blood for a drug used to treat type 2 diabetes (tolbutamide), but did not find any traces of the medicine in the batches tested.

While an interesting insight into the country's Xanax habit, the purpose of the research undertaken by Chen and Richard van Breemen, a Professor of Medicinal Chemistry at OCU, was to find out how botanical dietary supplements affect the way drugs are broken down by the body.

Understanding this is important as use of botanicals is increasing. A report published by the American Botanical Council found sales herbal supplements jumped 8.5 percent in 2017, exceeding $8bn for the first time. Demand for botanicals appears to be driven by health and wellness trends and a growing preference for natural health products, according to Research and Markets.

"Botanicals basically contain natural products with drug-like activities," said van Breemen. This means they can affect enzymes in the body just in the same way as manufactured drugs can — an interaction that can cause problems in terms of drug-metabolization in people who take both. It is estimated that almost half of all adults in the U.S. use prescription medications.

The way prescription drugs and botanicals interact is "not straightforward or necessarily predictable," says van Breeman. "The odd thing in this case was finding all the tainted blood.

"Another thing to consider is that we found drugs that we just happened to be looking for in doing the drug interaction assay validation — how many others are in there too that we weren't looking for?"

Ultimately, the study involved a relatively small sample of blood. This means it may be hard to infer how widespread the problem of drug contamination in donated blood really is without further testing on a much larger sample size from a diverse range of sources.

A friend of mine tells me tails of his old buddy getting zannied out. It sounds like it erases your memory of the night before when you were speaking complete gibberish and spending/giving/losing all the money in your pockets. No thanks!
Falun Dafa
Truthfulness - Benevolence - Forbearance

Makes you want to have your OWN blood drawn, fill up transfusion bags with it, and save it in the fridge for in case you need an operation...
Anything that is printed on this page is purely fictional, and is in the context of an alternate virtual reality in a parallel universe. I, myself, am a fictional character! Any statements which appear to have a resemblance to real people or institutions or events, past, present or future, are unintentional and the result of pure coincidence.

Proud of my tin-foil hat - this is pride of something EARNED (I'm a self-made "nut"!) - and anything I may say should be taken in this context!

dacrunch said:
Makes you want to have your OWN blood drawn, fill up transfusion bags with it, and save it in the fridge for in case you need an operation...
Click to expand...
OK, crunchie, ya triggered a story:


A Cup Of Sweetness…​
c Walt C. Snedeker​
​
As The Fabled PC, my long-suffering Scottish spouse likes to point out, I have the mind of a child. It’s true; I keep it in a jar under the bed.

My sense of humor, she says, sometimes ought to have its license revoked. This last pronouncement came as a result of some small misbehavior on my part that took place in the local hospital.

Seems that I needed to have knee surgery. Ouch. And the deal was that since this was a scheduled affair, I was to give my own blood for the future operation. Side Note: I have since discovered by talking with Scooter (My-son-the-doctor) that they don’t need this blood for these operations. They use it for the beautiful rose bushes outside on the hospital grounds. But this information is to remain strictly between us folks. Back to the story.

So I go on down to the hospital, and go through all the depositions, mortgages, interviews, and entrail divinings that hospital minions delight in inflicting upon us lowly civilians to prepare for this blood donation.

Having been fingerprinted and DNA’d, retinal-scanned, and my genealogy confirmed for seven generations, they passed me to the Second Stage.

That’s the one where they have ten chairs that were left over from a movie about Auschwitz and Dr. Mengele, all empty, with tubes and syringes and other scary things hanging from them. Of course, even though there is nobody else giving blood, there has to be a fifteen minute wait (to build up your blood pressure, I can only assume).

Finally, in comes Dr. Quasimodo with a gasoline can and a razor to get some blood from my quivering alabaster bod.

A palsied gnome with thick, clumsy fingers began to probe various parts of my arm with a section of epoxied garden hose, eventually causing a serious flow to ensue. Kewl. Some minutes later, having donated my own gore, they gave me one of those apple juice containers with the foil lid.

You know the kind: they hand them out in airplanes. No matter how carefully you attempt to peel back the foil, the pressurized juice is guaranteed to erupt, so that ALL the passengers can have the experience of dumping apple juice all over themselves.

I'm a fairly large and healthy guy, so I really don't need a sugar hit after giving a pint of blood... that’s why I decided to put the unopened container in my pocket, so I could open it later when I had my wetsuit on.

I got up to leave, when a particularly acerbic lady in a nurse’s outfit suddenly brayed at me:

It wasn’t easy, Gentle Reader to withhold the entire series of comments that this straight line handed me, but I was noble. I looked over at her. Her nametag identified her as Miss Demeanor. I was obviously something that annoyed her (I was a patient, albeit only temporary, and ambulatory at that – a double annoyance to her.)

She sighed and snorted at the same instant – an accomplishment which I found impressive – and imperiously beckoned me to the foot of her throne.

"Here, take this and go give me a sample."

“This” was one of those little plastic cups (you know the ones) and she pointed a peremptory finger at the potty door. Ever obedient as always. (Ah, an interruption – The Fabled PC is reading this as I relate it, and her comment on that “obedient” quote has just disproved the adage that two positives cannot make a negative:

Regarding it, she says, “Obedient... Yeah, right!”

Getting back to the story, I walked into the aforementioned potty… and the Devil bit me right on the butt.

I took out the container of apple juice, ripped off the top, and poured the contents into the specimen cup.

The empty container went into the convenient wastebasket thoughtfully provided by the hospital housekeeping folks.

When I came out of the potty proudly waving my brimming specimen cup, Miss Demeanor got her PMS in high gear.

"You are supposed to leave it in there on the shelf, not bring it out here!" This, with a rolling of the eyes and a sigh that Hillary Rodham would die for.

Sooo... I sez very politely: "Dang, Miss Demeanor, ma'am, I'm powerful sorry I didn't read your mind, and therefore have apparently made it so this here sample is contaminated. Tell you what: I’ll just recycle it for you!”

With a nice flourish, I upended the specimen cup and drank it down.

She went echoing down the hallway, calling for Security, doctors, and probably the cotton-picking FBI.

A lot of folks immediately gathered round, so I quickly went into the potty, retrieved the empty apple juice container and showed it to them with my charming boyish smile. A couple of the doctors began laughing so hard they spotted.

When Miss Demeanor came back, EVERYBODY was laughing (and several were pointing at HER, with tears in their eyes).
"People do not have the right to unregulated rights in this country." -- Al Sharpton
T

More fake news from clueless "journalists". The linked abstract says "Out of 18 lots of pooled human serum tested, caffeine was detection in all lots, alprazolam was detected in 13 lots, 8 lots contained dextromethorphan, and no tolbutamide was detected. " Notice the word "pooled". Extrapolating this result to "70% of Americans'donated blood" is ignorant. The stated purpose of the study "was to find out how botanical dietary supplements affect the way drugs are broken down by the body", so they needed to find serum samples with what they were testing for to achieve their purpose, which has nothing at all to do with what the headline invents.
You must log in or register to reply here.
Share: Twitter Link