Fri thru Sunday only

You are using an out of date browser. It may not display this or other websites correctly.
You should upgrade or use an alternative browser.

The 1794 Whiskey Rebellion: History and Significance

The 1794 Whiskey Rebellion: History and Significance​

Hated tax led to uprising on the Pennsylvania frontier​ A tax collector tarred and feathered during the Whiskey Rebellion.
Fotosearch/Getty Images

By
Robert McNamara
Updated on February 29, 2020

The Whiskey Rebellion was a political crisis in the early years of the United States, which was triggered when a tax on alcoholic spirits sparked a backlash among settlers on the western frontier of Pennsylvania. The situation eventually erupted in violence considered serious enough that federal troops, led by Alexander Hamilton and President George Washington, marched on the region in 1794 to suppress the rebellion.

Attacks on tax collectors by masked gangs had been occurring for a few years, but the lawlessness essentially dissipated as the federal troops drew close. In the end, Washington and Hamilton did not need to lead troops into combat against fellow Americans. The rebels who wound up being arrested ultimately escaped punishment.

The episode exposed a deep fissure in early American society, a bitter split between financiers in the East and settlers in the West. However, everyone involved seemed willing to move on from it.

Origins of the Tax on Whiskey​

When the U.S. Constitution was ratified in 1788, the newly formed federal government agreed to take on the debts the states had incurred while fighting the War of Independence. That was, of course, a burden on the government, and the first secretary of the treasury, Alexander Hamilton, proposed a tax on whiskey which would raise some of the needed money.

A whiskey tax made sense in the context of the times. Americans were consuming a lot of whiskey, so there was a considerable amount of commerce to tax. Because roads at the time were so poor, transporting grain could be difficult, so it was easier to turn the grain into whiskey and then transport it. And in some regions, grain grown by settlers, once converted into whiskey, was commonly used as a form of currency.

The whiskey tax, which was passed by Congress and became law in 1791, may have made sense to legislators from the East. However, members of Congress representing frontier populations, realizing how it would impact their constituents, objected to it. When the tax bill became law, it wasn't popular anywhere in the country. To settlers along the western frontier at the time, comprising regions of Pennsylvania, Virginia, and North Carolina, the tax on whiskey was particularly offensive.

Life for the western settlers was notoriously difficult. In the 1780s, as Americans headed across the Allegheny range of mountains, they discovered that much of the good land was already in the hands of wealthy land speculators. Even George Washington, in the years before he became president, had invested in thousands of acres of prime land in western Pennsylvania.

The families who had traveled into the region to settle, who were often immigrants from the British Isles or Germany, found themselves having to farm the least desirable land. It was a hard life, and the danger from Native Americans unhappy about the encroachment on the land was a constant threat.

In the early 1790s, the new tax on whiskey was viewed by the western settlers as an unfair tax designed to aid the financial class living in the cities of the East.


Unrest on the Frontier​

Following the whiskey tax becoming law in March 1791, officials were appointed to enforce the law and collect the tax. The new tax collectors were provided with a manual, written by Hamilton, giving precise instructions on calculating the tax and keeping records.

The tax itself was calculated based on the size of a distiller's still and the proof of the whiskey produced. It was estimated that the average distiller would owe a tax of about $5 a year. That sounds like a small amount, but to farmers in western Pennsylvania who were generally operating in a barter economy, that much money could represent a lot of a family's disposable income for a year.

In late 1791, a tax collector in Pittsburgh, Pennsylvania, was seized by a mob of masked men who marched him to a blacksmith shop and burned him with hot irons. Other attacks on tax collectors occurred. The attacks were intended to send a message, and were not fatal. Some excise officers were kidnapped, tarred and feathered, and left suffering in the woods. Others were severely beaten.

By 1794, the government was essentially incapable of collecting the tax in western Pennsylvania, thanks to an organized resistance movement. On the morning of July 16, 1794, about 50 men armed with rifles surrounded the house of John Neville, a Revolutionary War veteran who was serving as a federal excise collector.

The group besieging Neville's house demanded that he resign his position and turn over any information about local distillers he had gathered. Neville and the group exchanged some gunfire, and one of the rebels was fatally wounded.

The following day, more local residents surrounded Neville's property. Some soldiers stationed at a nearby fort arrived and helped Neville escape to safety. But in a confrontation, several men were shot on either side, some fatally. Neville's house was burned to the ground.

The attack on Neville represented a new phase of the crisis. Two weeks later, on August 1, 1794, about 7,000 local residents turned out for a mass meeting in Pittsburgh. The crowd expressed grievances, but what could have turned into a violent riot was calmed. The people at the meeting, mostly poor local farmers, peacefully returned to their own farms.

The federal government was greatly alarmed by the activity in western Pennsylvania. President Washington was disturbed to hear reports that the rebels may have been meeting with representatives of foreign governments, Britain and Spain, about possibly leaving the United States entirely.

Alexander Hamilton resolved to take serious action against the rebels, and by September 1794, he was organizing a military force of more than 12,000 troops which would march westward and crush the rebellion. At the end of September, the federal force, consisting of militia members drawn from four states, began moving westward through Pennsylvania. George Washington, in a uniform resembling what he had worn as a general in the Revolution, was leading the troops, along with Alexander Hamilton.

Washington was determined to put down the growing rebellion. But his return to military duty was difficult. He was no longer the young soldier who had ventured to the Pennsylvania frontier in the 1750s, or the venerated leader of the Revolution. In 1794 Washington was 62 years old. He traveled with the troops, usually riding in a carriage, with the rough roads aggravating his bad back. After traveling to central Pennsylvania, where he was greeted by cheering citizens at every town on the way, he turned back.

The troops continued westward, but a confrontation with a rebel force never happened. By the time the troops got to the region of the rebellious activity, the rebels had simply disappeared. Most had drifted back to their farms, and there were reports that some of the most ardent rebels had moved on to the Ohio territory.

As the federal troops moved through western Pennsylvania, there were only two fatalities, both accidents. A local boy was accidentally shot and killed when a soldier dropped his gun, and a drunken rebel supporter was accidentally stabbed with a bayonet while being arrested.

Legacy of the Whiskey Rebellion​

A few rebels were arrested, but only two were tried and convicted. The charges against them were serious, and they could have been hanged, but President Washington chose to pardon them.

Once the rebellion was over, everyone involved seemed content to let the episode fade quickly into the past. The hated tax on whiskey was repealed in the early 1800s. Though the Whiskey Rebellion had represented a very serious challenge to federal power, and it was remarkable as it marked the last time George Washington would lead troops, it had no real lasting effect.

The 1794 Whiskey Rebellion: History and Significance

The Whiskey Rebellion, a popular uprising against a hated tax in the 1790s, prompted President George Washington to lead troops for the last time. 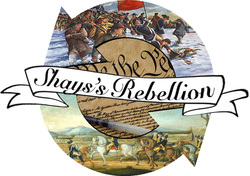 Shays's Rebellion Shays's Rebellion took place under the Articles of Confederation. The federal government was unable to act effectively. Was not put down quickly. Caused by discontent over taxes
shayssrebellion.weebly.com
Sound of Silence