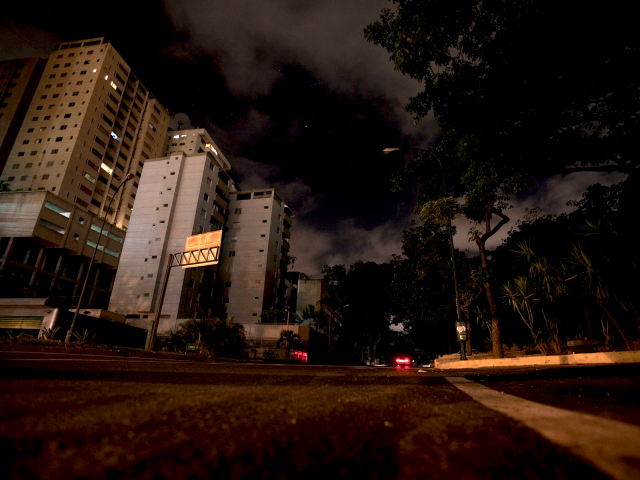 (Reuters)
Unlit buildings seen during a partial blackout in Caracas in 2010.
Venezuela's capital, Caracas, could be about to go dark.

The problem is Caracas' power source. According to Bloomberg, the Guri Dam, a hydroelectric power plant, has seen its water levels dip precipitously low. An engineer who managed the plant in the 1980s said there could be rolling blackouts in Caracas by late April.

"At the current rhythm, the minimum level to operate the eight turbines could be reached by April 30," the retired engineer, Cesar Cardozo, told Bloomberg. "That date could be extended into May if more severe rationing is implemented."

Rationing in all aspects of Venezuelan life has already been severe for years. Citizens wait in long lines for everything from toilet paper to cornmeal. Some, including Johns Hopkins professor Steven Hanke, calculate inflation at near 300%. That is why Hanke dubbed Venezuela "the most miserable country in the world."

The electricity crisis is so bad that President Nicolas Maduro gave the country an additional three days off over Easter to conserve energy.

Power
In true Venezuelan government fashion, the country's leadership is blaming its political opposition for this issue. Electricity minister Luis Motta Dominguez pointed out earlier this month that protests started around the time the electricity system started showing signs of weakness.

The protests he is referring to are the massive, sometimes violent demonstrations that have been held to protest against Maduro's socialist government.

There will not be a presidential election in Venezuela until 2018, and the executive office has sweeping powers. That means the country's decision-makers have a lot of room to run.

So far the policy has been to avoid default on the country's external debt by any means necessary. And it's a lot of debt — about $123 billion as of last month, according to Bank of America Merrill Lynch. Oil is Venezuela's main export, and its low price has only made a terrifying situation much worse.

Executive Vice President Aristobulo Asturias Isturiz recently reiterated that the country would do everything to avoid missing a payment even if "restructuring and refinancing" of debt is necessary.

Venezuela managed to make a $1.5 billion payment in February at the expense, some analysts say, of the country's people. The next payment analysts are watching comes up in October.

Until then the people will be holding their breath, totally in the dark.

Too bad, the people do not deserve it. Next up will be a military government.

They have shit tons of oil, so why not use it to produce electricity ?
Those of us who can count to potato must do it for those who cannot !
T

GOLDZILLA said:
They have shit tons of oil, so why not use it to produce electricity ?
Click to expand...
Global warming

Don't laugh we're next. Whatever dept of political correctness is shutting down coal fired power plants right now and not replacing them with anything to cover the electricity being removed from the grid. Mlive had a short news blurb about possible rolling blackouts this summer in Michigan and the story was removed in less than 1 day.
I know of 2 big power plants that were shut down in west Michigan in the last few months. They have not been replaced with anything that produces electricity.
No lawyer makes their case to a media outlet prior to a court case. It is absurd to even ask them to do so.

Lots of Venezuelan friends here.
One guy, the manager of the coffee shop I frequent, his whole family is down there, but himself, wife and kids here. He got shot in the back some years back and got out. His brother was just here, said its a total travesty and farce. All of the above is a snapshot and theres lots more. All the oil you can imagine and total incompetents in supposed charge. Just like running the whites off the farms in Africa only different. Only gonna get worse. I feel for the people.
Regards to all,

Hafta disagree irons. Following the Venezuelan dictators line of thinking, our dictator will simply fix the problem by expanding welfare thereby shrinking the workforces. Walla, it's that simple folks. Producers are the problem in bizaro world
You must log in or register to reply here.
Share: Twitter Link