The Current Gold Price Is A Gift


The Current Gold Price Is A Gift

By Egon von Greyerz
Two millennia ago, according to the bible, three wise men came to offer Jesus the gifts of gold, frankincense and myrrh. The peak of the Roman Empire is considered to be at the time Jesus was born although it took until 476 AD until the Western Empire finally fell.


Today, just over 2000 years later, we might be standing at another historical peak in the global economy. There are certainly many similarities like deficits, debts and decadence. Just like the Roman Emperors, current leaders have illusions of grandeur of a magnitude that the world has never seen before.

So let’s look at the modern version of the three wise men. What gifts are they bringing the world?As in the illustration below I have picked three central individuals in the world today; Draghi – head of the ECB, Li Keqiang – Premier of China and Abe – Prime minister of Japan. In themselves they are not that important but the country or region they represent is. 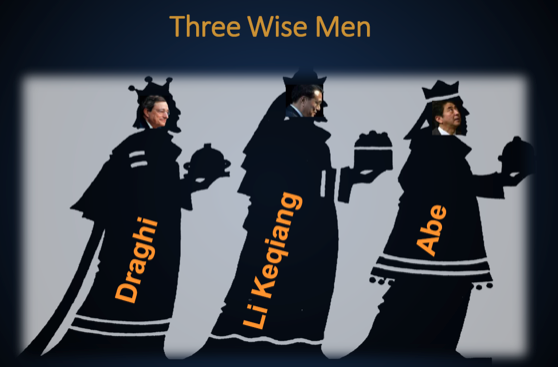 Italy – the next nail in the EU coffin
Let’s first look at Draghi the President of the ECB, obviously with the required Goldman Sachs connections. What gifts is he bringing to the world and especially to Europe. Very little as a matter of fact and certainly not gold or solid finances. Although Draghi can’t be blamed for all the problems of Europe, he certainly personifies them. The European Union is in the process of braking up. Brexit was just the first step but will be followed by many countries who will want to exit until the EU is no more. The Italian election on December 4th could be the next nail in the EU coffin. Initially the EU and its predecessor EFTA was created for free trade between the member countries. But soon the power hungry elite decided that the EU should be a power centre what would control Europe, politically, economically and militarily. But most 500 million EU Europeans have no desire to be controlled by an unelected and unaccountable elite in Brussels. The history, culture and roots of individual European countries is much too strong to lose your identity in some anonymous super structure. Britain, free from the shackles of the EU bureaucracy is likely to now prosper relative to its EU brothers.

There are now so many problems in the EU but the biggest and the most urgent one is clearly the financial system. Most European banks would be bankrupt if they valued their toxic assets at market rather than maturity value. Currently many European banks are on the verge of failure whether it is German, Greek, Italian, Spanish, Portuguese or French banks. Share prices of many major European banks are down 80-95% which clearly indicates that the markets consider their chances of survival to be very small. Deutsche Bank is one example which some of us identified a few years ago as a bank that is unlikely to survive. Its market value is now less than 1% of its balance sheet. With $60 trillion in virtually worthless derivatives, the German government will need to print a lot of money to postpone the inevitable demise of Deutsche. I don’t think that the German government will let DB fail before Germany does. Thus they are likely to fall together at some future point. The situation is the same for many other European banks so Draghi will have to use all his wisdom to save the European financial system. This means he will print unlimited amounts of money in coming years. But that will not have any effect. You can solve a debt problem by adding more debt. Thus “wise man” Draghi will sadly fail in his attempt to save Europe.

China’s credit expansion – a time bomb?
What about China’s Li, does he stand a chance? He has an impossible task. China’s spectacular growth has been accompanied by an even more spectacular increase in debt. China’s debt has exploded from $2 trillion to $35T this century. A lot of that is in the shadow banking system and total bad debts are 10X higher than officially admitted. The slowdown in world trade this year is also going to affect China badly. The collapse of one Hanjin Shipping, one of the largest shipping companies in the world, is clear evidence of the downturn in global trade. Shipping rates for a container from Asia to Europe are now down to $760. Breakeven is $1,400 per container. The largest shipping companies are projected to lose up to $20 trillion this year. The main reason for this is what is happening in China. Sadly, China fell into the Western pattern of expanding credit irresponsibly and spending a major part of the money on speculative investments that will fail. The bad debt in China will lead to major defaults, money printing and a fall of the yuan. Yes, the Chinese are wise and they do realise the importance of gold. That is why they will probably emerge from the coming economic debacle better than many countries, barring major political upheaval. Li and his successors will need all their Chinese wisdom to survive the coming ears.

Japan – a basket case?
Turning to Japan, there is absolutely no wisdom in Abenomics. As a matter of fact, it is a Kamikaze strategy that is guaranteed to lead to the Japanese economy falling into the Pacific. A country that since the 1990s has used up all its savings, had zero or negative interest rates and then printed more money than any major nation and still can’t grow, is doomed to fail. The Bank of Japan is holding 50% of all Japanese debt and is buying all the debt they issue which is Yen 80 trillion ($0.8T) a year. This is of course the ultimate Ponzi scheme to issue debt at negative rates and then to buy it all yourself. Abe clearly gets no prize for his wisdom. 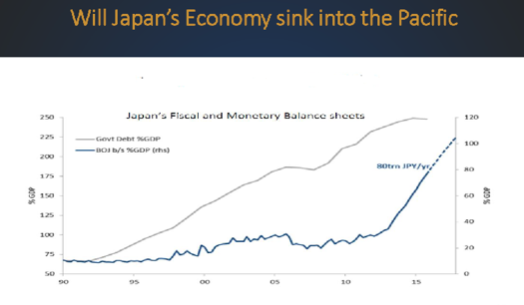 Finally, we have Janet Yellen. With three not so wise men around the world, does she add some wisdom to save the world financial system? 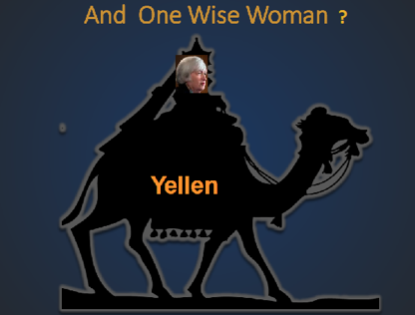 Let’s just look back and see how the US got to where they are now. The US was a super power until the 1960s but then wars, deficits and debts starting to take their toll. But by having the world’s reserve currency, the US could ignore the decline in the economy and just issue more of its currency. To be linked to gold at $35 per ounce was of course a major inconvenience. This made it difficult to print unlimited amounts, especially since astute leaders like de Gaulle asked the US to pay their debts to France in gold. But Nixon was desperate to borrow and print money so he decided to get rid of the inconvenient tie to gold. That was the beginning of the final phase of the destruction of all paper money and with it the world economy.

Gold up 38x since 1971
One of the reasons why Western governments don’t like gold is that the price of gold reveals their deceitful actions in destroying the value of the currency. And this is exactly what happened to the dollar after 15 August 1971 when it was no longer backed by gold. It took 9 years for gold to go up 24X to $850 in January 1980. After a long correction that lasted until 1999, gold has resumed its uptrend and is now up 38X in dollars. This means that the dollar has lost 97% of its value in real terms, which is gold, in the last 45 years. With gold no longer backing any currency, it is a free for all for irresponsible governments and central banks to borrow and print any amount of money. Since Reagan became president in 1981, US debt has gone from $0.9 trillion to $19.6T. Before Obama hands over to Trump/Clinton in January, he will have set the all-time record of increasing US debt a staggering $10 trillion from $10T to $20T. But that is chicken feed compared to what Trump/Clinton will need to do to try to save the US economy and the financial system.

The US is still hanging on to the super power position by its nails although it requires ever increasing amounts of debt. With the help of its reserve currency status, the US empire has dominated the world financial system not just with the dollar but also by creating powerful banking empires. This is a plan that was established in connection with the foundation of the Fed in 1913. Through international regulations like FATCA and Automatic Exchange of Bank Information, US authorities are tightening the grip on the financial system.

So Yellen has inherited a hopeless situation and her Fedspeak makes it totally clear that she hasn’t got a clue what to do. Since the December Fed meeting, she has indicated consistently that rates will be raised and nine months later, this has not happened. The Fed speaks with a forked tongue. They want to be all things to all men and therefore they say one thing to please some people and then they do something different because they know that the US economy cannot take an interest rise currently. With $14 trillion of Sovereign debt carrying negative rates, the US is not in a situation to raise rates. Not only would it cause the stock market to fall before the election but it would also cause major stress for the global financial system.

So Yellen’s situation is hopeless. She is central bank head of the most indebted country in the world with absolutely no chance of ever repaying these debts. With derivatives and unfunded liabilities approaching $2 quadrillion she would require a wisdom that she does not possess. Not that anyone else could solve it either. The only solution would be Deus ex Machina but even this is not likely.

Thus the four “wise” individuals with the power and position to save the world from the biggest collapse in history neither have the understanding of the problem, nor the tools to prevent the inevitable fall of the financial system. But that won’t stop them from trying. They will do the only thing they know which is to print money of a magnitude that the world has never seen before leading to“the final and total catastrophe of the currency system involved.” I doubt it will take 476 years this time!

Physical gold and silver will continue to reflect the destruction of paper money and also act as the best wealth protection available. At today’s price gold is a gift. We are likely to see levels that are unimaginable in future years.

The only question is the dam timing, could be another 10 years before it goes up, it may go much lower than it is now, we all have underestimated tptb and their fraud

southfork said:
... could be another 10 years before it [Au] goes up
Click to expand...
or AnOther 17 years

Metalophile said:
Is Pt an even bigger gift? It is now $313/oz below Au.
Click to expand...
That's what I am trying to figure out. If the unusually low price of platinum is due to low manufacturing demand....then shouldn't silver be a lot lower also?

When/If the silver to platinum ratio dips below 45/1, I'll start trading some silver for platinum.

We're fortunate... saw a post somewhere about the current price of gold in Egyptian pounds being the equivalent of around 2000frn/oz.