The Democrats Are in Bed with China, Literally

Fun read.
The Democrats Are in Bed with China, Literally
Kurt Schlichter | Dec 10, 2020 12:01 AM
The opinions expressed by columnists are their own and do not necessarily represent the views of Townhall.com. 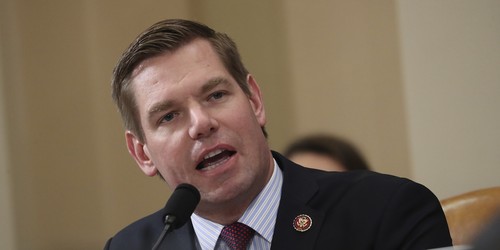 The most shocking thing about the recent news story that flatulent Russiagate hoaxer and American-nuking enthusiast Rep. Eric Swalwell was caught intertwined with a Chinese honey pot is...well, actually nothing about it is shocking. This is totally on-brand for the Dems and especially this particular clown. It’s not clear how far he got with this Democrat-diddling doxie, but the best case for Swalwell is that he was a fool who couldn’t see how unlikely it was for a DC 8 (and real world 5) to want anything to do with him other than as a mark. The worst case is that he eagerly betrayed his country for a roll in the rice with this Beijing bimbo.

Either way, he’s a disgrace.

But this singularly unaccomplished punch-line, this aspiring Beto without the hype or substance (Swalwell’s status as a furry is unknown, but I have my suspicions), is all too representative of his garbage party. The fact is that Red China is delighted by the opportunity to get back to business as usual with a Democrat administration – and in the case of a potential President Biden*, that’s literally business as usual. The garbage media didn’t think his crack-huffing, loser spawn being owned by Chinese intel –you think they don’t have tape of him living out his X-rated video of David Bowie’s 80s hit?– was significant enough to tell us about. But then, like the rest of the establishment, the media’s corporate owners are all wrapped up with the Chi-Coms. When’s the last time you saw Hollywood take a stand against the Chinese commies? That would be about the last time you saw Richard Gere on the big screen, since his career died when he did a movie pointing out their oppression of Tibet. Go look on Netflix or wherever – there’s plenty of stupid woke trash about how America sucks, but nobody talks about the big Red Panda in the room. The corporations know who their real boss is.

And, as Tucker pointed out in a great monologue, the Establishment is all-in on catering to the commies. It is bought and paid for, owned and happy, and dedicated to selling you out. And a President Biden*, in the event he is inaugurated, will happily continue the fire sale of American physical, intellectual, and moral assets to the reds.


This has happened before. The Roman elite was regularly bought off by rich foreigners, who showed up and found all the Senators with their grubby palms out and “Orfay Alesay” signs pinned to their togas. And we all know what happened to the Roman Republic. Well, actually a lot of us don’t because we went to public schools and our teachers were more focused on trying to get us to change genders than on such mundane things as “learning” and “teaching.” Bottom line – it did not end well.

As Glenn “Instapundit” Reynolds has observed, we used to export our values and now our terrible pseudo-elite seems intent on importing the Chinese communists’ values to replace the American ones that limit the ruling caste’s power. Have you noticed that our elite seems to want us less free, under tighter control, and without the ability to dissent? They have seen the future, and it looks like a Uighur labor camp filled with Americans toiling to make billionaires from New York and California even richer.

China is seeking to supplant America as the dominant superpower, and it is serious. We – at least our feckless and incompetent ruling caste – are not serious about maintaining America’s position in the world. The Chinese are building up their military, and I expect that they have a better than even chance of beating us in a fight in the Western Pacific today. They will certainly overtake us in the near-term. They will also overtake us economically, particularly if we both ship them all our intellectual property, outsource all our manufacturing, and cut our own throats by eliminating our ability to generate energy as some sort of bizarre sacrifice to the pagan weather gods worshipped by the swells in Marin County and Manhattan.


What do we need to do? As a society, we must recognize that Red China is our enemy, and reject the idiocy of allowing Peking’s puppies to characterize every accurate assessment of the Chi-Com threat as “racism” – what’s our ally Taiwan, chopped liver? We need to assess, target, and eliminate the Chinese intelligence operations designed to infiltrate our military, our industry, our academia, and our political class. The first step to that is to stop denying the threat is real. The second is to send the “students,” “academics,” and other infiltrators home – and to ruthlessly root out the people they have corrupted and enlisted as agents here. Sure, it may cramp Swalwell’s style worse than a double dose of Beano, but we’re willing to sacrifice his and his lonely pals’ hot honeypot action for the sake of keeping America free.

Resistance to Red China has got to be one of the key woke Republican avenues of attack over the next two and four years – we must establish ourselves as America’s fortress against the communist assault. Some Republicans will still shill for the Chinese (can you say Mitt Bain Romney?), and most Democrats will too, though we may find some allies of convenience. We must highlight the collaborators in our media, since the mainstream media will be all-in for their Beijing bosses. And we must let the voters know that a vote for us is a vote for America, and simultaneously for the likes of Swalwell to have less chance of scoring.


One thing we have going for us is the residual patriotism of normal Americans. Try as they might, the garbage elite has yet to wring out all of the love of country among normal people and replace it with some gooey “citizen of the world” nonsense designed to make it easier for these globalist losers to exploit us. We do not want to be a colony of Red China. We are America, and that still means something.

After all, not all of us are gaseous bozos who swoon when some foreign tart bats her eyelashes.

Barbara Boxter [former Senator from Kalifornia] has made it official, she is a Registered Chinese Agent.

She has no shame.