The Lows in Gold are Behind Us: Celebrate The Return Of The Bull Michael Ballanger

The Lows in Gold are Behind Us: Celebrate The Return Of The Bull
Michael Ballanger 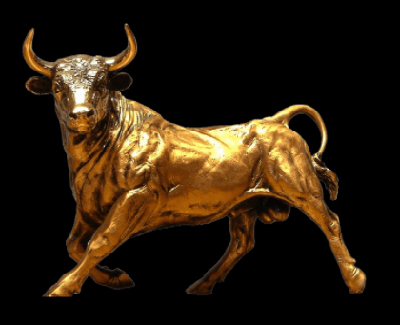 I had not intended to hit the keyboard today, having worked all week to prepare the Special Situations Report on my top-performing Norseman Silver Ltd. (NOC:TSX.V) (whose 65% year-to-date advance and 869% advance since the March 2020 lows has been a pleasant surprise), but Friday’s COT (Commitments of Traders) report grabbed me by the throat and slammed me into the chair.

The bullion bank behemoths that manage gold prices in the Crimex futures pits are particularly adept at bullying, and unlike the schoolyard, where bulging biceps and menacing unibrows command fear and obedience, it is the bulging wallets that send the meek scurrying for cover. I have watched the COT over the years, and whereas I used to make all trading decisions from the COT numbers, that has tempered somewhat since the world went into “manic mode” with the arrival of that nasty flu bug a little over a year ago.

Had I let the actions of the bullion banks be the sole determinant of my trading decisions last March, the 375,000-contract net short position would have sent me screaming under the bed. Fortunately for me (and those that follow me), other inputs weighed in heavily and it was the weekend of March 14–15 of last year that I ignored the Commercials and went “all-in.” As they say, the rest is history. The biggest rally in the miners in many years ensued and one of the best performance years since 2011 unfolded, and continues here in 2021.

However, it was November 2015 that the movement of the Commercial Cretins was critical to identifying the end of the 2011–2015 Great Bear Market in gold, silver and the precious metals equities. For a very brief period in very early December of that year, commercial traders actually went long the Crimex futures markets (and they never go long), after covering shorts week after week from late summer right up until the end of November.

Back then, it was not only the number of aggregate shorts but also the ferocity of the directional move that was the “tell”; the bullion bank behemoths were relentless buyers displaying a highly abnormal behavioral bias that was the “starter’s pistol” for the new bull market in gold. 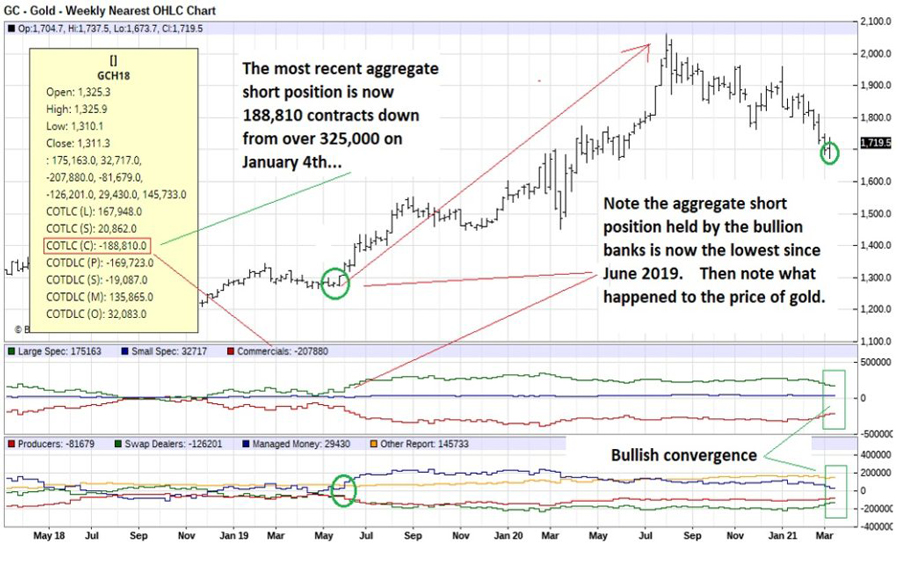 Because I issued a “BUY” on gold last Monday morning at US$1,680 (only after generously self-medicating during breakfast), I decided that I wanted to add to the positions, but before doing so, I wanted to do some work on the COT. So, I made a note to pick up the 3:30 p.m. bulletin to get a sense of just how urgent the bullion banks had become in their newfound bullish bent. The chart you are looking at is not an “End of the Bear Market” type, but more of an “End of the Correction” type, with aggregate shorts held by the bullion bank bullies collapsing at a rapid rate into last Tuesday.

Now, we will not get the action from Friday’s $25 air pocket until next week, but watching April Gold move late day from US$1,696.60 to US$1,728.00 reeked of desperation from those that are short wanting to be “less short,” with little time to do so. It had all the malodorous trappings of the Commercial Cretins. 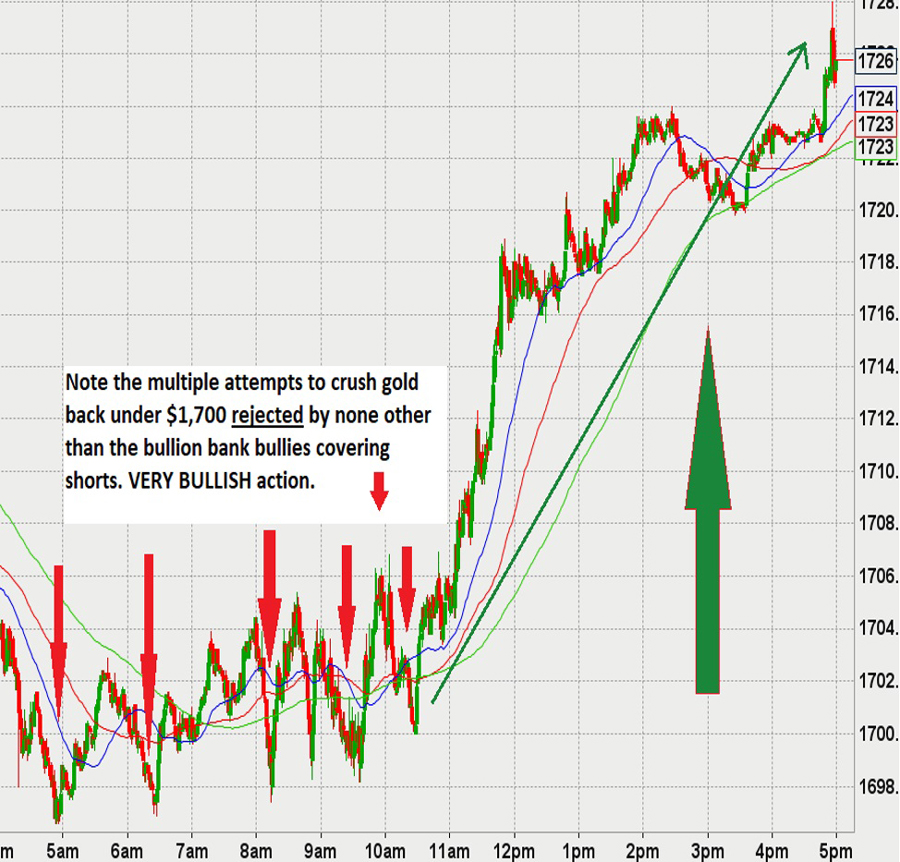 I maintain that the lows for the correction are now behind us and that you can reload your favorite gold miners with reckless abandon. I continue to favor the developers and want to point out that GGMA favorite Getchell Gold Corp. (GTCH:CSE; GGLDF:OTCQB) has now finally caught the “correction bug,” and now sits 30% from its 52-week high. Mind you, it is still ahead 340% from the March 2020 lows and trades at US$21.75 per ounce of in-ground gold, with the benchmark for “ounces in Nevada” at US$100. Since they are growing the resource through drilling, I see the current price as a gift and will be adding shortly.

While the rebound in energy prices has a number of the gold bugs all giddy about the inflation outlook, I would prefer that the number one cost input for the gold miners be moderating rather than spiking. It is important to remember that the 2001–2011 Commodities Supercycle, involving the Great Chinese infrastructure boom, included $100/barrel oil, and that was a margin pinch for many of the gold miners and the number one reason they underperformed after 2007. 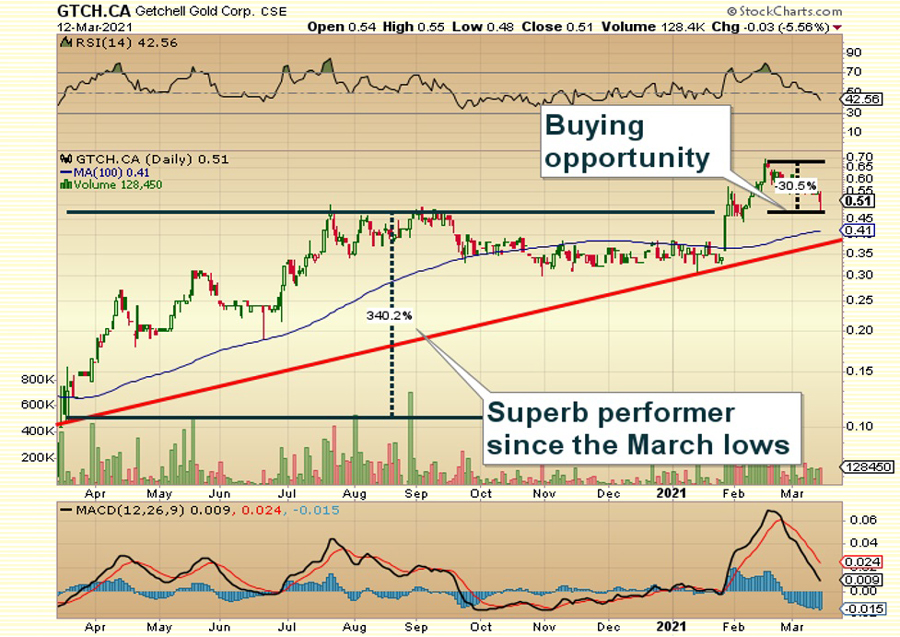 My trusty Rottweiler (Fido) has also provided an important “BUY” signal this week, as he has returned from his sanctuary under the tool shed, having avoided flying wine bottles and quote monitors that usually represent hazardous impediments during gold corrections. Bullseye targets with dart-ravaged images of bullion bankers and central bankers and investment bankers are now concealed from view and, with the window to the courtyard now repaired, the inhabitants of this abode are safe from the maniacal ravings of this author, always welcomed but rarely trusted by all.

And I can’t really blame them.

Follow Michael Ballanger on Twitter @MiningJunkie. He is the Editor and Publisher of The GGM Advisory Service and can be contacted at miningjunkie216@outlook.com for subscription information. 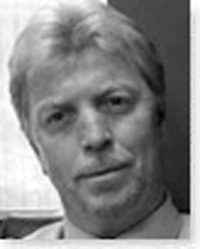 Originally trained during the inflationary 1970s, Michael Ballanger is a graduate of Saint Louis University where he earned a Bachelor of Science in finance and a Bachelor of Art in marketing before completing post-graduate work at the Wharton School of Finance. With more than 30 years of experience as a junior mining and exploration specialist, as well as a solid background in corporate finance, Ballanger's adherence to the concept of "Hard Assets" allows him to focus the practice on selecting opportunities in the global resource sector with emphasis on the precious metals exploration and development sector. Ballanger takes great pleasure in visiting mineral properties around the globe in the never-ending hunt for early-stage opportunities.
Click to expand...